You are here: Home / Valletta / Valletta in transit between past & present 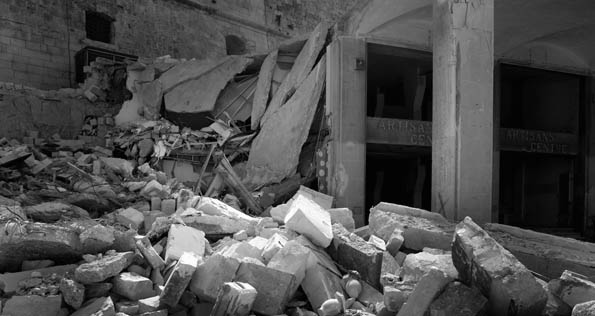 Valletta in TRANSIT: down with the 20th century, up with 21st Century and long live the C16th?

The Renzo Piano project to redevelop Valletta’s city gate area has proved somewhat controversial even now that it’s well under way. Fast forward a few years though and imagine the development done and people going about their lives within it. What will remain in our memories of what’s there now (just) and how will we use the city gate spaces differently? What social changes will the new architecture bring? And will they be for better or worse?

The TRANSIT project – a collaboration among academics and creatives – aims to help us find out. We talk to one of its members, David Pisani, about TRANSIT. David is one of Malta’s foremost photographers and lives in Valletta. Many of his photos of the city documenting its changes were chosen to form part of the French National Collection. He is renowned for his works capturing architecture and cities – in particular his porfolios ‘Vanishing Valletta’, and of Dubai.

Q. You have long documented Valletta (over some 20 years). When you published your collection ‘Vanishing Valletta’ in 2007, you said that perhaps it was time to move your lens on from the city. A kind of closure on Valletta. What drew you back to documenting the Valletta of today?

I keep saying that, then I keep going back to the site. The changes around city gate, which is what TRANSIT is focusing on are a huge change for Valletta and I wanted to be there to document them.

Q. TRANSIT is billed as an ‘urban art study on the social and urban changes in the Valletta city gate project’. What exactly does that mean?

TRANSIT is not only about documenting – the central issues of the project deal with urban change, how they effect us, the way we interact with the city, and what their long term consequences may be. The health and longevity of a city depends on good urban planning and we felt that the Renzo Piano Project had been shrouded in so many petty political issues as to whether to rebuild the opera house and so on that the people who actual use city gate every day and the life that revolves around the site were completely ignored.

It’s an urban art study because we want to use art to create an awareness of the changes that are occuring; many of them are not about structural change, which is the obvious part but about a more complex change, or dialogue that goes on between the city and its inhabitants and visitors. The process of demolition is one of the key topics we are working on, on the blog we called it “Temporary Ruins”, and we look at how buildings take on transient forms of beauty as they are demolished, brief yet significat moments in the life of a building which, unless captured photographically, are lost forever.

We also ask questions about how demolitions effect our memory of a particular site, do we change as structures change? At what point does nostalgia set in? Is a site capable of preserving memory?

Q. What of Valletta’s claim to be a ‘city’? Malta is after all often called a city-state as Valletta has been the lifeblood of the islands.

Valletta is the capital city not because of its size but because of the social and political commitments it has been bestowed with. We make a point of this in one of the TRANSIT promotional cards where we quote Aristotle who said that ‘a great city is not to be confounded with a populous one’, which means scale is not an issue. Valletta is small but is has the same role and responsibilities to represent the nation as do Paris and London and Tokyo.

Q. TRANSIT sees you – the photographer – collaborate with an anthropologist, an artist and a film maker. Your partners also include the architectural practice behind City Gate. A real multi-disciplinary team of creatives. What combined ‘outputs’ are you generating and for whom and why?

Yes, this is a multi disciplinary project but all the participants are doing what they do best…in my case photography! The architects are instrumental in giving us the knowledge of what is going on inside the project, the design aspects and the demolition processes. We intend to have an exhibition of our work at the end of this year/beginning 2012 and we will also be publishing a book on the work we achieve. We hope the project will enlighten people to look at their urban realities with a greater sense of observation and not just at the bricks and mortar changes.

Q. Is TRANSIT neutral – a mere documenter of the evolution of Valletta as the new city gate area takes shape – or is it acting as a commentator?

We are politically neutral but we have our own ideas of how our cities can be improved and how the city dweller can also aspire to a better quality of life. The blog plays an important part in sharing our ideas as we look at urban change in other cities around the world and post comments on these, always with a reference to what is happening around city gate.

Q. What are your personal goals with TRANSIT? Does it signal a change in your own professional career?

No, not at all, it’s just an extension of what I do. I think that Valletta will change drastically because of the Renzo Piano Project and I want to catch it before it’s gone, much as I have done with the rest of Vanishing Valletta.

Q. What should we have asked you?

Why has such an important project largely ignored the social impact it will have?

TRANSIT is very much in favour of the Renzo Piano Project however the whole ordeal of getting it approved (which took almost 15 years) resulted in the project being Lost In Translation and the citizens and visitors who ultimately will inhabit the site (and the city as a whole) have been for the most part ignored. Or someone has simply assumed that everyone will be happy with the final result because nobody loved city gate anyway so anything was going to be better than that. This is a significant “blunder” because there is a whole life of commuters, hawkers, hanger-ons, bus drivers and more that bustles around the site. A closer study of the designs reveals that most of this will be simply removed, without questioning what the consequences of such a Hausmanian clean-slate approach will be.

Stay updated with the project through its blog: http://transitproject.tumblr.com

TRANSIT is funded by the Malta Arts Fund.