You are here: Home / Metal Malta 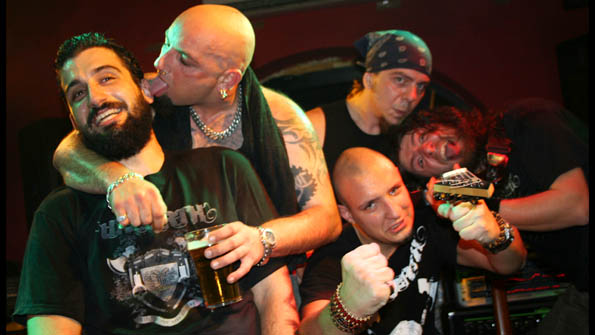 There is one sentiment that all Maltese metal fans are used to: surprise. Most people wouldn’t expect Malta, the island of sand, sea, sun and history, to have any metal bands at all. This is as far from the truth as you can get. The fact is, not only is there a strong metal scene locally, it is also one of very high caliber.

Maltese people far removed from the scene express similar feelings when hearing of the hard-working underground bands locally. But perhaps this makes sense, given that the metal scene is, by its very nature, seldom accessible to outsiders, this for myriad reasons, among which is the elitist nature of the music. In layman’s terms, ‘you have to be in it to get it’.

Being a metal fan and/or musician in Malta has both pros and cons. Truth be told, I racked my brain to find the positives, but then, given the advent of the internet and the open communication it brought about, the cons have also dwindled.

The size of the island, and therefore of the population, is both a pro and a con. It is very easy to reach our equivalent of stardom, but after that there is no way the financial success of the band can be nurtured solely on local Euros, simply owing to the limited size of the audience. Even before the ‘days of ease’ of the Internet, Maltese bands were reaching out to Europe and the USA, and the cream of the crop enjoyed considerable success abroad. Suffice it to mention Beheaded and Forsaken, arguably Malta’s biggest metal exports, both of whom have signed deals with prestigious labels and have gathered followings as far as Texas and Japan.

A good friend of mine from the UK confessed on interview that in his view “Maltese metal bands are at least 50% better than their UK counterparts”. Although this is only one man’s opinion, it is an informed one, given that he and his band SLAB played in Malta in April 2009, with a few bands handpicked for their consistency and hard work.

Any ambitious band of any style should not be satisfied with catering to the Maltese alone. Even the largest of audiences here is child’s play compared to abroad, so if the point of playing is to showcase one’s music to as many listeners as possible, abroad we must go. This is a headache to most bands, as there is no support of any kind for bands with touring commitments, especially bands of the metal strain.

This brings me neatly to the issue of acceptance within a culture that is reputed to be close minded at best and primitive if we are to be crude. Although metal bands are not persecuted as others elsewhere are (check out Acrassicauda from Iraq and be thankful for our freedoms), they are hindered from achieving all they can by the lack of venues that accept metal bands, the absence of any financial support from anyone (in Sweden the regional governments pay rent for bands’ practice spaces, Belgian bands have their flights reimbursed if they prove to have played at least one gig in a foreign country) and the lack of belief in them, demonstrated by our post-colonial attitude of treating two-bit cover bands from the UK as gods among mere mortals and granting them headline spots in big events, while Maltese bands provide the ‘special guests’ segment, and are normally not even paid for their effort.

Furthermore, apart from a few notable deviants such as this site, Toni Sant’s MMI podcast and Michael Bugeja’s Sunday Times column, metal bands are largely ignored by all segments of the media, or relegated to the ‘special interest’ segments, which are the equivalent of a hamster on water skis.

This is not to say it all doom and gloom. I for one firmly believe in the talents and hard work of some Maltese bands (I won’t say all bands), in particular those with not only the technical nous in a musical sense, but also with the good sense and creativity to turn adversity around and into their favour. As I once read, “Artists don’t have to suffer. Clueless no-talent dumb-f..ks who call themselves artists have to suffer!”

Mark Debono is an online marketing minion and plays bass for Loathe, a newly-signed metal band. Mark has toured the UK extensively with Loathe and was interviewed by the UK’s largest rock and metal radio, Kerrang, while on tour In November 2009. For more on Loathe, check the website, join them on Facebook or follow them on Twitter.