You are here: Home / Theatre / Interview with Malta’s ‘Shirley Valentine’

‘Shirley Valentine’ is a famous name among fictional characters; the middle-aged housewife, bored with life and husband, and cooking up his proverbial egg n’ chips in a back-to-back terrace in Liverpool.  Ditch the Liverpudlian setting and there are no doubt millions of women worldwide who associate themselves with Shirley… and are desperately hoping to land that impromptu holiday (without hubby, but with romance) to turn their domestic-drudge lives upside down.

Willy Russell’s one-hander play opens 1st May in Malta at the MADC Club Rooms in Santa Venera, and runs for two consecutive weekends (1-4 and 9-11 May, booking details end of post).  The actor cast as Shirley is a consummate pro of the Maltese stage, Isabel Warrington; a talented lady whose own life is so far removed from the ‘stuck in the rut’ version of Shirley’s that we were curious to find out more about the challenges of her latest incarnation treading the boards; and about why she thinks this play resonates with men as well!

I’ve been involved in the theatre since the age of 18, when I started taking classes in jazz dance. At the age of 26, I spent a year in Scotland studying art, and on my return, I started working as a graphic designer with a local publishing house. I worked in the publishing industry for about 10 years, designing some of the most well-known magazines and newspapers on the island. I then branched out on my own and started exploring new avenues in design and marketing, and also published my own magazine, Pjazza. Throughout this time I also focused on my acting career. Four years ago I fulfilled another long-term dream of becoming an aerobics instructor which is another aspect of my life that gives me a lot of satisfaction. So now I juggle graphic design, marketing and PR services, aerobics instruction, theatre and painting… and everything else in between! 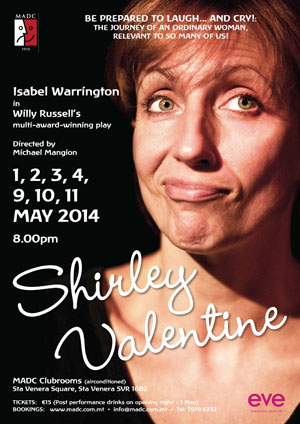 We hear a lot about the struggles actors go through in the beginning of their careers. What made you realise you had acting in you?

Well, I suppose establishing yourself as an actor comes with time and experience. You learn what you are good at and you experiment and try out new things and keep challenging yourself. No matter how long you have been acting for, you never know enough and I feel it’s important to get out of your comfort zone and challenge yourself, otherwise, like with everything else in life, you end up stuck in a rut. In the case of acting, you become type cast and fall into doing what’s comfortable.

I started acting relatively late, when I was about 26. It wasn’t something I was consciously aware I wanted to do, but when I tried it, it felt natural. I knew I had a lot to learn by way of technique, however I stuck at it, taking on various roles and participating in acting workshops, and with time I was offered roles that were more and more challenging and fulfilling.

I think you either are an actor or you’re not, just like you are an artist or not. Then again, some actors are more inclined to certain genres than others. A lot of it boils down to talent, the rest is about enjoying what you do and being open to the fact that you will carry on learning till the day you die.

What attracts you to certain roles and not others?

I like a script that challenges me and that gives me the opportunity to grow as an actor. One that is well written and has the potential of engaging an audience, whatever the subject matter. I admit though, that I don’t like gratuitous violence, nudity or sex just for the sake of shocking audiences or selling a show. I wouldn’t even watch a show like that myself, so I wouldn’t like to give that to an audience. Part of the joy of acting is giving your audience the chance to remove themselves from real life for a short while. It’s all about your ability to tell a story in the most authentic way possible so that your audience is as immersed in it as you are.

How do you separate yourself from your characters?

Very easily. I am quite sure of who I am in real life, so I don’t have any problems differentiating the two. However, when it comes to creating a character in a play, I do draw on my own experiences and emotions in order to make the role more authentic. Becoming the character requires focus and being in the moment. It also involves delving deeper into the character – imagining their environment, their lifestyle, the people around them, their circumstances, giving them a past, so to speak, and a possible future. That way you can understand where they are coming from and it enables you to make them as credible and as real as possible.

What have been the highlights in your career so far?

I’ve been very lucky to have had quite a few highlights. However, some of my favourite roles have been Audrey in ‘Little Shop of Horrors‘. She was a very sweet character and the whole show had an eerie kind of feel about it. The lyrics of the songs were hilarious but also had dark undertones which made it a bit weird. “Company‘ was another wonderful production. I found the music pretty challenging as I’ve had minimal training as a singer, but I was pretty chuffed to be cast in that. The way the show was choreographed and how each scene flowed was a real joy to be part of. ‘Chicago‘ was definitely my favourite musical. I played the part of Velma Kelly which I absolutely loved. She was a brassy American convict and it was so much fun. ‘The Goat or Who is Sylvia‘ was another highlight. The play required a lot of energy and I had one scene where I had to wreck the whole set singlehandedly. It was at St James Cavalier so it was quite funny to see the audience look pretty uneasy as they watched this crazy woman breaking plates and furniture a couple of feet away from them. There’s so many more experiences that I could mention but it would probably need to be published in book form if I had to go on.

‘Shirley Valentine’ seems like a play which will speak to a lot of women in terms of self discovery. How do you think men can relate to such a play?

Whenever people say that the play appeals only to women, I tend to disagree. The story is portrayed by a woman, however I know many men who have gone through similar experiences, nothing necessarily to do with marriage or relationships. The overall theme of the play is about how easy it is to get stuck in a rut, and how so many of us stay there because we are afraid to break the mold and see what’s beyond. Some people get the courage to change, and others stay in their rut and go through their lives always wondering how it could have been if they changed their circumstance. The play talks a lot about the frustration of being in that place, and it also explores the joy of breaking out and rediscovering that there’s more to life than what our preconceived expectations taught us.

You are well known for your positive attitude and humour; does ‘Shirley Valentine’ as a character come close to your own self?

If I had to meet Shirley Valentine and have a conversation with her, yes, there would be quite a few similarities in our life experiences and possibly in our characters too. 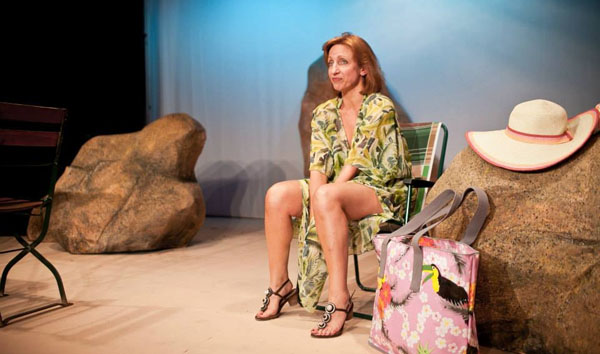 What advice would you give to local artists, who find the balance between a ‘paying job’ and their art – be it acting, writing, singing, dancing, painting – daunting and difficult to keep up?

I would tell them – whatever you do, keep doing what you ENJOY !! If you enjoy something then you do it well and it gives you a purpose in life. Yes, it can be challenging and even frustrating at times, and yes bills have to be paid, but the sheer pleasure you get from doing it far outweighs the cons. I gave up a secure job working in a bank when I was 27 years old. It took me 8 years to pluck up the courage to do it. I was terrified at first, but once I did, I never looked back. For the last 7 years or so, I have worked solely in the creative industry, which is where my talents lie, and I have learned so much and grown beyond my wildest dreams. I now make a living from it – yes, there are things I enjoy less than others, but they also allow me to do the things I have more passion for. Every choice in life presents highs and lows, but when you are doing what you love, you know you are in the right place, and it makes life so much more rewarding. Persevere, and stay focused on your goals, and with time you’ll get there. What is most important is that you ENJOY the ride and you’ll be surprised where it takes you. The world needs art because it makes it a much more stimulating place to live in. Listen more to your own inner voice and less to what others have to say. Take direction from people who are on the same wavelength as you because there’s less risk of them thinking you’re crazy. And anyway, it’s liberating to be a bit crazy sometimes.

Since you are always taking on new projects and challenges, what can we expect from Isabel Warrington in the near future?

Well your guess is as good as mine. I am always on the lookout for things that stimulate me and my head is full of ideas. When I see an opportunity that I think will appeal to me I grab it with both hands and go with it. That’s the beauty of the life I’ve chosen – I never really know what’s coming next, but it all seems to work out in the end and the ride is amazing. Bored is not a word I use often because there’s never a dull moment. I am really looking forward to the run of  ‘Shirley Valentine’ and then having some evenings to myself again afterwards. Knowing myself, though, that won’t last very long as I’ll just embark on the next project.