You are here: Home / Theatre / Burlesque in Malta – dare to laugh

Burlesque brought to us by the Creative Island Dazzle Troupe has been around since 2008. Their shows are of the variety kind with a sequence of mini sketches from comedy to music and dance. Satire and bawdiness are the order of the day; the dark humour lends itself well to an audience which is looking for an intelligent laugh accompanied by raised eyebrows.  This particular rendering of Burlesque is totally in line with Dazzle Troupe’s overall philosophy, according to Teodor Reljic, a sketch co-writer:

“The Burlesque Inquisition’ will provide something which is a middle ground between high-brow theatre and outright farce”.

Behind the scenes on the Creative Process

The creative process goes through several stages, as Nicole Cuschieri, the producer and director, described to us. Firstly she pens a theme which she wants to see on stage, such as the current one, the Inquisition. It is usually a theme revolving around a particular period in time, such as the Middle Ages which she has always found fascinating. Then, Nicole gets together with the long-standing members of the Troupe and together they brainstorm and create different sketches. Each performer then comes up with their own musical, dance number or script, either working on their own or with the other members. Having become very close and tight-knit, the Troupers make it a point to work with different partners so that the group dynamic is constantly evolving. 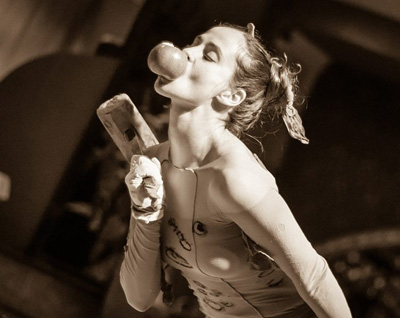 Dazzle Troupe so far has produced 10 of these shows which have become Maltese cultural must-watch events for various reasons. The venues are found all over the island, with the initial four Burlesque sets having been in Valletta. Most shows are an integral part of the venue, such as ‘The Pirate Monster Cruise’ which was held at The Black Pearl, and the ‘World War II’ performed at the British Legion Bar. Tying the performance to a venue in this way makes the experience immersive and fun.

‘The Burlesque Inquisition’ is set in the Nigret Knight Club in Rabat, taking us back to a time between the Middle Ages and the Renaissance. We can already feel the broiling of sins in the air. There’s to be a judgement of a group of heretics who will have to dance, make merry and entertain – practically performing for their lives! Otherwise they will be sent straight to hell by auto-da-fe (human matchstick). WhatsTheirNames Theatre group including Nathan Brimmer, Philip Leone Ganado, Yannick Massa and Joe Depasquale will also be performing two other short sketches, and their style is distinctly characterised by a British sense of humour, think Monthy Python in Black Adder. 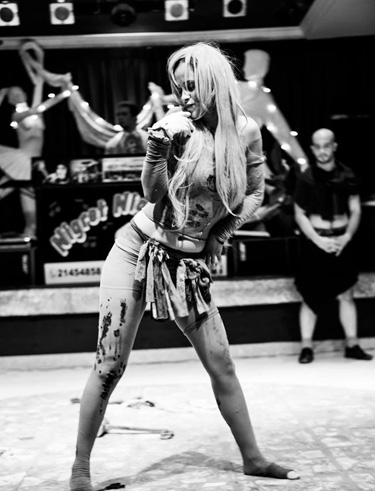 The come on! Dare she, dare you? [Photo: icreatemotion / Francesca]

An Inquisitor will be heading the show; Joseph Zammit will be ‘the judge’ who is a Medieval version of Simon Cowell while at the same time mimicking the singer Prince in his famous flamboyance and pomposity. You can expect this character to be camp and snide, passing mean asides between each act while getting hot under the collar for some of the male performers. Rambert Attard will be playing his lackey, and something is clearly going on between these two! The Inquisitor will eventually ‘abuse’ the court jester, which dancer Sarah Lanzon will be performing as with quite a bawdy number. There will also be Franciscus Populus, Alex Vella Gregory’s alter ego, who will be the musician on the night, delighting the audience with satirical songs (one will be quite topical and political nudge nudge). This diva in the making will be accompanied by other just as entertaining characters, such as Leona Gold the cross dressing knight played by the fabulous Dazzle Troupe resident Kevin Canter, who will be dancing and stripping to some trademark tunes. Be prepared for a baffling and amusing interlude, the mini-play that a group of nuns, released from their cloistered nunnery for just one day, will be playing for the Inquisitor. Things will go awry and the nuns will have to improvise in this sketch, written and performed by Vee Stivala, Becky D’Ugo, Miriam Calleja and Marie Claire Pellegrini, and co written by Teodor. A piece of raunchy ‘performance art’ will also be performed by Marie Claire Camilleri – ‘The Suckling Pig’. She will be performing a farcical ‘striptease’, watch out for a highly ‘creative’ use of bacon strips! This show will be an illustration of the elements which the Middle Ages are known for: tragic and barbaric yet colourful events.

Burlesque is an extremely satirical concept, and it is much needed locally. It challenges topics which traditionally bring tension when discussed, such as religion, politics and prejudice. All this is dealt with in a humorous manner, inviting us to enjoy and relax with usually fraught subjects.

‘The Burlesque Inquisition’ will be held on the 26th and 27th April at 9:00pm sharp.
You can purchase your tickets at Eur 15 from Creative Island.