Dr John Briffa is a renowned specialist in nutrition and weight loss. A practising doctor, consummate journalist, broadcaster and author, Dr Briffa lives and works in the UK where he was born to Maltese parents.

To anyone reading leading UK newspapers, Dr John Briffa needs little introduction.  He’s a former columnist for the Daily Mail and the Observer, and former contributing editor for Men’s Health magazine. He has authored for dozens of newspaper and magazine titles internationally, and is a previous recipient of the Health Journalist of the Year award in the UK.

His latest book ‘Escape the Diet Trap – lose weight for good without calorie counting, extensive exercise or hunger’ will be published in January in the UK. Dr Briffa is proud of his heritage and has chosen Malta as the first place in the world to reveal the ground-breaking concepts contained in the book. We’ve an exclusive Dr Briffa article here, based on insights from the book.

In partnership with Bryn Kennard of Body Works in Spinola Bay, he will be revealing the secret to lasting weight loss in the ‘Escape the Diet Trap’ workshop, 12 November, at the Hotel Juliani, St Julians.  (Details & Booking info below.) See the Dr Briffa Bodyworks Workshop Programme (pdf download).

The Insights, the Theories, the Practice 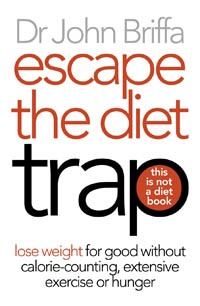 Time and time again the conventional approach to weight loss, ‘eat less, exercise more’, has been shown to be a dismal failure for those looking for long-term sustainable weight loss. It is normally put down to lack of will power or discipline when many fail to control their weight following endless cycles of eating less and exercising more. However, there is good reason to believe that it is not so much that diets don’t work, it’s that they can’t work.

Dr John’s premise is that eating less and exercising more goes against the fundamental design of the body. If calorie intake is cut, it can stall the metabolism as the body seeks to conserve energy. Not only that, when a cycle of eating less ends and normal eating patterns are resumed it can take three months or more for the metabolism to boot up to normal levels.

Studies have also shown that people who tend to eat less also tend to move less making the exercise part of the equation a much harder to sustain. The role of exercise in weight loss has been wildly overstated. In fact, studies clearly show that exercise is quite ineffective when it comes to weight loss. This is not to say that exercise is not important, on the contrary, it still plays a massive role in both aesthetics and health, it just means that it needs to work more intelligently as part of our overall wellness routines.

We asked Dr Briffa to explain a bit more about what’s going on here.

Q. The logic behind ‘Escape the Diet Trap’ seems so sound and such common sense why has it eluded us for so long?

Dr Briffa: Some of the misinformation regarding weight loss has come because the calorie principle – the idea that weight loss is an inevitable consequence of ‘eating less and exercising more’ is so persuasive. It makes so much sense. And when it doesn’t work (as is almost always the case in the long term), the tendency is to blame would-be slimmers rather than take another look at the theory and see if it stands up.

On top of this we have a food industry that has been able to peddle ‘slimming’ foods on faulty premises such as ‘low-calorie’, ‘low-fat’ or ‘lite’. This has further reinforced the idea that it’s only calories that count, and further led us down a path to failure.”

Q. Why Malta as the place to give a first public airing to the theories in ‘Escape the Diet Trap’?  Your Maltese roots aside, did Malta’s obesity statistics play a part in the decision?

Dr Briffa: Yes, to some degree the fact that Malta has an obesity issue was a motivating factor for me. Plus, as you say, my Maltese roots of which I’m very proud was a big draw. Yet, another factor, I think, was how deeply set the misinformation appears to be in Malta. As I’ll explain in the seminar, the fat phobia that abounds is likely to be actually driving the obesity epidemic. It breaks my heart to see so many people put effort into approaches that are essentially dooming them to failure. Malta is not alone in this, but my connection with the island and rates of obesity here all add to my desire to do something positive about the situation.

Q. What Eureka moment led you to take a holistic approach to wellness and health as your key area of interest in the health sector?

Dr Briffa: Soon after leaving medical school, I was working as a junior doctor and struggling with a few health issues of my own. I’d grown flabby during my six years at medical school and would often get crashing fatigue in the mid-late afternoon.

One morning, I found myself assessing an elderly man who had come in for a hernia operation, and I was struck by how well and vital he was. I asked him the secret of his success. He put a lot of it down to his diet. My early experiences and medical education meant that I’d never actually considered that diet might be important to wellbeing and health. The chance conversation that morning sufficiently piqued my interest for me to invest in a nutrition book that very day. I read it in a couple of sittings, and I think a light bulb came on. I set about changing my dire diet.

While I didn’t realise it at the time, what I ended up eating was a lower-carbohydrate, ‘primal’ diet. Within a couple of weeks I stopped having difficulty staying awake in the afternoon. And in six weeks, I lost all the excess baggage I’d accumulated over the preceding six years. Yet, I was not hungry and had not taken any additional exercise. This experience led to me thinking radically differently about what it takes to lose weight successfully, as well as the influence of diet on general well-being.

See Dr John Briffa in action on Saturday 12 November presenting the insights behind his new book. The Workshop runs 09.30 – 16.00, breakfast & lunch included. Price: €120, with Early Bird price of €95 if you book by end Wed. 9th November. Click the box below for details and booking form. See the Dr Briffa Workshop Programme 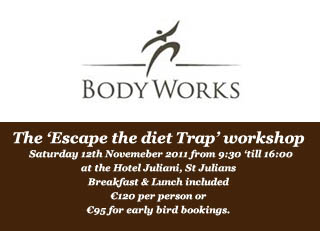