You are here: Home / Events & Festas / The Grateful Dead

There are cultures that are finely-tuned with all things spiritual; others that relish the protestant work ethic and treat death as a mild inconvenience. And then there are the Maltese. We love everything about death. Here are five reasons for my assertion:

1. Our churches come into their own during funerals. Statistically, Malta is close behind the Vatican in terms of number of churches per square km. If you live in the shadow of one, like I do in Siggiewi, you soon learn to live with the mournful toll of the 8am or 3pm funeral bell. Funerals are part and parcel of village life. Here, funeral corteges have taken to parking next to the statue of St Nicholas in the middle of the square, so that the pall-bearers can carry the flower-covered coffin up the square and up the stairs of the church. It’s like a Fellini movie every day, to the backdrop of the lady selling fish in the morning and the OAPs outside the band club in the afternoon. Without the regular conveyor belt of mourners and dead people, my village would lose much of its ‘village life’ and pjazza conversation pieces. And the church would lose a tad of its sense of importance, even to those who do not regularly show up for the Sunday service.

2. We love marble plaques.The quality of Maltese driving is such that Maltese roads regularly take their toll. Although the traffic fatality rate per head of population is still in line with other countries, you simply cannot ignore the ubiquitous marble plaques, photographs and candles on the road side. In my childhood, there was a black spot on the Burmarrad road that literally seemed to have run out of wall space for the plaques. I remember closing my eyes and shivering every time my father drove past it. We take a morbid delight in remembering our loved ones where they came to a sudden end. In technicolour shots and weatherproof marble. Unbelievably, we even emigrate with the concept of the plaque. There’s one at a major road intersection on the outskirts of Portsmouth, UK, and the name on it is Maltese.

3. We love obituaries.Yes, every nation has its columns in its national rag. But we also have the morning Radio Malta solemn announcements of the newly-departed, replete with the same screeching violins that used to scare the living daylights out of me as a kid. The only thing that has changed is that the guy who used to read the obits has himself passed away and been replaced by more dulcit female tones. Definitely one to be avoided.

4. We have the Adolorata Cemetery. We choose to locate our national cemetery in Marsa, right in the middle of the most urban part of Malta, home to the giant roundabout and its intersections. A place replete with huge conifers straight out of The Omen, a city of red candles by night and busy trade in flower merchandise by day. The last prayers are said to a dull hum of diesel engines and screeching brakes. I always thought that everybody’s hotel needed to be relocated somewhere more serene and green. Sadly, it’s too late for all of that.

5. We love our black hearses. Until a few years ago, you could be on your way to your last your journey in a 1950s number with a number plate RIP007. It took some lobbying to explain to the undertakers that mixing James Bond with eternal peace is not quite a cocktail made in heaven. In 2008, Government’s attempt to break the undertakers’ cartel was met by a nation-wide strike by buses, mini-buses and taxis on the basis that this was ‘the first step at abolishing monopoly in all sectors of public transport.’ Now, the ubiquitous ‘RIP’ has now been replaced by the more discrete acronym:’HRS’. (For an explanation of Maltese number plates, click here).

But, for all our addoration of rituals for the departed, we, the living, can only speculate as to whether they are a grateful dead. 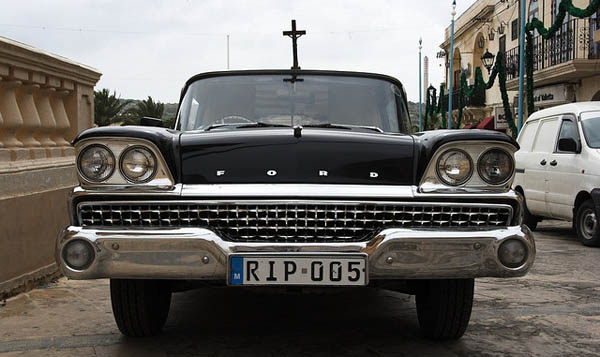 The last ride as it used to be. Old-style Maltese hearse.