You are here: Home / A breath of Malta’s fresh air? 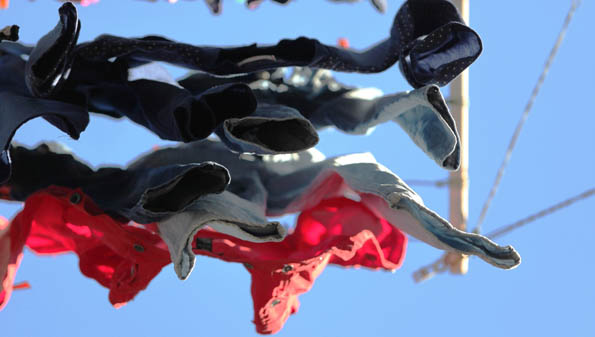 Hung out to dry, but how clean will they be later?

“Oh, pollution, well, it all blows away thankfully, since it’s nearly always windy in Malta.” This was how one friend answered my query about air pollution when I arrived in Malta years back. We’d been walking up Bisazza Street in Sliema, shrouded in diesel smoke belching from the passing buses. Today, it’s pretty much the same, although some buses are a bit newer.

Back then too, in the early ’90s, the location of the then new power station was still a hot topic. While its site was chosen, apparently, to mitigate the power station’s environmental impact, the landmark chimney just happened to rear up a few metres from former Labour prime minster Dom Mintoff’s villa.

Since Malta’s EU membership, environmental issues are taking centre stage more frequently and are less likely to be dismissed in a partisan or jokey fashion. A topic never far from the media is the high incidence of asthma in Malta and its linkage to air pollution and particle inhalation.

Several NGOs – Flimkien għal Ambjent Aħjar, Friends of the Earth, Birdlife Malta, Din l-Art Ħelwa, Greenhouse, NatureTrust Malta, and the Ramblers’ Association of Malta – have joined forces in recent weeks to petition the Malta Transport Authority (ADT) to do more (or at least use their current powers more effectively) to curb illegally high vehicle emission levels. The belching buses are a visible reminder that however many years pass, plus ça change…!

When it comes to the effects of particle emissions on the health of the nation, Malta has more sinister visible signs. Benchmarking Malta’s asthma rates internationally, we find that the islands have among the highest incidence of asthma in the Mediterranean, and place around third in European league tables. Our heavy reliance on fossil fuels for transport, energy and industry is taking its toll. For example, St Anne’s Street (the main thoroughfare in Floriana) is likely the most toxic street in Malta, according to statistics compiled by the planning authority. The street harbours three nasties – particulate matter; benzene; and nitrogen dioxide – in levels which far exceed those the EU deems acceptable.

Flimkien għal Ambjent Aħjar, the new kid on the block in Malta’s environmental lobby, has the energy of youth to not let the authorites off the hook. It has the bit between its teeth now on the air pollution/particle issue and is hounding the government over its decision to seek exemption from EU rules on air quality and PM10 particulate traffic pollution until mid-2011. Whether you’re an active environmentalist or not, it’s clear that Malta, despite its wind-swept location, has serious air quality problems. And, unlike our winter storms giving way to summer again, these toxic clouds won’t be going away easily.