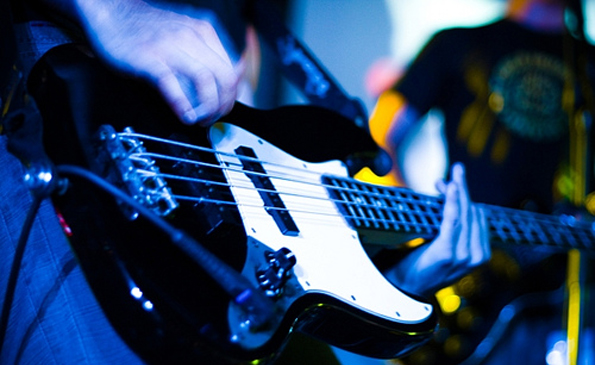 A clan of loud rugby lads chant “Freddie Portelli! Freddie Portelli! Morru ’l hemm” while chugging down their beers. The rest of us watch bemused as we wait for what’s promising to be a night of raw musical talent in Malta. And there’s no sign of the iconic Freddie Portelli either.

It all happened last Wednesday at Hacienda, in Baystreet, Paceville. A night called “Lucinda presents”, where Lucinda herself never turned up, organised to showcase three up-and-coming Maltese bands.

The night kicked off with Ninu & Amber. Ninu walks on stage casually swinging a guitar and shy little Amber trots behind him for their first ever public performance. As soon as the first song kicked off, we realised that Amber can really belt out a tune from her petite little frame. Despite some minor technical hiccups, the band deliver a crowd-pleasing set of contemporary indie-alternative covers. Five Years’ Time by Noah & the Whale and New Romantic by Laura Marling were my personal favourites, each given an original twist by Amber’s signature voice and Ninu’s guitar. Amber’s broken voice is very reminiscent of front line acts such as Florence & the Machine, the Yeah Yeah Yeahs and Bat for Lashes. All this was very pleasantly welcomed by the crowd, if slightly overshadowed with cheers from an enthusiastic group of 50-somethings, probably composed of Ninu & Amber’s relatives and their entourages. All in all, two thumbs up considering it was their first, and what promises not to be their last, performance.

Next up were Vinnie Vintage, a band that simply oozes character. 4 lovable boys, brought together since school sharing one common love: making music. With a loyal fan base and a few successful performances behind them, Vinnie Vintage delivered what the crowd came for. Playing originals such as Cool Shoes, Barmen are Detectives and Sea to the Salt, the Vinnie Vintage came to what seemed an abrupt end, leaving the crowd baying for encores. The Vinnies came back with a wonderfully energetic performance of White Stripes’ Fell in Love with a Girl.

The final act of the night was Dolls for Idols. Already on the scene for a few months, I had heard a lot about this band, but never made it to their gigs. Looking around I see they already have a loyal fan base. Four lanky Jim Morrison lookalikes trudge onto the stage. Within a few minutes they are shouting for another microphone. That’s when I knew these guys have attitude. Within seconds of the first tune, I’ve joined the moshing crowd at the front – these guys rock! Playing originals such as Billy Bangs and Through the city at night, their set came to end, giving my legs a well-deserved, brief, rest, before handing the baton over to The Wizard for an amazing DJ set featuring a cross over between alternative, electronic and nu-rave hits to leave us all dancing till our legs could dance no more.

So forget America’s Got Talent and its various spin offs: last Wednesday was definitely Malta’s Got Talent’s turn. As yet undiscovered by record labels and unknown to most marketing people, these three acts definitely have what it takes to be up there. Remember – you read about them first here!

Follow Vinnie Vintage and Dolls for Idols on MySpace.