You are here: Home / Of Traffic Wardens, Parkers & Police 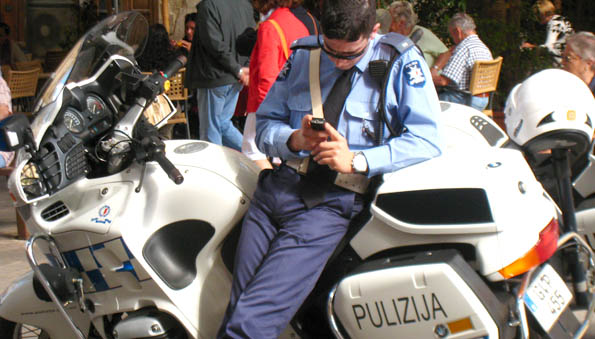 If only they were all less eagle eyed!

There was a time in Malta, up to the early 90s, when the islands had one set of traffic lights, few roundabouts, and no drink-driving limits. These were also the heady days when all roads were more pothole than Tarmac. If you’d been used to driving abroad, driving in Malta was not only the same adventure it is today, but had an even more reckless, gung-ho feel about it.

In those days, I remember seeing cars going the wrong way round a roundabout (if turning right, why go all the way round?), reversing around roundabouts, and more frequently than now, stopping mid roundabout to drop off passengers.

I read recently that in Italy, many German motorists, once over the Alpine border, drive far more casually and carelessly than they would back home, simply because they feel traffic laws aren’t enforced so well in Italy. Well, in Malta today, you can expect quite rigorous traffic control and monitoring, so don’t be fooled just because you see some natives still meandering around the road breaking laws.

Here, we do a round up of the traffic control methods to keep your beady eye out for, to avoid mishap. First some useful links:

The local warden service has just celebrated its 10th birthday. When it first started, most people were enthusiastic about its introduction, and looking forward to improvements in not only the lackadaisical driving and parking but also a tidier Malta as they had litter patrol duties too.

The wardens have three responsibilities in the area of enforcement: to educate, to deter and, finally, to enforce. The system is operated by a private management company which also runs the growing speed camera network. There have been some low points in the service’s history (with the murder of a female warden in Gozo in 2001 while she was on duty), and there are always mumblings around the heavy handedness of their ticket issuing, which some allege is to fill quotas.

On the whole, wardens are part of a modern European state and the system is needed here. Motorists worldwide hate wardens, let’s face it. I do have my reservations sometimes about their ability to direct traffic clearly. Very often when they are posted to road works, I’ve seen them haphazardly directing traffic (safely?) around the obstacle. I often think timed, traffic lights would do a better job.

Watching out for them...Mostly, you’ll need to worry about them when you park. Certain areas like Sliema, Valletta, San Gwann, St Julian’s, Naxxar and Mosta (the key urban areas really) have heavy warden presence and they regularly check parking time limits (get a disc from local council offices). Beware the numerous local regulations – parking limits, residents’-only parking spaces (marked blue in Valletta), and odd notices like the one in my alley saying ‘park front bumper to kerb’. My neighbour was issued a ticket for having reversed into the space!

Be aware also that a lot of restrictions (disabled-only spaces) are painted on the Tarmac and so fade off in the sun. I found my car towed away once after I’d parked at night in a space that had from what I could see no indication it was restricted. I could barely see the lettering in daylight either.

Most large roundabouts are patrolled by hawk-eyed traffic wardens or police, particularly during rush hour – hence the queues you find approaching them. At these times, make sure you indicate, and obey roundabout rules as you may well get pulled over; if for nothing else, a spot check of your tax disc.

Speed cameras: A short note on these as they are sprouting like mushrooms, but we’re almost learning to live with them. The main worry about them is the varying speed limits they’re ‘enforcing’. Some main bypasses and country roads have limits of 60Km while others are 70km. You can easily forget which camera watches which limit and get caught out. The fine is Eur 70.

These are a rarer breed than wardens, but often stay together like birds of a feather. They lurk on the side of roundabouts or watch wide country roads (Attard-Mdina) to make sure no one goes across the no-overtaking double white lines. You may be behind a crawling veggie lorry, but don’t be tempted to overtake as with your luck, it’ll be the day a policeman is on duty there.

Traffic police do have a habit of sneaking up behind you, if you aren’t using your rear view mirror much, that is. They mostly just want to get past, light flashing, but as they do so they will be eyeing your vehicle up for any infringement of the law. Generally, they pull over ancient vehicles and lorries carrying heavy loads (stone, rubble etc). If you have an overseas number plate, they will almost certainly pull you over to check whether you have either the ‘tourist’ permit to drive it in Malta or whether you’ve paid the vehicle registration taxes on import. They are very prickly and stiff about this. So have paperwork to hand.

Traffic police have a certain air about them with their helmets, black boots and massive motorbikes. While seeming intimidating, I’ve found them generally reasonable (bar on one occasion) and amazingly helpful when you’re stuck out in floods on wet, windy nights! One arrived like a white knight when my car died in Qormi near Pavi Supermarket.

An odd breed this; and one that may well be extinct soon. In a few years, I am sure ‘pay-and-display’ ticketing systems will replace them with one single guy who does spot checks on lots of car parks. They must be licensed to do their job, though they never sport badges. They vaguely wave you into a space in areas that can look like proper car parks (Mdina bastion parking, Golden Bay, Valletta’s ditch) or just be rough off-the-road spots. They can be amusing (Golden Bay parker is a great guy), or just odd-ball types lurking around (old men, who’ve done the job for years in all weathers like the one I used to see at Hagar Qim).

You just need to tip them something – anything from 50c upwards according to how long you’ve parked, your generosity and whether you’ve chatted with them a bit and so on. Keep spare change handy as you won’t get change back. Do pay them, even if you think the system balmy and antiquated. It seems to be a livelihood all year round for some! A relic of old Malta…