You are here: Home / My Birgu 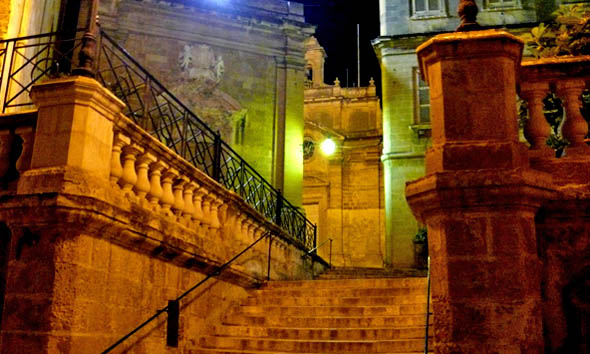 Of shadows and light; evoking past and present

Last Friday, I was enjoying a rare evening of solitude. My wife was abroad at a conference, my daughter was out with friends and I had just dropped off my son in Sliema for his weekly Boy Scouts reunion. That gave me a solid three hours of being on my own and the dilemma of what to do with the time.

I settled on visiting Vittoriosa, the town where my paternal grandmother used to live and where I can recollect countless moments of joy and nostalgia from my childhood. Armed with my trusted Leica, I drove there and parked my car behind the Maritime Museum.

It was already dark when I got there, but the place was well lit. It was early enough for some shops to still be open and for some, but not too many, people to still be doing their rounds.

I walked up the steps to the left of St Lawrence’s church, past the chapels and the church buildings and found myself at the corner of the square. It was then that 35-year-old memories started to flood my thoughts. I was back in the mid 1970s; a ten year old visiting my Nanna Karmena and all the ghosts from that past suddenly swam into my conscience.

Very few of the places and shops I remembered survive today, although the buildings are still the same. In one corner I saw the shop that used to house Sophie’s Bazaar, a small establishment which virtually stocked everything you cared to buy. Opposite Sophie’s an old door stands guard over where Pawlu’s first butcher shop once stood. Pawlu, my father’s cousin, eventually expanded the business and moved to a bigger shop, now a wine bar, at the other end of the square. Mifsud’s Garage, the chauffeur driven service Ta’ Billurasu still advertises its services but the shop itself now sells household goods.

Moving on, I climbed the hill towards St Dominic’s. Many of the little shops of my childhood are now wine-bars, and Sur Tonin’s old Pharmacy has been redone. The Inquisitor’s Palace, abandoned, dark and scary in my childhood is now refurbished and a fully functional museum. My favourite pasturi shop, where little clay figurines of saints and religious figure were occasionally purchased, is now a confectionery.

I climbed down again, through the side streets. I walked past a garage: a third of a century ago it was Nini’s grocery, where I would be sent on minor errands to buy 50gms of ham, a bottle of milk, a smear of kunserva on some wax-paper. I walked down the hill to the Maritime Museum. Zahra’s barber shop used to be there, and, at the foot of the hill, the Rose, Shamrock, Thistle Bar, overflowing with British sailors. All are gone now and only the ghosts in my mind remain.

I walked to the seafront, past my late Nanna’s flat. The yachts have replaced the British Navy and instead of the foreign sailors Ix-Xatt now attracts other outsiders: Maltese who barely knew the place existed before it became fashionable.

Vittoriosa has changed, mostly for the better. It is now more organised, cleaner, beautiful, and prouder perhaps. It is better known and popular. Formerly part of the impenetrable south, it is now a landmark. This is in no small way due to its people, proud of their little city as they are.

As I walked the little streets, with their flower pots and their period light fittings, I could not but reminisce of when it was cruder but more real. And somehow, I prefer that blemished past to the present. Strange thing, nostalgia.