Easter week in Malta marks the opening of doors, the hinging back of shutters, the polishing of decking and patios and the erecting of sunshades. Even if the weather is still fickle, this week heralds the summer season to come. Eateries from humble kiosks along the seafronts to à la carte restaurants are busy devising the new season’s fare, tantilising our summer taste buds and senses with an early spot of al fresco dining as licks of fresh paint dry and new restaurant furniture is set out.

Quadro Restaurant, the Westin Dragonara Resort’s fine diner overlooking St Julian’s Bay has been busy well ahead of the season working on newly-designed menu for some weeks – both its à la carte and daily table d’hôte versions. We were invited along with fellow local food and scene bloggers to savour and critique some of its new seasonal dishes as a precursor to what this understated, refined place has to offer diners in SS14. Having had a look at the menus online, I can say that our four-hour marathon meal barely scratched the surface of the wealth of options on offer, and all of us rolled out having feasted like royalty.

Quadro, inside or out, you’re never far from the sea.

It’s easy to overlook hotel restaurants as so many newcomer eateries appear on the scene each week in Malta it seems. The Westin’s Quadro Restaurant though has held its own, quietly finding and consolidating its niche as a refined, but not starchy place to go for more those more special dining occasions. While we dined inside for our preview night, now is the time to think of Quadro big time; its outside terrace offers even better pole position views over the bay. The Westin’s other eatery, the less formal pizza-pasta counterpart to Quadro is Palio’s, which fulfills its role well a one of the nation’s favourites for families and informal Sunday lunches. Both share a standalone location away from the main hotel, and right on the stunning seaboard location of St Julian’s Bay.

Quadro though is not for those who seek a routinely comfortably or ‘non-thinking’ person’s menu. As we found out, the chefs behind the scenes are keen to rock the boat, though also to ensure clientele are duly satisfied with the fare. We’re talking showiness of plates for sure, but not to the detriment of seriously good food. 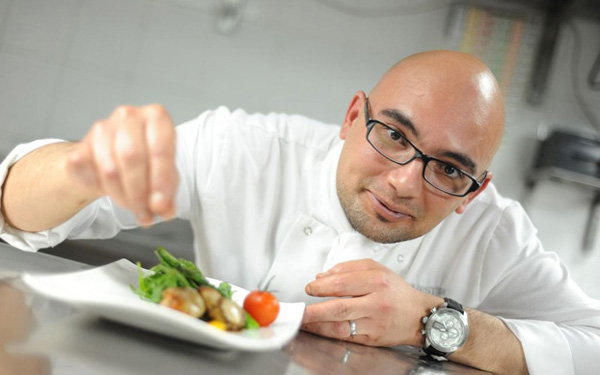 Executive Sous Chef Jonathan Vella, who we urged to come front of house at the close of our meal to chat over his new menu choices, bears more than a passing resemblance to Heston Blumenthal. Chef Jonathan would certainly give Heston a run for his money. It’s clear to all that this is man passionate about what he does and one keen to surprise, and provoke the curiosity of Quadro’s clientele. We drilled him a bit about some of the surprises we encountered.

The smoking Kilner jar salad of grilled asparagus, dried blueberry, macadamia nuts and (sous-vide) eggs was to my mind verging on the Blumethal school. That, and the fizz-popping little balls in the final chocolate ensemble (think Roald Dahl’s Wonka delights crossed with 1970s’ sherberts) were the two elements that gave us food for debate, not just thought. The ‘deconstructed apple pie’ was another ingenious idea and talking point as were the delightful entrées served in individual, mock-up sardine cans. The mains of beef filet and catch of the day sea bream were cooked to their most subtle and to perfection. As you’d expect from a restaurant so close to the sea, fish is given its due on the menu.

Reading the menu now, I can’t help realise how deceptively simple it seemed at first glance, only to remember how inventive and surprising it turned out to be. Looking at the vast range of options on both of Quadro’s menus – the à la carte and table d’hôte, I know now that they are also in the same league as our night out as invitees. So, if you’re game for trying a truly inventive dining experience this spring into summer, put Quadro with Chef Jonathan and his team on your list of must-dine-at places to go.

There’s a special Easter Menu too.