Out of sight, out of mind, out of shape, Malta’s industrial urban decay has its stories to tell. Here, Stephanie Calleja mulls over the state of her neighbourhood – Mrieħel.

Whenever my stance on something runs counter to my mother’s, it always boils down to the same question: “Have you forgotten your roots?”.  She bangs this out in the middle of an argument, and I can never offer a suitable reply.

I’ve not spent much time at home lately. I’d rather gawk at the heaps of winter leaves blanketing cars in frosty Rome, be dwarfed by the colossal basilicas, or better still shamelessly slurp on mouthwatering bucatini against the backdrop of the Colosseum. My hometown is off the Richter scale of palour compared to these sights; then again, it would be selfish of me to dismiss the town that nurtured my Wanderlust.

Are you familiar with that feeling of having passed through uninspiring urban sprawl many times on your way to work without bothering to make a virtue out of that necessity? That’s how I feel about Imrieħel. Its jibby-jabby landscape incurs visions of architects with jellylike hands frantically erasing and redrawing plans of the next ‘state-of-the-art’ building – only to have their effort drowned out by the noise of sprouting cranes. Nonetheless, it’s what stops sun rays from piercing through my bedroom window every morning – so for that, I am deeply grateful.

Drumming up the will to break out of my usual sedentary routine, I put on my tourist hat, latch my camera round my neck and set out to discover and capture the slice of land that is practically my back yard. To my dismay, apart from the aqueducts, there was really nothing much to see of interest. Except factories. The whole estate is littered with those.

Nestling right in between two of the highest-grossing warehouses on the island is a spot of urban decay that seems to have been abandoned for so long that nature is starting to reclaim it. The desolate building, three floors high and many a thousand square feet wide, is marked out by broken windows, unwanted rubbish and casual graffiti. Its post-apocalyptic interiors, which I could have sworn to have seen in the opening scene of ‘The Divide’, are not exactly inviting either.

The site, property of government-owned company Malta Industrial Parks, was closed off to the public in 2008 following the collapse of part of its roof. This in turn exposed huge slabs of carcinogenic asbestos that, according to respiratory disease experts, pose a risk to people who are in close proximity to the dangerous substance. Despite the doorless rooms and broken windows, no one would get a lethal whiff of the dangerous substance.

Formerly known as Malta Rubber and later in its post-specialisation phase as Dowty-O-Rings, the building housed a company that set shop in Malta in 1961 with the aim of supplying the automobile industry.  Dowty based its research and manufacturing facilities in Mrieħel for more than three decades.

In its heyday, the company employed 600 people who produced a billion O-rings every year. When the Trelleborg Group acquired the business in 2004, the ever-growing manufacturing plant moved to vast premises in Ħal Far, where it still operates today.

“If all the O-rings produced in Malta were lined up one next to the other, they would reach to the moon and back; that’s 750,000 kilometres”, Managing Director Martin Hignett joked on the company’s 50th anniversary. Clearly, the man is the architect of his own future. But the company’s old premises were not part of that equation. In many people’s eyes, the value of that building was way past its expiration date.

Urban decay is usually the by-product of a combination of factors, namely poor planning decisions, the routing of arterial roads, the suburbanisation of peripheral land as well as depopulation. This scene in particular does not, however, pay testament to the phenomenon of de-industrialisation, as developers still seem to be fighting over the few remaining specks of fields in the vicinity. Cranes will tower over you whichever road you take, whether you’re working your way into the place or finding your way out of it. Jackhammers recklessly mark the territory. 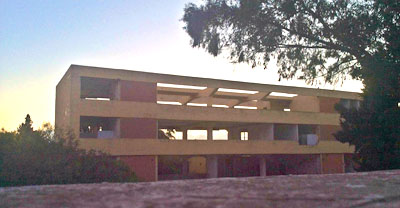 But is there really a way out of this? Malta is nowadays dubbed as ‘an overbuilt concrete jungle’ not only by its dense population but also by tourists who only manage to see a fragment of the Maltese landscape. At a time when brain drain is a major concern for the local community, abandonment issues won’t do anybody any favours. MEPA’s highly questionable practices don’t help, either.

And so, with barely any memorable shots to remember this solo adventure by, other than the odd cat snap here and there, I follow the wayward breeze back home, where the clock fervently ticks on and the thought of permanently moving to a new neighbourhood fill my mind.

Stephanie Calleja is an MA student of English and the Media at the University of Malta. She researched and wrote this article for an assignment on blogging. You can find her on Facebook.