You are here: Home / Events & Festas / The Malta village festa

In 1965, the anthropologist Jeremy Boissevain wrote a sublime book called “Saints and Fireworks“.  Its equally telling subtitle: “Religion and Politics in Rural Malta” is about the intertwining of popular and political culture and the intricate methods of Maltese social networking.  What Boissevain wrote in the sixties about clientelism, patronage and political polarisation has proved to be remarkably resistant to the passage of time. If you want to experience Maltese popular culture head-on, there’s probably no better place to start than the annual village festa.

Today is the feast of San Nikola, the patron saint of our village, Siggiewi – as good as any other excuse for some Maltese cultural sign-posting.  Here are 10 leitmotifs that will probably resonate with most Maltese village festas:

1. The Church, the Saint and their Keepers.  You’d think that they’re one and the same thing, since most churches are dedicated to a saint, the Holy Mary or Jesus and are patronised by the masses.  But there’s the building and there’s the statue that is the focus of attention for the entire festa week – and then there are the armies of men and women who toil around the year to deliver the goods.  The latter include the steeplejacks who risk life and limb to set up the electric candy lights around the dome and the men at the Kazin tal-Armar stationed in our alley who create incredible works of art or traffic hazards, depending on your sense of humour during festa week.   There are also the elect few men who vie for the honour of carrying the statue round the village on Sunday – a task requiring brawn and religious fortitude in equal measure.  The church remains a visually stunning backdrop to this activity – in our case, an electroland of baroque pomp and deep blood-red festoons.

2.  The Clergy.  Priests and nuns are out in full force in festa week.  The migration from the pulpit to the street means that a member of the clergy must become a man of the people;  affiliated with the organising institution but also in tune with the festive flock.   Priests serve as MCs, herders, organisers, petters of heads and incense-wavers. Nuns generally follow the brass band march in the evening, but are never seen in the Sunday morning marches.

3.  Bells, Whistles and Confetti.  There is nothing subtle about a Maltese festa.  The village bell-ringers are inclined to put in a 24/7 shift on festa weekend.  Even if you live close to the village centre, like we do, you need to negotiate a new relationship with your tolerance to noise levels.   There is a bass drum thumping though the late afternoon.    Whistles and screams.  Your child is as likely to be chewing confetti as to  be screeching at the belfry.

4.  Fireworks.   The assault to the senses continues with big bangs during the day and coloured displays at night.  There are both aerial and ground fire displays.   Expect catherine-wheels on Saturday night, musketterija throughout the weekend and petards when you least expect them.  If you have young kids in tow or suffer from tinnitus, then the Maltese festa will take some negotiation.  At times, this is the closest equivalent to a My Bloody Valentine gig. 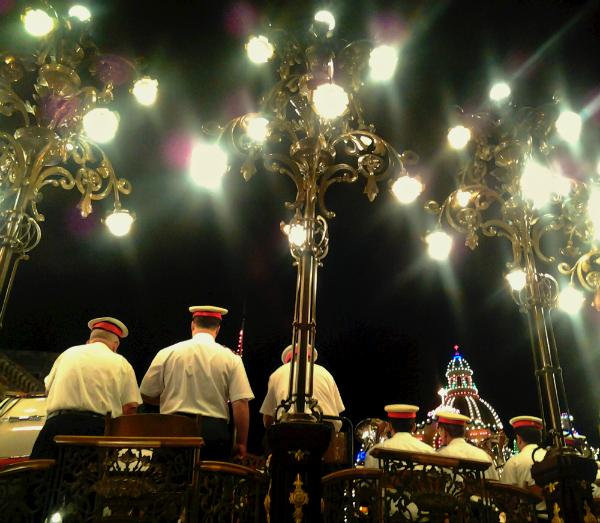 5.  Brass Bands and Processions.  Most villages have two resident brass bands.  Siggiewi for instance has the Banda San Nikola dating back to 1883 and the Siggiewi Festival Brass Band, founded in 1986.  In some villages, the brass bands represent one of the two political parties, the PL or the PN.  Supporters would then tend to wear red or blue t-shirts during the procession.  The more affluent of villages will also invite brass bands from other villages to play during the week. Our square, for instance, has two band stands for the rival band clubs.  On Saturday night, both bands were playing simultaneously, almost within ear-shot of each other.   The fact is that without a brass band, you cannot really have a procession or a proper march – and tradition dictates that in whatever state you are, you follow the brass band if it’s on the march.  It’s a great opportunity to yell to neighbours, stop and snack, chat up a tourist or show off the latest resident of the buggy.

6.  Street Food and Kiosks.  Forget your healthy lifestyle.  You will only find carbohydrates and cholesterol-inducing finger-food at the kiosks.  The festa is the natural home to the hotdog, the hamburger with limp chips and door-stop ftiras wrapped in clingfilm.  Confectionery’s most famous representative at the festa is the local nougat, but you are never far away from granitas, dripping ice-creams with chocolate flakes and pink doughnuts.

7.  Politics, Power and Social Capital.  On the fringes of the festa, the well-heeled and the powerful mingle with those they are supposed to represent.  The festa is a showcase for the passeggiata of local MPs, councillors and their families. The ‘haves’ are distinguishable by the size of their entourages, but also by the display of wealth – so watch out for knuckle-duster jewelry and the odd Merc parked on a yellow line.  Like the clergy, the powerful have to visibly embrace the festa:  during festa week, there are speeches to be made and tombola parties and masses to attend ‘with the family’.

8. Alcohol & Street Parties.  The two are intertwined.  The Sunday morning march, from around 10.30 to 16.00 hrs is an excuse for a bit of laddishness and debauchery.  You may be unlucky to witness the occasional street-fight, often fuelled by political piques or band rivalries – but in most villages, good humour reigns supreme. Expect to be showered in beer, to be close to arm-pits, handbags, balloons and beer-bellies.  This is our urban equivalent of a rave party.  If you drink enough, you will understand there is much communion in sweat and ice-cold lager.

9. People-watching.  As in Fellini’s ‘Roma’, the festa is about human plumage.  In the twinkling of an eye, you go from the lace and yellow of vestments to bulging lycra and spandex.  Families bond, young Turks show off their tattoos and eye up the cleavages.   Late at night, the pjazza is a catwalk of fashion style challenges and hem-pullings.

10 . We are Empire.  Perhaps the village festa is our middle finger to our colonial past.  It survives despite our ongoing uncertainty about our national identity and our restless relationships with EU institutions.   It remains alive and kicking because its traditions are vested in familiarity, in family networks and island world-views.  If you are Maltese and live away from the islands, you will always have to negotiate the odd day when for some reason, you ache for the assault to the senses that is the village festa.