You are here: Home / Film & Photography / The Devil’s Double: an extra’s view

When The Devil’s Double was filmed in Malta last year, David Carabott was hired as an extra to play an Iraqi soldier. In fact, David is a serial ‘extra’. He has jobbed in several productions shot in the Maltese Islands over recent years including: Gladiator; Troy; Da Vinci Code; Carabinieri 7; Agora; Jaws 1916; Savage Shore; Il Commissario Rex; and this year too, World War Z, produced by Brad Pitt. Here, he takes us through the pros and pitfalls of brushing shoulders with the big names, behind and in front of camera on The Devil’s Double. 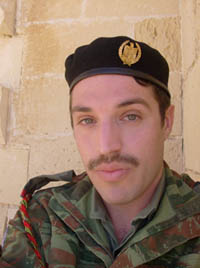 David as an Iraqi soldier

Whenever I hear that a foreign film production has come to our shores, I try all means to make it to the casting. In 2010, it was The Devil’s Double’s turn. It was almost entirely shot in the Maltese islands, except for the desert shoot, which was taken in Jordan.

From day one, the extras were advised not to approach the film director, Lee Tamahori, apparently because he’s renowned as not being too easy to deal with. One day after lunch, while the extras were walking back towards the set, I tested the crowd marshals’ instructions and went close to Tamahori, asking for a picture. He firmly replied, “No way!”

A friend of mine, who was working at the hotel where the film crew was staying, shared some impressions. The film crew were overly authoritative and quite pretentious at times. Lee Tamahori seemed a very quiet and shy person to talk to. The director, on his arrival, told the hotel staff: “My next job will be producing a film, so, if I need extras, I’ll be sure to let you know”.

‘Background action’
On set, one of the extras who is an avid film enthusiast told me that Lee Tamahori is the son of a Māori. Another interesting fact is that the director started his career working his way up from the bottom as a boom operator, then as a photographer, before gaining a foothold on the ladder in the film industry.

Tamahori is notoriously regarded by several film critics as the director with a bizarre behaviour who possesses “two personalities”. A murky affair in 2006 in a Santa Monica Boulevard and a resulting court case seem to surface when one Googles him. Nevertheless, on set, observing the film maker was really inspiring. He is one of the most creative film directors I have ever seen during my “extra” experiences. Tamahori is so hands-on, and his energy is outstanding and he really managed to pull all the crew together.

‘Quiet Please’
I got to know Latif Yahia, the real life body double of Saddam Hussein’s son Uday whose life was turned into a Hollywood film. When Latif returned to Malta, he brought me a signed copy of his autobiographical novel. Latif and I talked about the issue of how his birth land Iraq is portrayed in the media which gives a picture of an exaggerated hell on earth. Latif is very proud of where he comes from and of his origins. I enjoyed listening to him when he spoke to me about Iraq, which in ancient times was known as Mesopotamia, with its magnificent capital, Babylon. Latif Yahia emphasised that Iraq was once the cradle of civilisation. 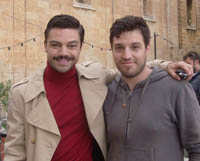 Why is Dominic Cooper, who plays both Uday Hussein and Latif Yahia in the film famous? He rose to fame playing the character, Sky, in the film version of Mamma Mia! The Greenwich born actor, on set, was so down to earth, and his pleasant personality was prominent. What struck me most in Dominic Cooper was that stereotypical British sense of humour. Many times, between shots, he played sarcastic and funny jokes with his fellow actors and the film crew. Once, I asked Dominic Cooper for an autograph, and he ironically replied, “I’m not humble all the time but I’m not conceited, either.” Even though he was undoubtedly the star of the film, Cooper was always approachable.

‘Cut’
Having a male actor being portrayed as a sex object, even though male sex symbolism has been around since the beginning of the 20th century during the silent film era is not the norm. Generally, Hollywood’s films are characterised by sexual images of appealing women. Though, Dominic Cooper is somehow subverting this trend.

On several occasions I hung out with Cooper’s younger brother James and some other crew. Whenever we met Dominic Cooper, girls chased him wherever he went. Cooper will surely remember Malta for its vivid nightlife, and for the sun and the sea.

‘Coming Soon’
Working as an extra broadens the mind, in the sense that you meet people of different cultures, you are outside and not glued to a laptop, and it may open new doors….. Hence, I cannot wait until I get the next call: “Hello David, are you available to work as an extra on xxxxx film”? (Yes please!)

The author wishes to thank Jean Pierre Borg, Nigel Micallef and Keith Preble for helping with queries and proof reading.
Photos: courtesy of David Carabott. Top photo was taken on set in Pembroke.