You are here: Home / Nightlife / Paceville: Malta’s night life hotspot is not for everyone 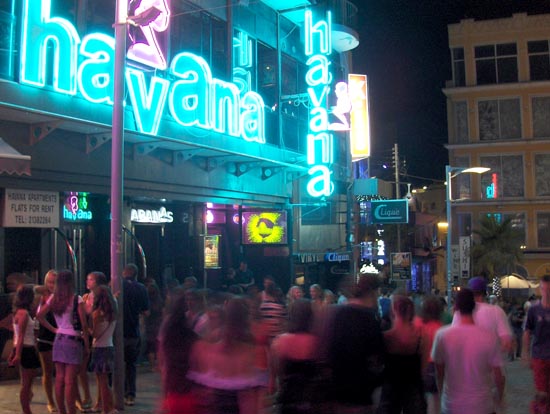 Is there anyone over 16 here?

Love it, hate it, wait eagerly to go there weekends, or wince at the thought of it, all Malta has a reaction to Paceville (pronounced ‘parch-i-ville’). Routinely billed as the heart of Malta’s nightlife, it’s either the place to be seen or a place to avoid, depending largely on your age and taste in night life. It has everything from clubs to gentlemen’s clubs and a casino, and an atmosphere ranging from tacky to cool. The four ‘s’ words are probably what most people of certain ages go looking for or chance across if they aren’t.

In these last weeks of peak summer 2011, we reflect on what this season has added to Paceville’s reputation. The past week alone has seen a flurry of news reports ranging from those detailing the latest incidents of violent behaviour on Paceville’s streets to businesses’ calls for a new structure – a ‘Paceville Agency‘ – to deal with the areas’ ills.

Somewhat in the minority are other voices complaining Malta is painting too black a picture of its top nightlife area.   Not good for tourism, they say.  I feel they do have a point there as many businesses in Paceville work hard to run a tight ship.  But most of us here in Malta are quite aware there’s a gaping void between glossy brochure speak and the reality of Paceville.

The area has enjoyed a meteroic rise to infamy this summer. Though some commentators say it was actually worse 30 years ago.  It’s a shame because there are good many excellent restaurants tucked away down its side streets which could attract more business. It has a Blue Flag beach and picturesque bays on its fringes too. But I know a lot of locals who simply won’t go near the area from May to September.

Older people (and we’re talking perhaps of 30 plus only here) say it’s full of teens.  Even by age 21, some locals have had it with Paceville (locally known as ‘PV’).  Here’s what Charlie (21) says about why people go to PV:

2. to meet the same people over and over again. No interesting conversations take place there.. just useless, drunken chat.

3. to pull anything of the opposite sex,

4. because ‘there is nothing better to do’.

5. the weekend shows up and people simply feel like clubbing. There are still many who love the place because of that.

(Afterthought): It’s still very cheap to go out (especially if you’re a girl). There are no entrance fees to many of the clubs. It’s drawing ever younger people in: 14 year-olds go there supposedly accompanying their elder siblings.. and end up getting wasted themselves. By the time you get to 21, you’ve done it all and want to move on. Also, if you’ve done any serious travel yourself, you know that there is life beyond Paceville.

Verdict? Go there understanding what Paceville is, and you won’t be disappointed.

What and where is Paceville?

It’s a compact, urban peninsula between St George’s Bay and Spinola Bay and facing the inland residential area of Swieqi. It also has a large number of five-star hotels on its fringes. The St George’s Bay (newly-made) beach is considered Paceville’s local beach. Paceville life centres on Dragonara Road, Wilga Street, St. Georges Road and St. Rita Steps where clubs, bars, restaurants, snack outlets, discos and more spill out into paved streets. It isn’t that attractive a place by day, but at night, it’s like Malta’s mini version of London’s Soho, Leicester Square and Piccadilly Circus – loud, brash and in your face.

How to get there or more importantly, back:

Arriva runs a lot of night buses from St Julian’s.  Click here for the list of routes and times.  There’s some park and ride services too, which make life a bit easier if you’re driving.