You are here: Home / Events & Festas / Easter in Malta: a quick guide to Holy Week 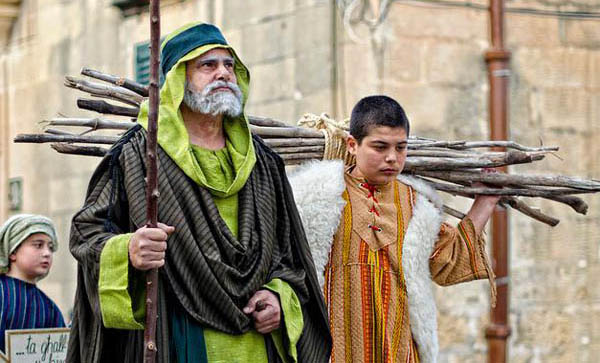 Each year, more parishes stage some outdoor public event to mark Holy Week and the numbers of willing volunteers grow. Some parishes have dedicated drama groups founded specifically to organise and stage pageants during Holy Week; the Għaqda Drammatika Għajnsielem (Għajnsielem Drama Group) in Gozo is just one that produces an impressively well-supported and organised event. You’ll find a taster of its efforts in this video from a past year and a round-up of all Holy Week activities in the locality here: 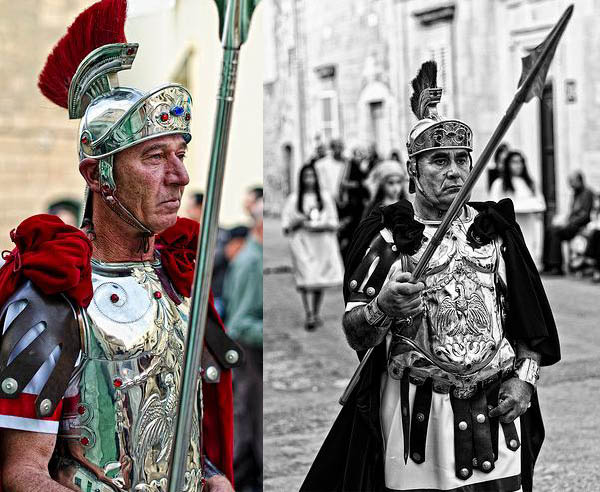 Officially, Easter week starts on Palm Sunday, 20th March, 2015 and runs to Easter Sunday a week later on 27th March.  But anyone living in Malta knows that things hot up the week before; the Friday a week before Good Friday is called id-Duluri, or the feast of our Lady Of Sorrow, which sees crowds slowly and mournfully follow the statue of ‘Our Lady’ in solemn procession. Valletta has the most notable id-Duluri procession.

The key days of Easter are otherwise the regular ones, but note that Malta doesn’t have a public holiday on Easter Monday. 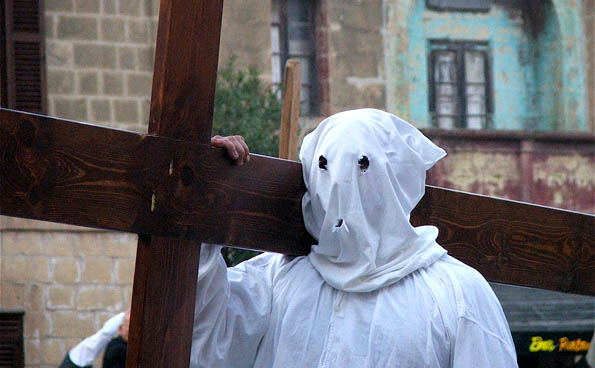 This day commemorates the Last Supper and is the start of the mourning. You’ll find lots of parishes create representations of the Last Supper and/or the entire Easter story in model form, rather like Christmas crib displays. It’s a tradition on this day for people to visit them as they do their tour round the islands of ‘Altars of Repose’; ideally in seven different churches or chapels. These Altars are elaborately dressed up for the occasion with white flowers – the Mdina Cathedral altar is particularly bedecked. Some parishes will stop their bells on Holy Thursday to replace the regular ringing with a Ċuqqlajta, a clattering wooden ‘gong’ which sounds like a giant football rattle. Zebbug and Siggiewi tend to do this, as do other more tradition-loving or rural parishes. 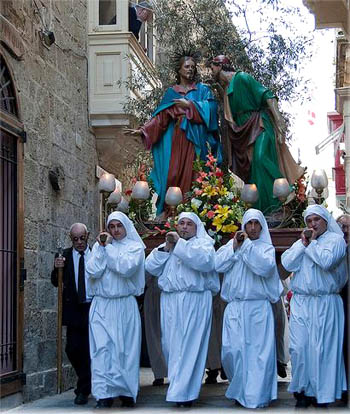 Girgenti Torchlit Procession on Maundy Thursday – this special event starts off in Siggiewi village square at 8pm and leads on by torchlight out of the village up to Girgenti hill to the Laferla Cross. The last part of the route is a rough steep path along which you’ll find the Stations of the Cross depicted and often scout troops and youth groups enacting tableaux. You jostle in the half dark, miss your footing at times and find people surging downhill contraflow, with baby buggies and more! It certainly is an ‘event’!

Good Friday is the official mourning day so no mass is held though people may go to church to kiss the cross at the time Christ died (3pm) and to say personal prayers. The day is bell-free and silent. But it is the big day of processions. And we mean big. Malta has some spectacular, lengthy and large processions involving casts of hundreds. Some have become main tourist attractions in recent years, with public address systems broadcasting a commentary in several languages. Zebbug in Malta is renowned for its extravagant procession. As is Xaghra in Gozo. And you’ll find more about the Għajnsielem Drama Group’s production here.

The main ones see people dressed as Romans, Jewish priests, disciples, other Biblical figures and country folk like shepherds. You’ll also see people dressed in white cloaks and pointed hoods, covered from head to toe – these are the faceless penitents and are often seen carrying crosses or dragging chains on their feet. The procession usually files out of the church interspersed with men bearing statues and scenes depicting the ‘Passion of Our Lord’. Plan to get to your chosen procession early (they start mid-late afternoon) for a pole position view and to stay late if you want to see it all! Processions take place in:

This is a day in total contrast to all that has gone before in Holy Week. A day of celebration of the Risen Christ. The churches are open and special mass takes place – with bells resumed! It’s a day then for family as people flock home to their lavish lunches and, as in much of Christian Europe, the giving of chocolate eggs. Malta has its special Easter cakes – Figolli – which feature all Easter but are often taken as gifts on this day.

The most notable spectacle on Easter Sunday is the celebration of the Risen Christ (L-Irxoxt) in Birgu (Vittoriosa). This sees a group of men (hopefully fit and strong!) make a mad dash uphill bearing what looks like a very heavy statue of the Ascending Christ. It’s a popular event in Malta and draws the tourists too. But do stand well back when the statue rushes up hill to the Square as I saw someone lean forward to take a photo and get nasty surprise, and a near miss from the bearers’ pole. They’re fit guys and the uphill spurt is far speedier than you’d think possible under a tonne weight of statue!