You are here: Home / Property / The only way is up? Malta property goes high rise

Malta is urban despite its relatively unpopulated north. We live concentrated in an arc around Valletta. We often hear ourselves passing comments like “place X is too far away from nightlife or the hub of society to live in or drive to” when in fact it lies a mere 15 minutes away from Sliema or St Julian’s. Since that’s our mindset, and Malta’s planning authority (MEPA) is supposed to be saving what little virgin territory we have, most new development is taking place in the already built-up areas and it’s going high rise. Here, architecture student Sergei Mikhailenko discusses the reasons why the only way for Malta property is up, but also asks if Malta is tackling high rise the right way. 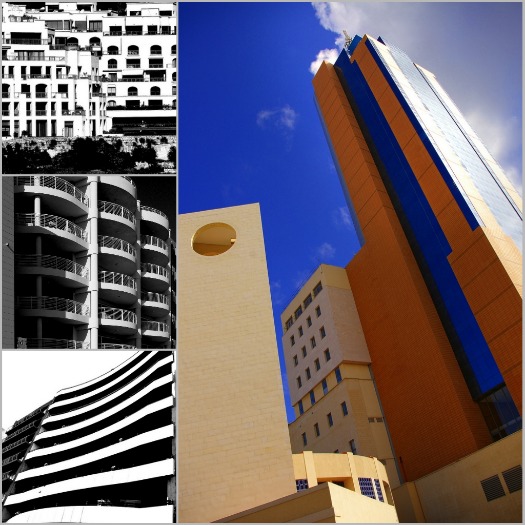 Round, square, smooth: Malta's property, every which shape but always high

The Impact of the High Rise
A solution to the problem of space was developed in the US during the C20th century – the skyscraper. However, it brought its own set of problems – cultural, economic and environmental – such as social stratification, increased traffic, inadequate street layouts, decreased quality of light, wind and vegetation, and the ‘Urban Heat Island’ effect.

In Malta, nostalgia and respect for historical buildings play important roles in the development of the country. In fact, many areas on the island are classified as Urban Conservation Areas where new development has to respect the existing urban fabric.

Many of these areas were built on an old model of city. Streets were planned for pedestrians and horses making them narrow and organic and would wind around the highest building of the area – the baroque church.

Old vs new planning is just one issue. There is also a key cultural and economic issue inherent with high-rise development; that of social stratification. High-rises are considered a measure of wealth and power; the higher you go the wealthier and powerful you are (take for instance the towers of rival merchant families in medieval San Gimignano in Tuscany, Italy). We can all too easily end up with ghetto-isation: a situation in which wealthy people live in high-rise designated areas while the lower economic quartile of the population ends up in areas that could potentially turn into slums.

Apart from the cultural, social and economic issues, there are the technical and environmental ones too. It is important to design high-rises bearing in mind the safety of inhabitants, the climate in Malta (sun, wind and rain patterns), the geological and seismic situation, and many other details which affect a given site and the erection of a building which is up to standard.

Do we need more housing at all though?
The Maltese population increased during the past years so more people have to be accommodated within a limited area. For this reason, MEPA (Malta Environment and Planning Authority) published the Structure Plan in which it promotes the increase in urban densities of already built-up areas. This will entail building higher buildings.

According to a Eurostat report, the Maltese population is an ageing one; the fertility rate is low and more people are living to an older age. But it is predicted that the population will grow by 4.5% until the year 2035, and then drop below today’s population to 405,000. The only population growth would come from migration.

The result
Malta is a country rooted in tradition. In such a sensitive place one cannot design using the fully technological approach, instead we must compromise and keep in mind the cultural and social values which make up the identity of the country.

The following list of examples sheds some light on the current state of development of high-rise in Malta – at whom they are aimed and what their intention is. The list includes contemporary buildings erected during recent years as well as buildings under construction together with their principal objectives.

Are we taking into consideration the right issues when designing these high-rises? Do these objectives promote the integration of the old and new, of cultural and technology, of economy and environment? Will they fulfill the needs of the population as it grows and reduces? Is their purpose just to attract more (wealthy) migrants? What too of the resources (water in particular) of the country if migration population growth is their main aim? You be the judge.

We quote from the developers’ write-ups, so enjoy the jargon. It spells out clearly that these high rises are all about prestige, luxury and exclusivity.

Pendergardens
“Pendergardens is a prestigious, self-contained property development covering an area of 18,500m2 and is strategically located in St Julian’s Malta, … offering all the amenities of a metropolitan centre, yet with all the comforts and security of an exclusive community…. This property development area is car free and surrounds a large piazza creating a peaceful and tranquil setting.”

Metropolis Plaza
“This innovative and vibrant project is leading the process of the ongoing regeneration of the Gzira marina district. Metropolis Plaza is bringing together local and foreign architects, designers and engineers holding a vast expertise on the building of high rise city developments with one main objective in mind… that of constructing a landmark building that will be a benchmark in architectural design and living standards on the island.”

Fort Cambridge
“Designed to encapsulate Mediterranean tranquility, Fort Cambridge luxury property in Malta is a breakthrough in modern living combining contemporary extravagant lifestyle with history. Situated on the site of an historic fort in Malta, the seafront apartments in Malta offer residents apartments, duplexes and penthouses with spectacular sea views, a safe, serene environment and proximity to high street shops and restaurants.”

A3 Towers
“…A3 Towers, one of the most forward looking and comprehensive real estate projects ever planned on the island. A unique tower of brand new apartments with a vision of modern comfort and sophisticated living set up covering 14 floors and situated in the South of Malta near the Golf Club. This unique real estate development includes a vibrant mix of luxury homes, offices, stylish shopping and trendy cafes and leisure amenities.”

Blue Harbour
“With the Msida Yacht Marina only a few meters away, [at Blue Harbou] one can have their boat berthed for an effortless weekend trip around the Maltese islands. Blue Harbour is tucked away in a peaceful upmarket area. Ta’Xbiex offers a quiet, secluded environment with magnificent villas dressed in a variety of architectural styles, from colonial to art nouveau.”

Portomaso Business Tower
“Located in the heart of St Julian’s, the state-of-the-art Portomaso Business Tower has become one of the country’s most iconic modern landmarks. At 98 metres, it was built to offer a top-quality business environment. Opened in 2001, …it remains the leading business address in Malta.”
www.tumasdevelopments.com

Forth Mansions
“A new development inspired by the old submarine service ship HMS Forth, has been created to provide luxury homes for the few lucky enough to have residences there. Like her illustrious namesake, the Forth will provide homes in the beautiful setting, overlooking the marina and the bastions of Valletta. “
www.cassarcooper.com