Malta has some hidden gems that most island visitors and even us locals miss. Ħal Millieri chapel dating back to medieval times is one of them. Its importance among Malta’s numerous historic sites far outweighs its size. It houses some rare frescoes that were almost lost to time.

For a glimpse of them and an excuse to visit Malta’s south, catch the annual Open Day at Ħal Millieri on Sunday 27 March (9.00 – 18.00), timed to coincide with the celebration in honour of the Annunciation of the Virgin Mary, the tiny chapel’s patron saint. The chapel is open the first Sunday of every month (09.00-12.00), if you miss the open day event. 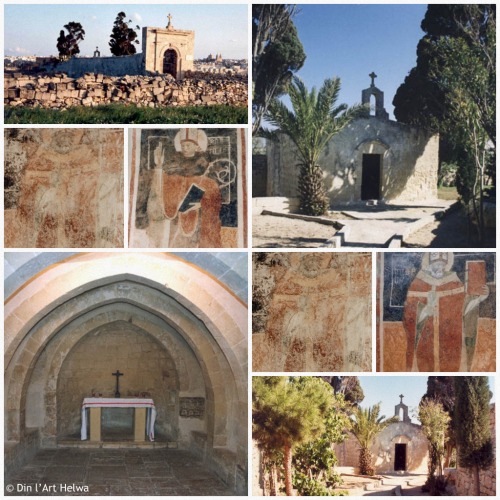 A rare glimpse of Medieval Malta: the gem wayside chapel of Hal-Millieri

A potted history
The chapel of the Annunciation at Ħal Millieri is a prime historical monument of Malta’s medieval past. The present building dates to around 1450, and excavations have shown it to have been built over the site of an earlier, possibly 13th century chapel, and a much older late-Roman rural complex.

The Ħal Millieri chapel is best known for its medieval architectural elements, and more so for the unique set of frescoes which adorn the side walls between the springing of the arches. The anachronistic cycle of effigies of saints, which is believed to have been copied from the earlier primitive chapel, have been expertly restored through the efforts of Din l-Art Ħelwa (an NGO and ‘Malta’s National Trust’), as Malta’s best example of medieval vernacular religious art. For a full history of the chapel, click here.

Open Day Info
Holy Mass will be celebrated at 10:00am, followed by the blessing of the adjoining churchyards. The service will be conducted by Rev. Fr Raymond Cassar. Din l-Art Ħelwa, the volunteer heritage organization that holds the chapel in trust, will be offering two guided tours of the site by historians Dr Stanley Farrugia Randon at 11:00am and Mr Salvator Mousu` at 3:15pm. See also, Din L’Art Helwa.

How to Get There
The chapel can be reached from Imqabba Road at the Żurrieq end of Blue Grotto Avenue, or from Diamond Jubilee Square (tal-Mentna) at the end of the Imqabba bypass.