Simshar, the boat, went missing in July 2008 with its crew – three Maltese fishermen, the 11-year-old son of the captain, and a Somali man. The boat had exploded, leaving one survivor; what happened is shrouded in mystery. Now, Simshar, the movie, using the event as the catalyst, is Malta’s first, homegrown, full-length feature film for an international audience. Its young director and joint scriptwriter Rebecca Cremona charts a course through issues of immigration, love and politics. With the prospect of boatloads of irregular migrants crossing the Mediterranean as the Libyan crisis unfolds, her script has more resonance today than she first realised. The teaser trailer got over 7,000 hits in four days of going (virally) public. Here, Rebecca gives MaltaInsideOut a privileged insight into perhaps why.

Q. Give us a synopsis of Simshar, the film?
Simshar is a three-tiered story. There is the story which is inspired by the events that occurred on that ill-fated boat, the Simshar. This story thread also touches upon the fishing community in Malta, and the pull between tradition and modernity which this community, and indeed the entire country, is faced with.

Also related to this tradition-modernity tension, is the love story. This plot revolves around the relationship between a Maltese soldier and an Eritrean migrant. The intermingling of the personal and the political are key to this narrative, and it is this concept – that political forces larger than any one government, inform and sometimes dictate, very personal aspects of our lives – which is the crux of the entire film.

To represent the ‘politics’, is the strand which is inspired by various immigration rescues and political debates between countries over migration. In this story, a group of migrants is rescued by a merchant vessel. Crew and migrants are stuck on the vessel for days, as Malta and Italy debate over who should take them.

The three strands unfold and increasingly intertwine to disastrous effect.

I would like to stress the word ‘inspired’. This film is a fiction film, not a documentary. It is not intended to replicate any of the myriad of events which were plucked out of real occurrences. Neither does it presume to have a solution for the complex issue. Furthermore, the characters in the film have been drawn to serve the story and its themes, not to provide a true to life portrait.

The goal of this film is to explore a very complex issue – that of migration from Africa to Europe. The stories it is inspired by, I found to be the ideal vehicles for this purpose.

Q. The trailor is our only glimpse so far into your narrative. Its use of North African music overlaid on scenes so clearly depicting Catholic Malta already jolts the viewer. What did you intend to provoke in us with the trailor?
Your comment about the music is very interesting. Indeed we are depicting Malta and its Catholic traditions, which are still very central to village life, as well as the African cultural influence of the migrants. The juxtaposition of these two cultures, which sometimes clash and at other times complement each other, is the fundamental context of the film.

However, when it comes to the music especially, it is not as simple as all that. Maltese music – like Maltese language, food, architecture and other cultural aspects – is heavily influenced by African culture. So, for example, the music in the trailer which plays over the underwater sequence and the final sequence, is a Maltese piece. And yet from what I can gather from comments and blogs about the trailer, is being perceived by Maltese as Arabic.

Now, the piece of music in question was written by Ruben Zahra – a Maltese Folklore expert. The voice, which was later designed by Aleksandar Bundalo – a fantastic sound designer of Serbian origin who has worked locally for several years – is actually ‘singing’ lyrics by Trevor Zahra. The song is very Maltese, but like most Maltese artifacts, includes an endemic Arabic influence derived from history.

In terms of the intention of the trailer, this is a teaser trailer. Its function is to help us raise money for the actual film, which has not been made yet. In light of this, our intention was to show the feel of Malta (especially given the fact that the majority of the potential investors are foreign), the cinematic potential of the story, and our ability as a team. More than information about the narrative, it is meant to convey a feel which will hopefully intrigue the viewer to know more!

Q. What reaction are you seeking to provoke in the audience – both local and international – with Simshar?
My intention for both local and foreign audiences is the same: I would like to bring to screen a compelling, human and humane story which provokes thought about a complex issue. Invariably, there will be a differences in the way these audiences view the film. I can only hypothesise, but I guess that due to the local audience’s experience of irregular migration and opinion about the ‘Simshar’ tragedy, it is more likely they treat it as a documentary, rather than a dramatic piece in its own right. Although this is not ideal, it is understandable. When the opening shot of ‘The Count of Monte Cristo’ shows the Grand Harbour, and says ‘Marseille’ underneath, the local audience finds it hard to separate the reality of the film from that of everyday life… 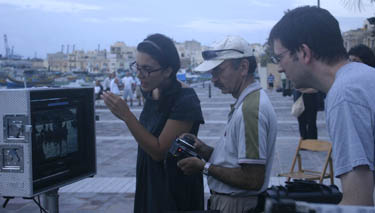 Q. The way the trailor was shot has elements that shout ‘Mediterranean director’ – akin to Tornatore with his family epic Ba’aria for instance. Do you think your roots influence the way you approach filming? Consciously or unconsciously?
I do not consciously strive to be a Mediterranean director. Having said that, it was this environment which I grew up in and I love, that inspired me in the first place. If elements in the trailer scream ‘Mediterranean director’ I think it is more because of the dictates of the story and the milieu than anything else. ‘Magdalene’ was set in 1930s California, and consequently looks and feels completely different. As a filmmaker I allow myself be dictated by the essence of the story I am telling. For me, the mode of filmmaking should come out of the story and not be imposed on it.

Q. What are your hopes for the film?
I really hope we get to make this film, in the way we would like to make it. Unfortunately, the film industry is a tough place and in this economic climate, all the more so. However, I am hopeful – we have a talented team and a very important story. And if the response to the teaser trailer is anything to go by, we’re on the right track.

Q. Rebecca Cremona and who? Can you tell us a bit about the core team behind Simshar? The local talent involved?
I am so glad that you asked this question. Film is such a group effort, and although I believe that a strong individual vision is necessary I cannot stress enough how essential a good team is. In fact, many prominent filmmakers work with the same teams over and over again, a fact which is testament to the team members’ integral importance.

I have worked more than once with every core team member involved in Simshar, and there is a reason for that. I would love to go through them individually here but know we’re limited on space! I would like to mention my co-writer David Grech: I never thought I would be able to write with anyone but myself. Then David and I started discussing the script, and his insight and ideas were so valuable that I had to bring him on board. The script is the film’s foundations, and his input is invaluable. Many people were involved in the creation of the trailer, and I would encourage people to look at the credits. We have a lot of talent in Malta…

Q. What else should we have asked you?
Where anyone intereted in investing in the film can contact me! The answer to that question is: info@simsharthefilm.com. I would like to thank those who already support the film, namely: River Dream Productions, The Malta Film Fund, Xtreme Effects, Air Malta, and Bank of Valletta.

Rebecca Cremona, film director and scriptwriter, has packed a lot into life so far. She studied comparative film and literature at the University of Warwick in the UK and went on to do her second degree in film directing at the American Film Institute and Art Center College of Design in Los Angeles. A short film she completed in early 2009, ‘Magdalene’ (trailer here), won her a Student EMMY and a Director’s Guild of America student award. Simshar, the movie starts filming later this year