You are here: Home / Language & Literature / Pierre J. Mejlak: in his own words

Pierre J. Mejlak is one of Malta’s finest young writers. He has published books for children, adaptations, a novel – which has been turned into a TV series – and a critically acclaimed collection of short stories. In the process, he’s won a Malta Literary Prize, two National Book Awards and the Sea of Words European Short Story Award. Pierre’s next project is a collection of short stories for adults, to be published by Merlin in 2011. Sneak previews have already described it as ‘powerful and exquisite.’ 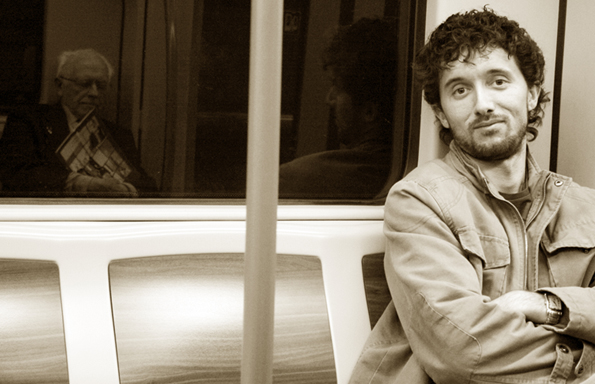 Pierre J. Mejlak, in a carriage somewhere between Gozo and Brussels.

I was brought up in the neighbouring Gozitan villages of Qala and Nadur in the eighties. They’re a stone’s throw away from each other but there are differences. To start with, there’s Nadur – a proud little town perched on a hill. Most of its people are returned migrants, who, for some years, enjoyed an unrivalled purchasing power in Gozo, earning them the title of New Yorkers. The people of Qala are somehow simpler and more humble. Even their choice of patron saints – Church pillars St Peter and St Paul on one side and carpenter St Joseph on the other, must say something about both peoples.

A group of young men from Qala once went to a crossroad between both villages and sprayed ‘New York’ with an arrow pointing to the road leading to Nadur. I can imagine them going back home that night, thrilled at their wit, and convinced that the people of Nadur would remove every trace of their opus by morning. Instead, morning came and ‘New York’ was still there, but with another word sprayed a few metres away with an arrow pointing at the opposite direction. Calcutta.

I’m fond of both villages. They balance each other and I feel at home in both. No day in Gozo would be complete without a stop at Zeppi’s Pub (formerly known as Tal-Baharru) on Qala Square and, in summer, a swim at as yet-unspoilt Hondoq ir-Rummien. Rhythms in both villages are still slow and lazy and everything seems like it will never change. Some of my stories are set in these villages, including ‘Is-sajf tad-89’ (the summer of 89), ‘Talb’ (prayers), ‘Il-hofra’ (the hole), ‘Mill-gholi tas-sema’ (from high up in the sky) and ‘Jacqueline’.

I lived in Qala until I was eight. My family managed the Nationalist Party club, where a handful of men used to meet every night, after dinner, to talk about everything but mainly politics. It was from my favourite spot in that bar – underneath the billiards’ table – that I learnt to observe. My memories of those years are all gathered in my short story ‘Dar ix-Xoghol’, which was published in my first anthology of short stories for adults, Qed Nistenniek Niezla max-Xita (I’m waiting for you to fall with the rain).

People are a constant source of fascination and curiosity. I think up stories about my neighbours and then end up dodging them, in case they reveal something that will contradict my fictions about them. I like to observe people – on my way to work each morning, at a restaurant, on a plane or at the cinema. I usually write when I’m alone, ideally at home or in a room without too many distractions. A story can develop from a little thing that inspires me – a face in a crowd, a song that rekindles a memory, something that strikes me while I’m stuck in a traffic jam. Of course there’s a bit of me in every story. But, usually, it’s just a little bit.

I started writing when I was young – around twelve or thirteen. Call it the vanity of seeing your name in a school magazine. Writing made me feel comfortable in my own skin. I realised early on, that I was no good at mathematics, or would ever make it as a scientist. School gives you an early barometer for what you’re cut out to do.

When I was thirteen, I decided to work through summer to secure some financial independence. The only place that was safe for a child to moonlight was Comino – the authorities went easy on spot-checks there, back then. I spent weeks carrying cutlery from the dish-washer to the restaurant, and – often – kept a safe distance away from the guests. I remember being on the boat, in the early hours of one morning, getting drenched with spray and something snapped. It was then I decided I should write. I spent the rest of the summer writing a mildly embarrassing story: after a few years and some major editing, it became my first published book.

At 21, following my final University exam and hungry for experience, I left Gozo to work for the European Union’s publishing arm in Luxembourg. I spent a few months there before moving to more cosmopolitan Brussels. That’s where I found my voice and where I started writing for real. It’s one thing visiting a place on holiday and hoping for inspiration – quite another living somewhere foreign without thinking of having to leave. Feeling part of a larger world is a wonderful sensation.

I think becoming part of the EU was one of the most exciting things to happen to anyone of my generation. Getting in from the main door is something that we have started to take for granted. I come from a family of returned migrants. My parents met in New York, some of my relatives are still there. So I grew up tuned to their stories of grafting to make ends meet in a strange city … struggling to find networks, trying to find a way of surviving and not getting kicked out. Nowadays, young people in Malta know they always have an exit route to another life.

I’ve been back in Malta for just over a year and I’ve had to renegotiate how I write. I think that in a small place like this, it’s as easy to get consumed by the idea of trying to make a difference as by the anger of not being able to. It’s not always possible to detach oneself and disengage from the trivial stuff of a small island. To feel part of a larger world, on Saturdays I buy La Repubblica or Le Monde and skim through it in a café in Valletta.

My long pit stop in Malta is a sabbatical of sorts – definitely not a working holiday. I felt it was time to let my country surprise me, to see what it feels like to live in its capital city and to keep looking for where home really is.