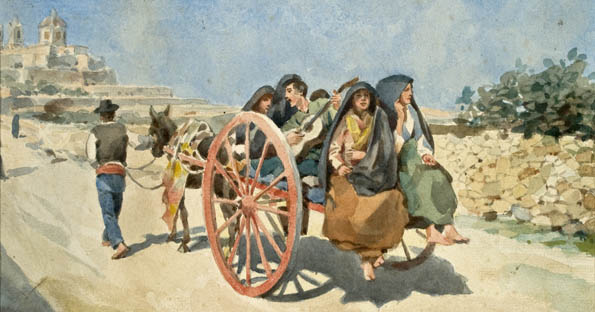 You'll still see these carts on Malta's roads, even if the dress has changed. Painting: Edward Caruana Dingli

Edward Caruana Dingli (1876-1950) is without doubt one of the finest artists Malta has ever produced. His love for all that was beautiful and his impeccable eye for detail, coupled with an unfaltering technique, produced the most appealing and charming of paintings of the 20th century. Patrimonju Malti, a non-profit-making heritage foundation, is bringing some 250 of Caruana Dingli’s paintings together in a magnificent exhibition running in May in Valletta.

If you are a visitor to Malta, and don’t know of Caruana Dingli, the exhibition will give you an amazing insight into not only Malta’s rich artistic heritage, but also a glimpse into Island life and Maltese personalities of times past.

Born into an artistic family in Valletta in 1876, Caruana Dingli had a knack for drawing from a very young age. In 1913 he gave up his military service to fulfil his long standing ambition of becoming a full-time artist. He was well connected with the Maltese elite as well as the British government in Malta, and as a result had no problem finding work. His talent and dedication saw him rise to the top in his field, and he in fact led the artistic scene in Malta through the first half of the 20th century. Artistically, he was direct heir to Giuseppe Cali, his friend and mentor, and passed the baton on to his own students at the Malta Government School of Art. Edward Caruana Dingli continued painting until his death in 1950.

His subjects and technique

Primarily a portrait painter in oils, his sitters included some of the most prominent figures of Maltese society, as well as nobility, politicians, clerics and prelates. They were portrayed wearing their most lavish clothing, jewellery and badges of office. Caruana Dingli had the superb ability to capture his sitter’s personality and to immortalise it on canvas. His portraits are both captivating and engaging. His male figures exalt pride, power and earnestness, while his female portraits depict sensuality, elegance and sophistication. 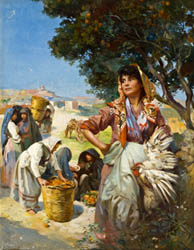 In contrast, his folkloristic themes, mainly in watercolour, celebrate the spirit of the Maltese countryside, its coast and village squares. His numerous street scenes include farmers returning with their flocks, hawkers at markets and children playing traditional street games. Whatever the subject, his paintings are characterised by a prominent verve and charm, accentuated through his unpolished brushwork of rich brilliant colour.

Fondazzjoni Patrimonju Malti is giving visitors the opportunity to enjoy 250 of his most remarkable works, brought together from collections around Europe. Patrimonju is resuming its prestigious exhibitions after several years working on the restoration of Palazzo Falson, which is now open as a Historic House Museum in Mdina. The palazzo holds frequent art, culture and heritage talks and events like these. So do check its calender.

Opening Times
The exhibition is open daily from the 8 May – 6 June, 10.00-17.00hrs, at the Palace in Valletta. An exhibition catalogue will accompany the event. For more information, visit patrimonju.org.