You are here: Home / Preaching to the Converted: Pope Benedict in Malta 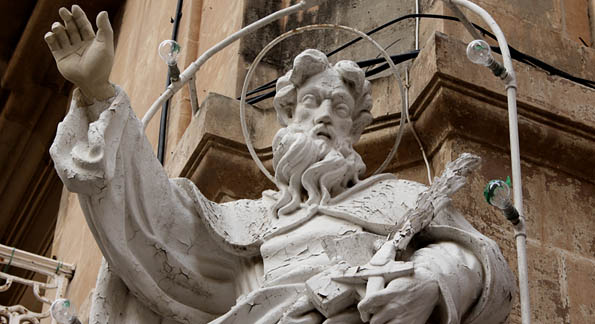 It's OK, the real live wave is coming soon

Pope Benedict XVI’s visit to Malta, scheduled for April 17-18, is to celebrate the 1,950th anniversary of the shipwreck of St Paul (Malta’s patron saint) on the islands in A.D. 60. Malta will be his 14th trip overseas since becoming Pope and makes an ideal visit outside his home territory.

Malta is near (an hour from Rome); has a population that’s stated as being 98 per cent Roman Catholic, and is guaranteed therefore to give him a vociferously warm welcome; is safe (little likelihood of the allegedly deranged leaping barriers to have a go at him); and it has a history steeped in defending the faith (as home to the Knights of St John for around 250 years).

There are also the benefits of Malta that most tourists enjoy – Malta’s compact size means the Pope, according to his published programme, will pass through some 33 parishes (just under half the total). The Popemobil won’t stop in all of course. During the visits of Pope John Paul II (1990 and 2001), many parish priests were disappointed, to put it mildly, as all they saw of the Pope was a papal wave from a rather high-speed Popemobil. Allegedly too, local legend has it, nuns were known to have used rather interesting methods to get to the front of the crowd during previous papal visits.

No doubt Pope Benedict’s trip will provide years’ worth of anecdotes along with memories of his astute addresses and the solemnity of religious ritual, handshakes with the President and blessings. Leaving aside the logistics, you’ll come across mumblings about the Pope’s visit. The Vatican has said that the Pope’s visit will be a time to reflect on and deepen the Christian faith. Here’s a round up of some issues minorities would like the Pope to reflect on in Malta, but on which he is he is unlikely to:

Interfaith Dialogue: When the Pope visits Britain later this year, interfaith dialogue will have to be on the agenda given the recent schisms in the Church of England and the multi-faith make-up of the UK. But, in Malta, with a solid 98 per cent (not all practising of course) Catholic, his agenda setters see no need to bother with it here, despite calls from Hindus and Jewish leaders across the world for him to urge Malta to have greater moral responsibility towards minority faiths on the Islands. The minority will just have to let the show go on. But, we should reserve judgement till we hear the Pope’s addresses, though it seems he will play to a home crowd only.

Religious equality under Maltese law for minority faiths: Linked to the point above, is a similar call by influential spokespeople of other world faiths for the Pope to urge Malta to treat all religions and denominations equally under its laws. Malta’s Criminal Code reportedly makes one liable to imprisonment up to six months for publicly vilifying the “Roman Catholic Apostolic Religion”, while committing such act against “any cult tolerated by law” makes one liable to imprisonment for up to three months.

Teaching of comparative religion in Malta’s schools: While religion is not a compulsory subject in the curriculum, there are those who feel religious teaching in Malta’s schools should include information about all world faiths, not solely the dominant Catholic religion. Children get a lot of Catholicism from their upbringing, family and parish yet have no formal way of being introduced to the teachings of other world faiths in the spirit of understanding, broadening horizons, tolerance for other’s beliefs and so on.

Pope Benedict’s 13 journeys to date have been tailored to national situations. Malta, with its homogeneity of faith, doesn’t require him to raise these issues. Both fervent Catholics and the less so will be living in hope then for the Pope’s visit. One group may be more disappointed than those parish priests who missed John Paul II – at least they got a brief wave. The minority voices here most likely won’t even get a cursory nod in their direction.