You are here: Home / The Nadur Carnival 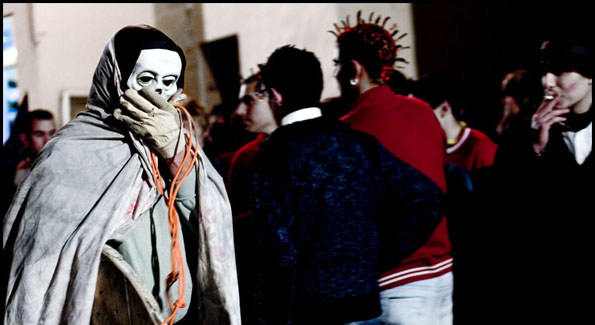 Everybody's watching someone at the masked Nadur carnival

Carnival is long-embedded in Maltese folklore. This weekend, you get the chance to experience two different types of carnivals. You can go to Valletta or Rabat, in Gozo, for the organised, structured floats and dance programmes. Or you can head to Nadur, in Gozo, for the ‘alternative’, spontaneous carnival, which kicks off on the 8th February, and draws to a close on the 13th.

Around a decade or so ago, the Nadur carnival was a well-kept secret. A little gem of a carnival, its charm stemmed from the silence of masked crowds in the streets of the village. The game was about disguise: grotesque masks or badly-daubed make-up, wigs, costumes from sheets or sack cloth, makeshift, disorganised parades often accompanied by farm-stock and carts. In the general attempt to avoid being recognised, the carnival often became associated with the absurd and often the bizarre: cryptic placards, coded messages to friends and foes. A silent carnival, a veritable masked street ball.

Things change. As the event’s reputation grew online and by word of mouth, it became the carnival to go to for a new generation of Maltese, possibly bored with the traditional fare served in Valletta and attracted to the edginess of the Nadur festival. The new influx of visitors was also a shot in the arm for anyone in the Gozo tourism and hospitality sector in the winter shoulder months. From a purely ‘Nadur’ affair, the carnival has become a very Maltese occasion. This weekend, boatloads of young Maltese will cross for the annual pilgrimage of masked fun, or a vulgar, alcohol-fuelled rave party, depending on which side of the debate you happen to be.

And as for debates about the carnival, they have raged and ebbed over the past years. Although the carnival has a history of revellers dressing up as priests or nuns, around three years ago Malta’s Archbishop Paul Cremona and Gozo’s Bishop Marco Grech issued a statement about the need to ‘recognise and respect religious and civil rights’. As things stand, the law does not allow people to wear ‘any ecclesiastical habits or vestments’ without permission as this constitutes ‘offending public order’. Malta’s laws also prohibit the use of words or gestures that vilify the Roman Catholic Church.

Soon after that famed edition of carnival, a 26-year-old was given a one month jail term suspended for 18 months after he pleaded guilty to dressing up as Jesus Christ during the carnival celebrations. Six people who dressed as nuns were acquitted after the court found the simple fact of dressing up as a nun, even if at carnival time, did not, on its own, amount to vilification.

The public backlash was not long in coming. A Facebook group was set up to encourage people to dress up as Jesus at the following year’s Nadur carnival. And then there were incidents such as the Nadur local council and police requesting to vet the lyrics of rock bands playing at the carnival ‘to eliminate offensive or vulgar language’. The furious online backlash from bloggers and pundits forced the police to swiftly issue a statement retracting their request.

Comedy or tragedy? Malta’s own version of growing up pains, of old power systems slowly coming to terms with the sign of the times?

Whichever way you look at it, the Nadur carnival hovers somewhere between the past and the future.

More on the carnival on the Nadur Council site.