You are here: Home / A medieval gem: Bir Miftuh Chapel 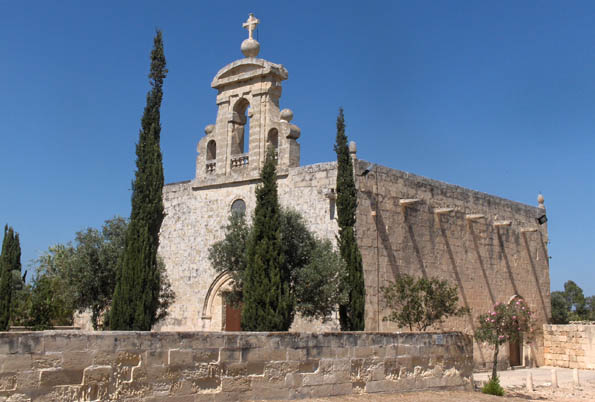 Despite the ravages of time and war, Bir Miftuh is immaculately preserved today

Din l-Art Helwa is an NGO founded in 1965 to safeguard the historic, artistic and natural heritage of Malta. Here, Victor Rizzo, the treasurer of the organisation, kicks off a series about the key cultural heritage properties managed by the organisation in Malta, Gozo and Comino which are open to the public. This piece is about the ancient chapel of Bir Miftuh, which stands opposite Malta International Airport. Glance right as you exit MIA to catch a glimpse of it.

The Chapel of Santa Maria ta’ Bir Miftuh is an outstanding example of medieval architecture. Built almost 600 years ago, it saw the arrival of the Knights, was desecrated by the Turks during the Great Siege of 1565 and suffered bomb damage in the Second World War. Located in Gudja, it is one of the best preserved examples of a parish church of the 15th century. It was declared a parish in 1436 by Bishop Senatore de Mello and served as such until 1676 when the Parish Church of Gudja was built. It was never in the centre of a village but was had parish church status and served several villages.

The chapel is free standing and shows a growing confidence in the handling of stone structures. It is simple and austere in design, with fine pointed stone arches on which rest the long stone roof slabs. It has a plain rectangular plan and measures about 11 by 14 metres.

The chapel was originally larger and built in the shape of a cross. In the 16th century the rear end of the chapel was demolished and the stones were used in the construction of the present parish church of Gudja. An imposing belfry, a 16th century addition, perches proudly over the main doorway. No bells are in place. Legend has it that these bells were hastily buried in the soil during the Great Siege of 1565. They are still waiting to be discovered.

The altar was brought from another chapel and dates from the 16th century. The altar painting is on wood and probably belongs to the second half of the same century and depicts the figure of God holding a Crucifix surrounded by angels at the top of the panel. The lower part shows a hilly landscape with the Virgin and Child on clouds flanked by St Peter and St Paul.

Over the centuries the chapel suffered from neglect and lack of use. It was close to total collapse until the Ecclesiastical Authorities gave the chapel to Din l-Art Helwa in Trust in 1970. Restoration started in 1973 and was generously sponsored by Malta International Airport, which continues to support it to this day.

During restoration, the remains of a fresco covering the wall facing the altar were discovered under thick layers of lime. The fresco depicts the Last Judgment and is divided into three tiers of figures. The upper tier shows the Apostles and Mary with the figure of Christ in the centre. The figures below this tier represent Mary, a hand holding a sword representing St Paul, St James and St Andrew, St Lawrence, St Benedict holding a church model, Peter the Martyr, and possibly St Catherine holding the palm of martyrdom. The figures above this tier show a kneeling saint representing St John the Baptist, four unknown female saints, St Ursula holding a pike-staff and St Barbara holding a model of a round tower.

The second tier shows the damned being led away to the fiery pits of hell by demons with horns, tails and webbed feet. On the left side one can make out the wing of an angel and the back of one of the faithful being drawn towards God and the Virgin Mary.

The lower tier probably depicts the expulsion of Adam and Eve from the Garden of Eden. On the north wall, in the first bay, there is a picture of a woman, in a costume fashionable in the 16th century, holding a lily in one hand and pointing to the main altar painting with the other.

The frescoes were expertly restored and regular inspections are carried out. Further restoration involved the repair of all walls and a leaking roof. The floor laid in 1942 was replaced with globigerina limestone flagstones, and the exterior areas adjacent to the walls were paved. In 2004, restoration of the churchyard at the back of the chapel was completed.

The Chapel is an ideal setting for the Bir Miftuh International Music Festival held regularly in the Summer by Din l-Art Helwa since 1997. It is open for visitors the first Sunday of the month from 9.30 till noon.

For more details on Din l-Art Helwa, see the website or e-mail info@dinlarthelwa.org