You are here: Home / Cloud-busting in Malta 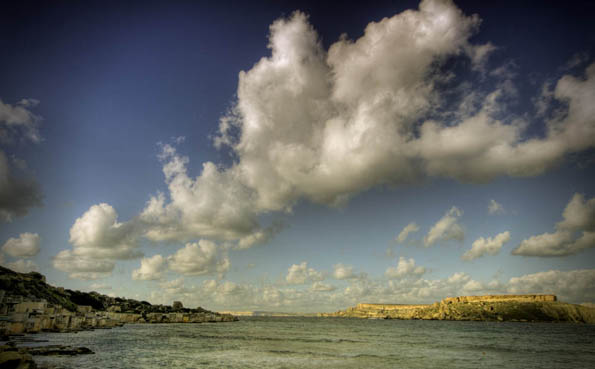 For once in Malta, hot air that makes a real conversation piece

Therese Debono rekindles a childhood passion and pastime – cloud busting – and shares some of the hairy and peaceful moments of capturing stunning cloud formations on film.

Since a young age, I have always been fascinated by clouds. I guess every kid makes shapes out of clouds passing by. My earliest recollection is of my cousin and I lying on our backs in our grandfather’s garden….cloud gazing, trying to find some human form or other in the clouds. Our respective parents used to always say we had our heads in the clouds, and they were far from being mistaken!

Years later…..and I am still cloud gazing, or rather chasing at this point because if there is one thing I love shooting, its clouds. There is something about the play of light on clouds and their shapes which really make me want to chase and capture beautiful shots.

My cloud chasing though began quite by chance. I was down taking a few seascape shots in Gnejna last November and I was captivated with these big fluffy white clouds and since then I just haven’t stopped looking for them.

It is quite dangerous sometimes especially when I am driving, and all I want to do is look up! It’s not the first time that I found myself driving as fast as I possibly can to reach the perfect destination with the perfect clouds……the search is endless really. The evening colours can be surprising too and add more to a shot. It’s a matter of timing and also luck with clouds. It can also be disappointing, but perseverance pays and so far my cloud chasing expeditions have always left me thrilled and pleased!

It’s also thanks to this that I have learnt to appreciate more our nature, our beautiful Maltese landscapes and seascapes and also how to read the light. I am more aware now of sunset times and more often than not, it’s a race against time, running after these clouds right after work when at 5pm it’s usually rush hour….whereas I am in a rush chasing clouds….

Going home from work has become an appointment I never miss. With my camera in the front seat, I look up at the sky and head in the direction of the best clouds…….

This shot above was the first of the series of my cloud chasing. Shot at Gnejna in November 09, I just couldn’t resist the giant sized clouds drifting along. In contrast with the blue sky, this shot deserved a beautiful yet simple backdrop, and I happened to be in the right place at the right time.

We’ll be featuring a series of Therese’s moody and magnificent clouds in the coming week or so.