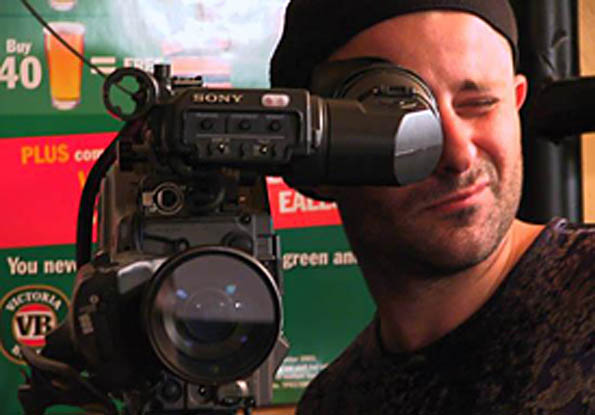 Ramon Mizzi is a film maker, currently reading for an MA in TV & Interactive Content at Birmingham City University, UK. In October 2009, his short film ‘In the End’ won Best International Contemporary Short in the New York International Independent Film & Video Festival. His brother Alexis was Director of Photography and co-producer of the film.

How did your interest in film start?
Our interest in film started way back as kids, when we used to go to the cinema on a weekly basis. Our grandfather Nenu owned Warner Theatre cinema in Qormi and we watched all the classics on the big screen there. In 2002, we decided to drop our current jobs and move to Sydney to get film training and after four years we graduated in Film Making with Honours.  Our thesis film won three awards in Malta and the protagonist was Jon Siveright from ‘Home & Away’ fame.  He just loved the script. The antagonist is Cristie Giordimania, a brilliant Maltese-Australian actress. ‘Moving On’ can be viewed here.

Where has your career taken you so far?
After finishing our course of study, we moved back to Malta and in 2007 we were employed by the Ministry of Education at the National TV Archives at PBS (Malta’s public broadcasting service). Our duties included restoring, archiving and sorting out the Maltese national treasure found at PBS.  Six months into our contract, we were commissioned to produce a daily five-minute feature for TVM called MILL-ARKIVJI.  We are proud and lucky to be able to show our country’s historical and cultural content to Maltese viewers. We loved working on it. Working with distinguished talent like Charles Abela Mizzi among others increased our knowledge and skills to be better broadcasters.

In May 2008, we were commissioned to work for KOPIN a Maltese NGO Platform to work on the GLOBAL ACTION SCHOOL MALTA VIDEO 2008 project. We wrote the script, filmed and edited it. It was so cool to work with teenagers and NGOs, exposing youngsters to the world of video making, and we involved them as much as we could.  The video was seen in the 27 EU Countries and Thailand and we produced it in such a way to promote Malta as a holiday destination.

Between April and August 2008, we were commissioned to work on a Wedding Documentary. Since weddings are not our cup of tea, we decided to jazz it up and steer off from the run-of-the-mill boring wedding videos. Luckily the couple involved are artists too and quickly took on board our idea. The finished product is an awesome off-the-wall wedding that they will cherish all their life.

2009 started as a slow year, because of the world crises, so Alex and I decided to do something, and came up with the concept for a contemporary short film

What was the inspiration for ‘The End’? How important is Malta as a backdrop for your work? And why did you select your father for the main role?
In December 2008, our last grandfather passed on. We couldn’t help noticing our big family gathering around him on his death bed, and I found myself asking whether I’d be as lucky at his age, to have so many and so caring a family around to say goodbye. Probably not, since I don’t plan to have 11 kids! Suddenly, the concept for ‘In the End’ was born. From the first draft to the 15th, I was continually twisting and turning, researching issues related to the elderly, until both Alex and I were happy with it.

Malta has excellent locations (although our film is mostly interiors). The weather is film-making friendly with continuous sunshine, not much rain and most of all the Maltese people are very accommodating when coming to film in houses or private properties. That is extremely helpful for us film makers. Something I experienced in Malta is the ease of access to locations compared to other countries.

Casting was easy since while writing as I had the actors in mind. Paul was portrayed by Philip Mizzi, my dad. We have known dad as an actor since we were kids and wanted to cast him in a film of ours. We talked about this from Australia while at film school, so finally the chance popped up.

You’ve just won a major award. What does this mean for you (and your brother) professionally?
To keep doing what we are doing and building on what we’ve got!! Winning in the US especially, is very encouraging as we know that we are on the right track. We have to improve a lot of things to reach higher levels, but at least it’s a start, considering that this is our second short film. Also maybe this award will help us tap into more funding and contacts to put Malta on the film-making map worldwide.

Do you think that creatives have to leave Malta to ‘make it’?
Well, this is a hard question. I can say Yes and No, because it’s a double edge sword. Leaving Malta will get Maltese talent exposed to the professional practices that professionals overseas abide by, like a bible. While in Malta, since film training amongst other things is lacking, things are done, let’s say differently or inappropriately. But it is easier today than say 10-15 years ago to get a Maltese film recognised and promoted overseas what with social media networks, interactivity and cheap flights. So long as you have a good story. With hard work, persistence and dedication, a Maltese short film can easily make it to any film festival overseas. On the other hand, Malta offers a lot of great things to film makers; I’ve worked on productions in Sydney and now in the UK and things that are easy to get in Malta are very difficult or costly in these countries.

What do you miss about Malta by being away?
The awesome Maltese weather and the beautiful Mediterranean sea, since currently I reside in the UK. I miss also the typical Maltese bread (being from Qormi) and friends that have always supported us in whatever we did.

Is there anything else you’d like to add?
Keep on dreaming, because those who dream achieve, we wish to say to young Maltese film makers, never quit and follow where your heart wants to go. Work your networks well and ask for help when you need it. If you are true to yourself you will make it.