You are here: Home / A Walk on the Wild Side 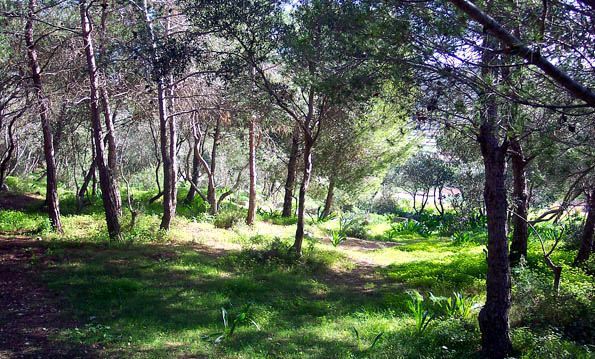 Il-Mizieb: 20th century and man-made maybe, but worthy of its name as a wood

One of the most common observations made by foreigners visiting Malta concerns the island’s lack of trees when compared to their countries. To the outside observer, Malta appears as a treeless, arid landscape where even the few trees around seem short, stunted and windswept.

It was not always like this of course. Before the advent of prehistoric man, Malta possessed a rich tree cover, which was slowly but steadily cut down and cleared either for use as fuel or to create agricultural land. Today, very few remnants of the original Maltese forest survive, foremost amongst which there is the small oak grove known as Il-Ballut tal-Wardija which contains a handful of one thousand year old oak trees which provide direct continuity with their prehistoric predecessors.

Over the centuries, there have been some attempts to reintroduce woodland to Malta, with the most famous being that of Buskett, where the Knights of St. John designed and created a small wood in which they could hunt imported deer and boar. Buskett is today Malta’s foremost woodland and is capable of self regeneration, implying that nature has taken over from what was originally a man-made environment.

Mizieb: Malta’s northern woodland
A more recent woodland creation took place in the 1970s on what used to be an exposed ridge in the northern part of Malta, specifically Mizieb, lying between St Paul’s Bay, Manikata and Mellieha.

The ridge was extensively landscaped even through the use of explosives to blast the solid rocky surface so as to enable the newly planted trees to dig their roots deep and thus find sustenance and water especially during the parched summer months.

What trees you’ll find there
Over the past thirty five years Mizieb has thrived and matured and has today grown to constitute one of Malta’s finest stretches of woodland; well worth a visit and a walk in an unusual Maltese habitat. The site consists almost exclusively of Aleppo Pine trees, the Maltese znuber although one also finds other varieties of trees including olive and carob. The predominance of pine means that the ground is littered with a fragrant layer of pine needles.

Who maintains the woodland?
In the late 1980s, Mizieb was granted to the Hunters’ Federation as a location for bird hunting and remains to this very day under the Federation’s management. One positive outcome of this is that the place is generally well maintained and free of litter, although the signs of hunting activity are there for all to see: ranging from hides to spent cartridges. This arrangement with the hunters means that the place is to be avoided during the open season as there is active shooting taking place. Outside the season, however, it is open and safe. During the cooler months the place is also popular with picnickers, especially during the weekends.

How to get to Mizieb
The best way to reach Mizieb is through the road which bisects it, and which runs perpendicular with and links the Mellieha bypass with the Xemxija-Ghajn Tuffieha road. Where this road reaches Mizieb, there is space for parking with the opportunity of taking either the east or west entrance to the wood.

The east entrance leads all the way to Xemxija. You can either take the middle pathway and walk through the tree cover or alternatively walk around the path ringing the site. Both offer interesting experiences, with the former giving the sensation of walking through a wood and the latter offering beautiful vistas of Wardija Ridge, St. Paul’s Bay, Mistra, Selmun and Mellieha.

The west entrance similarly contains a number of pathways which either take you though the trees or else afford beautiful vistas of the Pwales and Mizieb valleys until the woodland ends in the outskirts of Manikata.

When to visit
I prefer visiting Mizieb between December and April as it is at its most verdant. The light of the low sun penetrating the dense tree cover, the seasonal flora (ranging from various mushroom types after a wet spell to beautiful spring flowers) and the sweet smell of pine resin are all experiences which one does not commonly encounter in Malta.