You are here: Home / A Passion for Fireworks 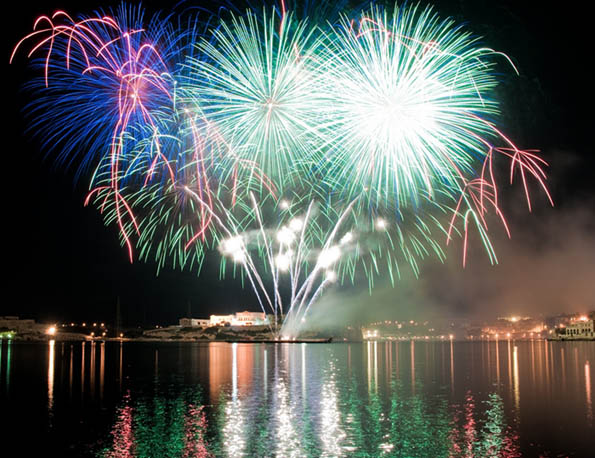 Stars in your eyes, when the festival did get going!

Delays were the order of the day (and night) at the 2009 Malta International Fireworks Festival (1-2 May). The festival should have started the previous night – on the eve of the public holiday of 1 May, but the ship bringing the fireworks came in a day late. One absurd rumour had the ship hijacked by Somali pirates; a perplexing notion since we’re in the middle of the Mediterranean! The delay, whatever the reason, was just a prelude of things to come.

As in previous years, the setting for the 8th Fireworks Festival was Grand Harbour, which separates Valletta from the Three Cities. This is the perfect place to watch the dream-like fireworks. Their bursts of colour illuminate the historical buildings around and reflect off the Mediterranean Sea below.

Kiosks selling tasty and superbly unhealthy food lined the shore near Lascaris Wharf, just below Valletta’s bastions. Music blasted from speakers to edify the people gathered in droves on top of and below the bastions. A green laser beam projected words and shapes onto Fort St. Angelo across the harbour in Birgu (Vittoriosa). While the crowd was sizeable, I felt there were far fewer people this time round; people could actually walk along the shore without the jostle and squeeze of previous years.

There were various categories of firework display judged in the competition, including those for best synchronisation to music; best colour; best shapes; and best petards. Competitors from around the world wooed the judges and public with sparkling magic in the best ‘synchronisation to music’ category. Some 11 Maltese villages competed against each other in the other categories.

What really killed the spirit of fun on both nights were the lengthy delays caused by technical problems; the lengthiest wait must have been 50 minutes or more. An apologetic presenter praised the public for their patience – in between one melodramatic, neo-gothic choir song and another (at the umpteenth Enigma song, I really felt like thrashing the speakers).

While it’s understandable that technical errors occur in events like these, I couldn’t fathom why the fireworks were all set off from the same point. Since the displays were set up in close proximity, sparks from one set of fireworks ended up burning the complex wiring systems of upcoming displays. Doh! It doesn’t take a rocket scientist to realise that might be a problem!

But, with this event a competition, nobody wanted to give up and go home, so frantic and lengthy attempts were made to let off every single firework. Hence, our waiting around on two, quite chilly, evenings for anything up to an hour between displays, with hardly any idea what was going on at times.

Those who stayed till the end made it thanks to a good dose of junk food, good company and a whole load of passion. I was lucky to be standing next to a fireworks enthusiast who explained a bit of the hard work it takes all the year round by dedicated people to produce displays of this quality. He remarked, though, that the best fireworks are kept for the village festas – the highlight of the year for any fireworks enthusiast.

I do hope this festival continues to (really) entertain crowds in the future, though better time keeping, sensible logistics on the set-up, far less waiting between displays and a variety of music will would make it a more pleasant experience.