You are here: Home / Essential Malta: Importing a Car 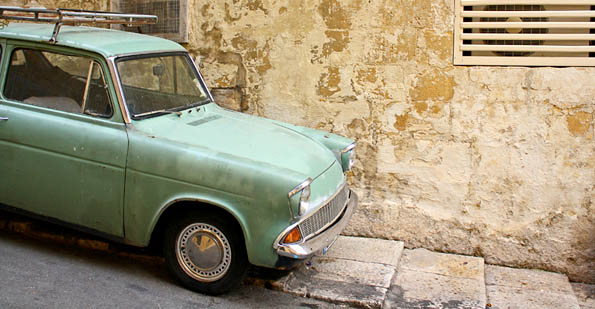 There are a lot of steps to climb if you want to import a car into Malta!

This is probably one of the most difficult topics we’ve covered. We can only guide you, provide some personal insights and give you a feeling for what’s involved. We’ll be building on this article, adding to the body of links here. Your insights will be invaluable too.

[UPDATE 21/01/16:] As an addition to the info below, we’re adding this link to a Transport Malta blog post dealing with the importation of used cars and permits. This may override some info below.

Basic background
If you are foreign and importing a car into Malta to drive it here beyond the six months deemed permissible as a ‘tourist’ stay, then you will have to pay a vehicle registration tax (though may be eligible for an exemption). If you have a Maltese ID card, you will not be able to drive the car beyond the ferry and home, if that, without having it licensed here. With Maltese ID, you cannot claim to be a tourist visiting.

Vehicle Registration Tax
Malta has among the highest registration taxes for most types of vehicles. Some concessions were made in the 2008 budget, effective from 1 January 2009, that reduced the tax on some small- and medium-sized vehicles but increased them for larger ones. The new system was introduced to encourage us to purchase/import more environmentally-friendly cars so the calculations involve the registered value (RV), car length, carbon dioxide emission volumes and particulate matter volumes (diesel only). Also, under the new system comes a useful exemption – private individuals relocating to Malta will be able to bring in a car they’ve owned for two or more years without having to pay vehicle registration tax here. This exemption is limited to one vehicle per person relocating.

Of key interest to those bringing a car into Malta is the Registration Value (RV). The old system depended on a valuation carried out by the Malta Transport Authority and was a somewhat haphazard affair I’ve heard. But now, to quote the official document: “As of 1st January 2009, the valuation system [is] replaced with a new system which will take into account the depreciation rate (and residual value) of a similar vehicle in Malta, and [is] available online. The system [allows] the user to calculate the tax that would be due if the vehicle were to be registered.”

Vehicle registation tax rates have long been a contentious issue, among both local Maltese and incoming residents – the latter often left facing a nasty tax shock when their six months’ temporary vehicle permit (tourist stay period on the vehicle) is up! It can still be the case, when the RV calculations are done, that you face car registration taxes that are higher than the real value of the car. But, since used car prices hold up in Malta (see photo above for how we keep our cars going!), you might end up selling it here and not losing out too much in the long run, depending on vehicle type and its demand.

If you do end up driving a car with foreign plates for several months here, but within your six-month, temporary permit period (which you should get earlier rather than later in your stay!), you might be pulled over by ADT (Malta Transport Authority) officials doing road-side, spot checks. They can be officious.

Procedures
These are quite long and complicated and we’ve some links to help get you through them.
Malta Transport site Registration, Tax & Documentation page gives you a blow by blow list of the procedures and what paperwork you’ll need.
The Malta Chamber for SMEs – the GRTU – has an unofficial guide that makes for an interesting read, and mirrors the official one step by step.
British Expat Forum – Malta has lots of Q&A threads that are worth spending an hour drilling through.

Official Links:
The Malta Transport site has downloadable forms and details of the various, possibly useful, tax exemptions such as for overseas’ students or people taking up fixed-term, contract work in Malta who wish to bring their own car in with them for their stay.
http://www.maltatransport.com/en/

http://www.valuation.vehicleregistration.gov.mt/Car.aspx This is a quick, online calculator of the RV you can expect to pay.

Expat Insights
If expats have friends already here, they know the ropes and often opt to hire or buy in situ in Malta. Average hire car rates, for a family car (Ford Focus) on long-term hire, can be around €10/day.

Here’s one car import tale:
“Bringing the car in was fairly easy as you are given a 6 month visitor’s permit. However, the hassle started once this permit ran out. We were being asked to pay massive duty on the car (I think it was about 60% of the total car value) to get Maltese registration or send it back to the UK. Finally, after many meetings and heated discussions my husband ended up meeting both the finance and transport ministers (eds. note: Malta is small, and if your business has clout or you have connections, it’s possible!….) to get them to agree on an exemption for cars of incoming foreign staff at our firm. This meant we only had to pay a comparatively small fee to get it registered. The ADT seem to have clamped down significantly on foreign cars. Our main issues were: (1) duties and (2) the whole minefield of a procedure for getting the car registered.

Would I do it again? Maybe if laws on duty were relaxed – but at the time? No! It was major hassle and meant we couldn’t drive the car for months on end once the permit had expired. One guy I know in the same firm had his car seized and was told: either pay the duty or put the car on the next ferry out of Malta.

Another person’s experience…
We now have some kind of deal on vehicle registration tax because we have had the car more than 2 yrs and therefore fulfilled another criteria. We paid around €300 to get it registered with ADT, BUT they have our UK plates and logbook – which basically means we can’t sell the car here. Unless of course we pay the import duty, which seems to be assessed also, unofficial word has it, on the state of your car; if it looks a bit bashed up, you are more likely to get a lower rate!”