You are here: Home / Who’s ever been in a karozzin? 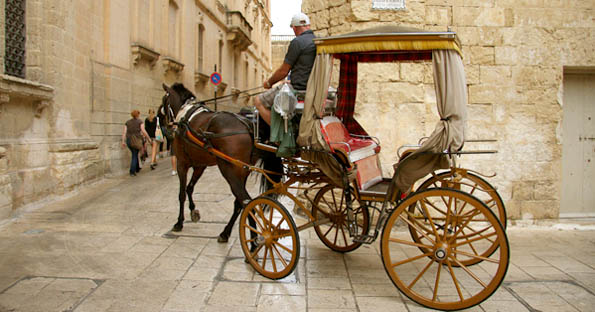 Rainy days and Mondays, perhaps not the best days to tout for rides.

Manoeuvering Maltese roads is bad enough. Our driving skills come close to those of our Italian and Arab neighbours. But what’s even worse is being stuck in a Maltese rush hour jam near Valletta in the vicinity of a karozzin.

Yesterday morning the juxtaposition of old and new rankled. A karozzin driver gabbling into an iPhone, yanking the lead on the horse with his free hand, creates a domino effect of crazy manoeuvres by irate cars with dents, their occupants half-gawping, half running over the entrepreneur and his beast.

I have yet to meet a local who has owned up to having been in a karozzin when sober. In Malta, karozzin drivers’ street cred is almost at a par with our ‘allegedly’ rude bus drivers. It’s a reputation that has been built over some fifty years’ of tourism. Go to Valletta, Mdina, or Rabat, in Gozo, and you will find some naive tourist trying to negotiate a way out of being almost press-ganged into ‘having a ride with the cabbie’ or a ‘tour round the harbour’ or whatever comes out of the cabbies’ mouths. Poet-laureates these guys aren’t. They’re safeguarded as a component of Malta’s tourism, and yet they’re often seen hassling tourists or anyone with fair hair; their horses generally look world weary; and their ‘guiding capabilities’ leave much to be desired from the snippets you hear as they trundle by.

I don’t want to stereotype and tar them all with the same brush. I know every country has its ‘tourism’ artefacts, its ‘living souvenirs’. As far as I’m concerned, there’s nothing quaint about the karozzin. Vienna has its Fiakr – open horse-drawn carriages – that are polished to the hilt and driven by well-turned out men in uniform. A totally different experience, if costly (but our equivalent can be too). Fiakr can pass being described as ‘romantic’; a word that hardly trips off the tongue in relation to Malta’s karozzin, although I know many wedding organisers do add karozzin to the list of bride and groom transport.

So what makes tourists jump into a karozzin in Malta, get fleeced, and then return home to flood Flickr with their pictures?

Or have I got this all wrong?