You are here: Home / Choice Churches to visit in Malta 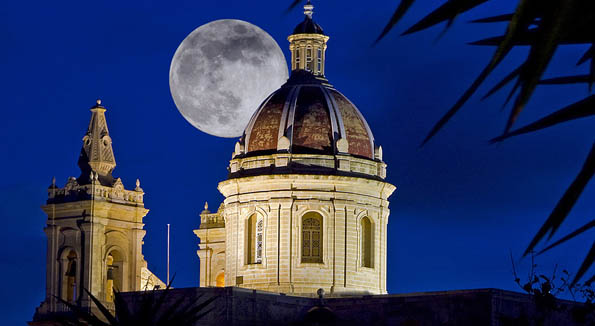 A magical view of a common feature on Malta's skyline.

Most of us in Malta know the saying that there’s a church to visit for every day of the year. We’re not too sure, but it seems like it! From the moment you overfly the islands coming in to land, you’re struck by the number of baroque domes below whether it’s your nth time arriving in Malta or the first.

On Good Fridays, it’s the tradition for people to make a kind of pilgrimage tour of seven, but we’re listing around 10 of our top, all-time, must-sees which range from the celebrity cathedrals to a troglodyte church. Some are here because of the location and views to be had from their portals, while others are noted for the historical, ecclesiastical treasures inside.

Whether you’re a regular Catholic church-goer or not, it’s impossible to miss the pull of Malta’s churches. Churches are big business here, and still actively dominate, not just architecturally, Maltese daily life. A friend once noted when stumbling home from a party at around 5am, that women were thronging out of early mass, and heading straight across the road to the hairdressers – whose business-savvy owner had siezed the opportunity to get a few ‘shampoo and sets’ in before breakfast time!

Locals among us might know this list ‘insideout’, but it’s worth a glance to remind us of gems like the Zabbar Church Sanctuary Museum that we tend to ignore in our sightseeing trips. A lot of these churches make good kids’ outings, believe it or not. St Paul’s Shipwreck in Valletta is so gloomy inside it’s like going into a ghost train ride, and has quite a few relic-type surprises in store.

At the risk of annoying some of the more parochial of us, here are our favourites:

Mosta Dome: So called as it’s is a rotunda church (built in 1860) sporting the fourth largest dome in the world and Malta’s rival to St Peter’s in Rome. It has more claim to fame though – it received a direct hit from a bomb in WWII; the bomb punctured the roof during a mass (you can still see it’s entry point, just about), rolled down an aisle but didn’t explode. A replica of the ‘miracle’ bomb is in a small museum to the back of the church. Feast Day, 15 August, Assumption.

Siggiewi: This rural parish has an imposing church which sits at the top of a vast, L-shaped piazza – also home to two other churches! The church (1693), has an enormous, if slim and steep dome that was added well after its baroque construct designed by Malta’s famed architect Lorenzo Gafa’. The church, dedicated to St Nicholas, houses a Mattia Preti painting. But it’s the whole ambiance – church and peaceful square – that makes the place special. Feast – last weekend in June.

Mgarr: Another rural spot, this time in the ‘wilds’ of north-western Malta, Mgarr has a truly large landmark of a parish church. It’s not old, having been constructed in the early 20th century, but it makes up for lack of history by being the next largest unsupported dome after Mosta’s church. From its courtyard, you have vast open views of the plateaued hills around, and to the coastline. A spot worthy of a traveller’s rest – refreshment courtesy of the bars nearby. Feast – 15 August, Assumption.

St Catherine’s, Valletta: This is an exquisite, baroque chapel that formed part of the Auberge d’Italie, or hostel of the Italian Knights of St John. It has undergone extensive, and loving restoration in recent years, and has taken on a new lease of life as cultural venue, holding regular Sunday and Thursday lunchtime chamber music concerts. There’s no better way to enjoy its delightful interior and atmosphere than over half an hour or so of music. Details from St James Cavalier (opposite). Entry: Euro 5 by donation to the restoration fund.

St John’s Co-Cathedral, Valletta: This masterpiece of two styles – Mannerist exterior and Baroque interior, needs no introduction and is on all visitors’ must-see list. It is quite simply, world heritage in a World Heritage City. Valletta’s father and founder, Grandmaster Jean Parisot de la Valette, lies in its crypt. I find, as a local, I call in it somewhat less these days as it’s become a huge tourist attraction, and requires a ticket. It was the place to find a half hour of solace away from bustle of the shopping streets outside. Dark, cool and calm on the hottest of summer days. Visitor info here.

Ta’ Pinu Basilica, Gozo:A recent addition in comparison to all the baroque on the islands, but well worth the early 20th century effort to build it on this isolated, open spot. Ta’ Pinu is a gigantic basilica given Gozo’s size, and named after the rare, barrel-vaulted 16th century chapel it houses within it. Apparently, two locals at the spot in the late 19th century heard a ‘voice’ calling them to prayer at chapel. The Basilica was later built to become a shrine and place of pilgrimage (hence it size) dedicated to the intercession of Our Lady of Pinu.

Mellieha – Sanctuary of Our Lady: I went to a family wedding in this venerated, old parish church a few years ago, and just thought ‘wow! what an amazing location!’. The church is perched on an escarpment that has wide views over to Mellieha Bay below. It was like a scene from Cinema Paradiso, or some set from any of those famed Italian film-makers, especially with the wedding ceremony in full swing. It’s the former parish church and is built around a truly ancient rock-hewn church. The murals on the underground church date from probably around 3rd century A.D. although legend would have it that St Luke painted them when shipwrecked with St Paul in A.D.60.

Zabbar: The town itself is not on many visitor’s stop-offs, serving mostly as a through-route to the fishing village-resort of Marsascala. Its parish church though is a large baroque affair, but the reason you may wish to call in is the remarkable, eclectic collection housed in its museum, ‘The Zabbar Sanctury Museum’. Opened around 50 years ago, it is still unknown to a lot of Maltese. Which is a shame as it has some odd-ball, rare, quirky, precious, and fascinating exhibits ranging from Sedan chairs to bits of plane fuselage from WWII, as well as a fine collection of maritime votive paintings. Earlier this year, I happened to meet two retired men who work tirelessly as volunteers, keeping the place going. Do visit, and make their day! More info here.

St Paul’s Shipwreck, Valletta This is one of Valletta’s oldest churches and one of its more fascinating. It dates back to 1577 and has an unusually wide nave. It has a dark, gloomy feel inside which becomes its age and its venerated relics – the right wrist bone of the saint, and part of the column on which he was beheaded. These, like the relics in the side chapels of St John’s, always hold a morbid fascination for less easily-scared kids in any visiting party. The church houses some master craftsmanship in the statue of St Paul which was made by Melchiorre Gafa’, brother of Lorenzo Gafa’, Malta’s renowned architect to the Knights.

Mdina Cathedral: This is another must see and do because it’s so easy to fit in as part of a ‘Silent City’ tour. You can get joint entry to the Cathedral and Cathedral Museum (museum open: 09:00-16:30 Mon – Fri. Closed: Sundays and Public Holidays. Tickets: adults €2.33). The cathedral dates back to the late 17th century, but stands on the site of the old Norman cathedral which was destroyed in the 1693 earthquake that devastated the south-eastern corner of Sicily. Here too, it’s said, was the site of the house of the Roman Governor, Publius, whom St Paul converted to Christianity. Remaining from the Norman edifice is the massive altarpiece depiction of the Conversion of St Paul by Italian Knight and painter, Mattia Preti.

Cittadella’ Cathedral: Small but perfectly formed, this cathedral is a mini version of that of Mdina. And little wonder, since it was another baroque affair by Lorenzo Gafa’, the Maltese Architect who designed Mdina Cathedral. Its interest lies more in its ‘strategic position’ up a sweat-breaking, steep slope (summer time visitors be warned!), just inside the fortress’ walls. It is also said to stand on the site of the Roman Temple of Juno, commented on by Cicero in his writings. Kids love the inlaid tombstone floor and gazing up at the trompe l’oeil painting of a dome that was never to be on the outside.