You are here: Home / Carrie Haber: in her own words 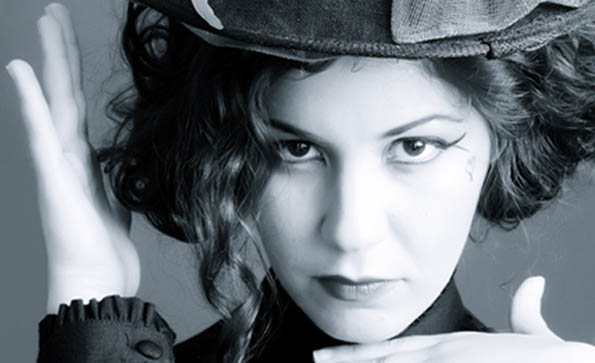 Carrie Haber: all dressed up and going places

The first time I saw Carrie Haber play live was in Merchant Street, during Notte Bianca in 2008. I was just gobsmacked by the energy, the mastery of the piano and the range of that voice. Fast forward to this year and Carrie is now based in London, living her dream, doing what she was born to do. We caught up with her as she prepares for Teatru Unplugged at the Manoel Theatre, Valletta on 27, 28 & 29 November.

When did you know you were musical?
Before I even started playing the piano I had dreams of becoming a ballerina. I used to dance all the time in my living room. This was before I’d even begun going to school. I also remember singing at every birthday party I went to. So I was rather young when people noticed my musicality. And I only realised how special that was when they started to tell me – otherwise I thought everyone could sing!

When did you start to play the piano?
Well, at around age four, my mum gave me a choice. I could either go to my grandmother for piano lessons, or I could go for ballet lessons. It didn’t even take me a second to decide. I wanted ballet lessons! So of course, my mum sent me to piano lessons haha. And I don’t regret it one bit – although I cry every time I watch a ballet. I always wish it were me dancing on that stage.

Who are your mentors in life?
My mum and my grandmother have been mentors for much of my life. They started me off and they influence every move I make. However, lately I’ve also had the help of the wonderful Tony Moore in London who advises me and encourages me constantly. I also have a vocal mentor, and that’s my amazing teacher Line Hilton!

What music did you listen to as a child?
Mainly whatever was on the radio and lots and lots of classical piano music – I never really paid much attention to the radio charts until I was around 11. And by that time I had already started writing my own music. I remember the first CDs I’d ever bought were The Corrs and Hanson. I was so excited to have it! It was their use of harmonies that I found really inspiring. I also loved the fact that they were brothers and sisters. In fact I was hoping my brothers would take up an instrument so that we could form our own band. I had it all planned. Andrew, my youngest brother, would play the drums and Steven, the middle of the 3, would play guitar and sing harmonies. It would have been perfect! Alas that never came to pass.

Who are your major influences in music now?
Well there are quite a few. I tend to look for vocal texture and versatility in the artists I listen to. That’s why I am into Tori Amos, the Dresden Dolls, Gwen Stefani, Goldfrapp, Radiohead, Jeff Buckley, Imogen Heap, Elisa and Regina Spektor just to name a few.

Do you get bugged when people say you’re Malta’s answer to Tori Amos?
Not at all! I understand that people need to make that association in order to relate to my music. And I am honoured to be compared to an artist I hold in such high esteem. Having said that I know my music to be different to hers in many ways, for example, her piano accompaniments tend to be more jazz oriented, whereas mine are more classical. Also, our song structures are very different. In fact, the only thing that makes such a comparison valid is the fact that I tend to use my higher register in a classical way making the texture of our voices sound rather similar. But that’s valid enough for me

How difficult is it to get up and leave the island to follow your dreams in the UK? How did you do it?
Well it would be a lie to say that it is easy. But I have also been very lucky to have help. Tony Moore had been encouraging me for months to go to London for a week here and there and perform at his venues. So I finally took up his offer. I went once for a week, and then again a couple of months later. I then went for a whole month. By then I had decided that I needed to move to London. A month later I had moved! I acted on instinct and even though it was scary, I know that I made the right decision.

I kept asking myself this question: How would I feel in 5 years time knowing that I didn’t take this chance? If I was ok with it, then I would have stayed in Malta. But I wasn’t ok with it. I would have felt guilty and empty knowing that I missed out on an opportunity like that. My life would have been incomplete. And that’s not to say that there weren’t sacrifices to be made, but by comparison, those sacrifices were worth making.

Who are the people who helped you on your journey to where you are now?
There have been many people that eventually led me to this point in my journey. Starting from my mum to my grandmother, my old school friends who’d come to my house every week to listen to some new songs together with my brothers and my dad, Andie Coppini with whom I had my very first studio experience, OzzyLino who believed in me and introduced me to Tom Nash, who in turn introduced me to David Vella and Line Hilton, various musicians and ex-boyfriends along the way and finally Tony Moore. It’s a chain. One person leads to another. But every single person is important in my musical development.

Tell me about your first gig in the UK. Your best one. Your strangest one. Your latest one. The one you’re looking forward to, most.
My first UK gig was very interesting actually. I arrived at Luton Airport and Tony Moore picked me up. He had been invited to perform on a TV programme which was being filmed in Birmingham so I went with him. Once there, the host invited me to perform on the programme too and so my first performance in London was on SKY tv! Straight after that Tony had an interview to give, so again I followed and guess who was being interviewed? None other than Duran Duran! We then drove straight to the next venue in London where I changed in the girls’ toilet for the first of many gigs at the Regal Room. It was an amazing journey already and I had barely been in London 24 hours!

My best gig however is hard to choose. There are a number of them. There was the fundraising event which was held at The Bedford in London in which I was one of many acts including The Feeling. Newton Faulkner was in the audience too! Then there was that time I performed at a school in Copenhagen for around 600 kids! That was awesome! And of course there’s the performance I gave in LA which I enjoyed thoroughly and which lead to many good things.

My strangest and latest gig go hand in hand. Last Monday I performed for an hour to an online audience. There was no one in the room apart from two friends because it was 3pm in the afternoon and everyone was at work. The event was called SOS Rainforest Second Life Concert, supported by Prince Charles. So I was basically performing to a camera which linked to a laptop making it possible for people all around the world to watch! So I had another laptop on the grand piano I was playing and my online audience would send me messages throughout the set. It was strange but pretty awesome!

The next gig which I’m really looking forward to has to be Teatru Unplugged which is being held at the Manoel Theatre in Malta on the 27/28/29 of November!

What’s your favourite place in Malta?
In terms of music venues I’d definitely say the Manoel Theatre. But my favourite hide out is Legligin which is a little wine bar on the street parallel to the Manoel. The owner is so nice and his food is to die for!!

What advice would you give others aspiring to make a career out of music?
I can only speak from my own experience. If your heart isn’t in it, then don’t bother. But if you can’t imagine your life without music, then give it your all! If you love music but it’s not a priority, hold on to it and use it as a therapy to let out your emotions. It’s an excellent release!

The video for ‘Me Oh My’ is a definite departure from your other material. Where was it filmed? Who was involved?
Yes in fact coming to London has allowed me to really express myself. My performance has become a lot bolder and much more theatrical. So “Me Oh My” being such an expressive song was the perfect choice for my first music video. I wanted to let people know that they can no longer expect the obvious from me.
The video was filmed in my grandparents’ hall. The piano is in fact my grandmother’s. Nick Morales and Keith Falzon both filmed and edited the video. Kirsten Holland did my make up, with the help of a friend of mine, Lisa Schembri. HairFactory was kind enough to sponsor me and Sara Falzon volunteered to come and take some pictures as we were filming. My brother Andrew was also on set helping with the music. And what’s more, I was also sponsored by Amrita (foot care and wellness centre) where I got a lovely massage before the shoot. All in all we were a great team!!

What are you working on, right now?
I am writing a lot of songs these days. I’ve been asked to co-write someone’s album here in London. And I am also co-writing with a teenage girl who I believe has enormous potential. On top of that I’ve co-written for Maltese singer Brooke and I am also working on my own material. I will be living out of a suitcase in December since I am flying from London, to Malta at least 3 times and once to Copenhagen in between. I have also been making cards and small drawings which are associated with my musical style. And underneath all of that I am also giving performance workshops in London, voice lessons in London and Malta, and piano lessons in London. Who said being a musician is easy?!

What should we have asked you?
Where can we buy your EP? – go to www.indiestore.com or come to Teatru Unplugged on the 27/28/29 of November where I will be selling hard copies for just a fiver. Meanwhile, if you want to know what the EP sounds like go have a listen on www.myspace.com/carrieonsinging and check out the music video!