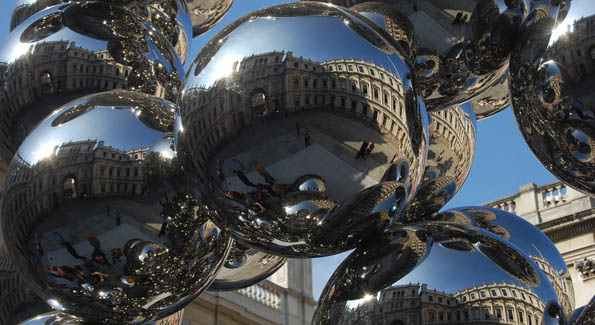 A load of balls, or something much more? Anish Kapoor's Tall Tree & the Eye.

Andrew Borg Cardona, aka Boċċa, is a lawyer, but more renowned as one of Malta’s foremost columnists. He is also a declared bon vivant and has more than a passing interest in art. Here, he asks if Malta has ever stopped to think about art over the past 40 years of nation making, let alone engage in intelligent debate about what makketh good art. Then again, he muses, can anyone define it at all?

Lounging around on beanbags with incense burning and sitar music playing, you’d be forgiven for thinking that the question is one that should possibly be discussed with passion. That’s if it’s the Seventies you’re in and you’re trying to impress the braided and beaded babe who is swimming in and out of focus in the gloom of the lava-lamp.

In the real world, questions like this weren’t really discussed among men, not in Malta in that decade, or the one after, there being issues of greater pith and moment to occupy us, such as whether the morrow would bring some other assault on the national well-being. But sometimes, with enough cheap (and I mean, cheap) wine down the gullet, the notion of what makes good art might get an airing, though given our general level of intellectual aspiration, I don’t recall insights of astounding depths being delivered.

It was probably more a case of “I know what I like and I like what I know”, for all that this was the decade of Warhol and Matson John. And before you start with the “don’t be a moron, Warhol’s 15 minutes and more of fame were in the Sixties”, bear in mind that this is Malta and the Sixties didn’t really get here before the Seventies.

Family circumstances have led me to taking more of an interest in art in the last couple of decades, and I have, on occasion, dared to engage my betters in a discussion of why that particular effort is susceptible to being described as load of pretentious tosh produced by an inveterate tosser, while that one there is an honest piece of work that deserves consideration.

Truth be told, there’s not much out there to guide the neophyte on what can be pointed at with an appreciative frown. On occasion, I’ve read some foreword (thankfully, not written ‘forward’) that causes me to muse on whether the author is taking the piss out us peasants. What I’d like to do is persuade someone of an artistic bent to let me write the intro under an assumed name and see if anyone notices, but that’s a whole ‘nother story.

So, there the question hangs: what makes good art? Good technical execution alone certainly does not, though without it, it’s bad art, just as good ideas badly written constitute bad writing. Is Damien Hirst’s “Shark in Aspic” (or whatever it is) “good art” because some bloated plutocrat is prepared to shell out a couple of million for it? Did anyone seeing the shark for the first time feel the frisson I felt last week, in the courtyard of the Royal Academy, on turning through the gate and seeing Anish Kapoor’s “Tall Tree and the Eye”?

If you can answer those questions, giving reasons (to paraphrase what I remember of A-Level Eng. Lit.) you might approach answering the posted question, but the real question, to be sure, is whether it can, or even should, be answered.