You are here: Home / Observations on a prehistoric statue 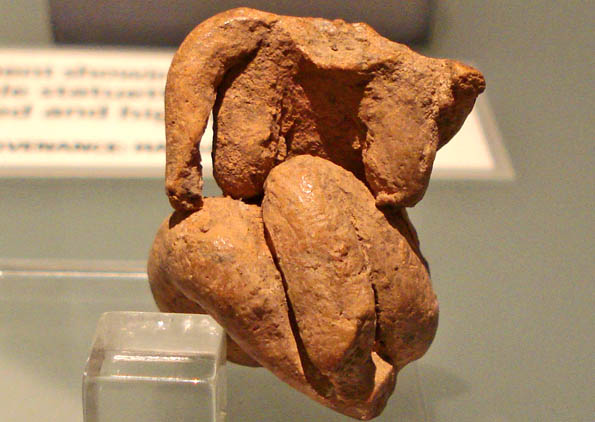 What a work of art is woman. c.5000 years old and still beautiful.

Mention prehistoric man in Malta, and the stereotype image evoked by the many caveman representations brings to mind a picture a loin-cloth clad, bungling figure who huddles around a fire indulging in primitive behaviour.  A picture implying a society which had no time for the finer things in life and which was solely directed at facing the challenges of mere subsistence.

The reality seems to have been far from this.  Maltese prehistoric society spanned over five millennia and has left behind a rich diversity of remains ranging from temples and tools to pottery and statues.  All this implies the existence of a sophisticated society which differs from ours solely in terms of the level of technology rather than in anything else.

Of the many different finds made by archaeologists excavating Maltese prehistoric temples, hypogea and other sites, some of the most remarkable are the ones representing the human form.  The figures range in scale from the giant Tarxien statue which was originally three metres high to ones which are a mere few centimetres in size.  They can be standing, seating or lying and are either carved from limestone or bones or modelled out of clay.

When discussing the human form in Maltese prehistoric archaeology one is faced with yet another stereotype: the derogatory Fat Lady stereotype.  Whereas the accepted notion at present indicates that most statues are of a sexually ambiguous nature, rather than merely female, there are statues whose gender can be clearly distinguished.

Hundreds of these statues and statuettes have been unearthed from the prehistoric sites over the past two hundred years and one shudders to think about the countless others that have been looted over the centuries, when the authorities used to grant license to speculators to hunt for treasure in prehistoric sites. Other finds may still be lying there in unexplored sites which still await proper scientific excavation.

The National Museum of Archaeology in Valletta displays a good cross section of prehistoric human representations in its ground floor prehistoric exhibit.  The statues are beautifully arranged and described.

In spite of the glory associated with the more famous of the prehistoric statues, foremost among which are the Sleeping Lady from the Hal Saflieni Hypogeum and the so-called Venus of Malta found at Hagar Qim, my favourite statuette is the one in the photo above.

The statue is very definitely female and is fashioned out of clay. It is tiny, spanning ten centimetres at best. Although incomplete, and bearing the ravages of time (being circa five thousand years old), it shows a seated female figure.  Its legs are tucked to the right and one of her arms rests on her knee, although broken off below the elbow.

The posture is so alluringly feminine, the craftsmanship superb. Simplistically made from a roll of clay, the statue features all the humanity possible from a representation of its size and scale.  It is so revealing and yet so demure.  It oozes sexuality in an artistic and tasteful way.  And it is at least five thousand years old!  In my opinion it is the sexiest prehistoric representation ever found in Malta.