You are here: Home / The Sea Squill: the first flower of autumn 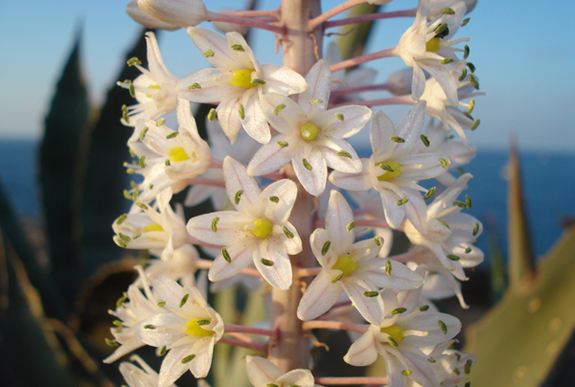 You can tell summer's over when the sea quill flowers

We’re keen to document the fauna and flora of Malta, and this post is a first in our flower series. We’ll be taking month by month plants that characterise the time of year, and are worth looking out for. October’s choice is floral tribute to plant life’s survival skills.

The Maltese summer is characterised by a long period of hot, dry weather during which the countryside is baked into a parched, brown landscape.

To most visitors, this represents a dead, barren environment, given that most of our tourists come from countries in which summer is the time for nature to be at its best. In Malta, the inverse is true, as most of the island’s vegetation goes dormant during the summer months only to reawaken after the return of the first autumn rains.

The first plant to emerge from the summer stupor and embellish the Maltese countryside with flowers is the Sea Squill, Urginea Maritima, also known in Maltese as the basla tal-ghansar. The plant flowers profusely from mid-September to early October in a variety of environments, most notably garrigue.

The tall stalks bearing the plan’s flowers, project a stark contrast to the otherwise brown, and seemingly lifeless background of the sunbaked surface which is yet to revive from the shock of the merciless Maltese summer. From the distance, the stalk does not appear impressive, but close examination will reveal exquisite, wax-like flowers which are both delicate and hardy.

As the Maltese name implies, the plant originates from an onion-like bulb which very often lies half exposed in the shallow soil of the garigue landscape. The plant is known to possess medicinal qualities, foremost amongst which is its reputed use as a stimulant, expectorant and diuretic. But we don’t recommend trying out any sea squill concoctions yourself at home!