You are here: Home / Towns tourists never visit in Malta 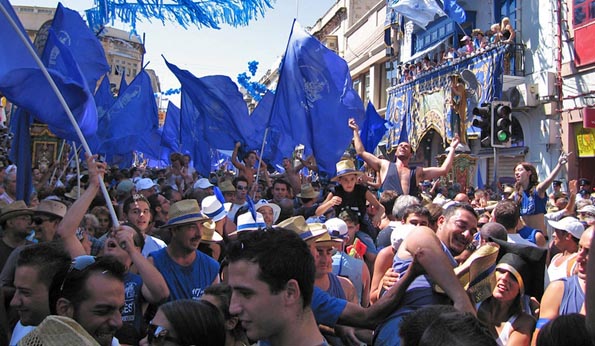 And when the Saints... football or festa crowd? Hamrun's famed for both.

Valletta, Mdina and St. Julian’s might be good enough for the first time visitor, but if you’ve been there done that, you might wish to be slightly more adventurous and explore places most often overlooked by tourists. These are implicitly non-touristy towns, villages and localities because they do not offer the usual history, entertainment and accommodation, but this doesn’t mean they are not fascinating in their own way!

Most visitors stopover at the Ta’ Qali Crafts Village, but the area is far more than just that. It has Malta’s national park, which is a relatively wide open space where you can relax your senses and enjoy a picnic or walk. This place is also popular for big concerts; bands such as Deep Purple, Iron Maiden and Status Quo have all performed their rocking repertoires here.

The ‘tent’, a relatively recent addition to the park’s infrastructure (next to the National Stadium) is Malta’s largest roofed venue and houses everything from bands to the Xmas panto and trade fairs. There’s also an amphitheatre for smaller production, where you might happen to find something interesting going on. Finally, there are also the Malta Aviation Museum and a motor sport association at designated areas within the park for enthusiasts of such activities.

There is nothing spectacular to be found in these places, but that’s the point of going to them. This is real life in urban Malta, and you get to see and do your share of shopping, gossiping and time-biding in general. You might wish to buy some legendary Qormi bread from one of its many family-run bakeries, or go for a short walk through Spencer Hill at Marsa until you reach Hamrun, where you can have something to eat at one of its cheap and cheerful restaurants such as Tivoli, Coffee Republic or Elia. Coming up is the Qormi Bread Festival that takes place 12 September and celebrates the town’s history as Malta’s chief milling and bread-making place since the time of the Knights.

Hamrun is a late 19th century dockland overspill town, built just in land to serve the nearby docks. It does rustle up some decent, cheap eateries, (all pretty earthy, but honest), as well as some useful shops, such as those making and selling cane hassiras to hang over windows to shut out the harsh sun. It has two main claims to fame: its football club, Hamrun Spartans; and its town festa, in honour of San Gejtanu, on 7th August. The festa is a massive street party, often pretty rowdy and notable for its bouts of drunkenness and disorderliness. Hamrun’s feast days are not for the fainthearted.

Marsa is famed for three things: its massive gyratory system (best avoided at rush hour as cars drift haphazardly across its four lanes); the Marsa Race Course which holds trotting races (French style) and sports a rather interesting crowd of locals; and the Marsa Club, a left-over from colonial times, which has long been the place to be seen all summer long by the ‘in’ crowd’, has Malta’s only golf course, as well as pools and various other facilities.

This is a quieter version of Hamrun, but more spacey and less noisy. Stop near the 17th Century Wignacourt aqueduct if you’re reaching this place with public transport and head to Romeo Romano gardens. You can walk through it, until you reach the other side of the garden and end up near the old Santa Venera chapel. This was the original parish church before a bigger one was built and from where this small town got its name originally.

Birkirara is one of the largest towns of the island, and apart from half a dozen churches which one might be inclined to pay a visit to, one could also try to have a glimpse at the Ta’ Ganu Windmill, which is one of the very few windmills built early in the eighteenth century still in existence.

However, you might end this excursion by visiting the Old Railway Station in Birkirkara, where trains used to transport commuters from this station to Valletta in the 19th century up to some decades ago. It has now been transformed into public gardens where you can linger in some greenery despite the urban setting all around, and try to image how busy this place was some one hundred years ago.