You are here: Home / Ghajn Tuffieha, a beach trip for the fit 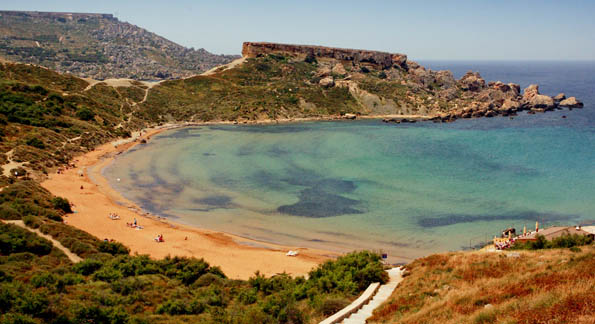 Just next to Golden Bay is Ghajn Tuffieha Bay (also known as Riviera) – which has always been my preferred of the two. The fact that there is a quite steep flight of steps to descend to get to the beach means that the location doesn’t attract the same volume of people as Golden Bay. However, since Ghajn Tuffieha is a lot smaller, in peak summer it gets crowded that much quicker. I also have the impression that the sandy area of the beach has shrunk considerably over the past few years, with the constant pounding of the waves making it even smaller than it was. In rougher weather, with larger waves, you’ll be hard pushed to find much sand at all!

Pros: Location-wise, I consider this to be the most beautiful sandy beach on the island of Malta (Gozo has my other favourite sandy beach, Ramla Bay). The fact that it is slightly less accessible gives the beach a particularly natural atmosphere. The Gaia Foundation runs the hillside behind as a ‘national park’ and they have made efforts to stop erosion by planing tamarisk trees and samphire. A derelict hotel perched on a cliff overlooking the beach adds to the beach’s more secluded atmosphere of the area. On less hot days, it is lovely to hike around the cliffs surrounding the bay and, in spring, the beach is surrounded by flowers and greenery which, sadly, all but dries up in the hot summer months. A watch tower from the time of the Knights stands on a cliff at one end of the bay; and a fascinating rock formation on the other. A walk further inside the beach towards the rocky section can provide some (relative) privacy which is hard to find on Maltese sandy beaches in summer. An ideal place to take a book to, lie down on the sand in, and just relax.

Cons: The undercurrents in this beach can be extremely strong. Therefore it is not advisable to swim here when the sea is rough. Some people have ignored this in the past and a few have even lost their lives. There is a flag system now, giving various info on swimming conditions, and a string of buoys and lifelines out in the bay. But unlike at Golden Bay, there are no lifeguards on duty. Then there are those STEPS! I know many people hate them (especially on the way back after a day at the beach). The sandy space on the beach is rather small. It is not the most suitable of beaches if you are accompanied by small children. You also have stones to negotiate to enter the water, and a few nasty underwater rock. So keep eyes peeled, especially with kids in tow. There is just one (largish) kiosk on the beach with patio seating, which is good for those looking for something a bit less intrusive. Those looking for more action, music and fun should probably look elsewhere.

Verdict: Good for those fit and active enough to walk down the steps to get to the beach! Ideal for couples seeking some seclusion; not ideal for families with young kids. Great for late afternoon-evening swims, BBQs, and sundown -so photographers, get that camera ready!

Map: it’s the middle bay on the map.