Just under a month ago, Malta Inside Out chanced upon A Space Boy Dream at the Malta Comic Convention. We were so taken by the local comic strip artists’ talent and dedication to their creation, that we prised them out from behind their digital pens and screens, and pens and paper, to reveal a bit about themselves and their fictional character ‘Vincent’, who is taking on cult status.

A Space Boy Dream is a comic created by Mark Scicluna and Moira Zahra. Both are artists and lecturers at the Malta College of Art, Science & Technology (MCAST); Mark is a published illustrator and  Moira an illustrator and motion digital artist. Moira and Mark grew up with the rise of cable television in Malta and were of the ‘Cartoon Network’ and PlayStation 1 generation. Both these platforms’ content were hugely influential in forming their later artistic styles and ambitions.

Their collaborative work, a weekly comic strip, follows 23-year-old Vincent and his mundane life on Malta as he struggles to make it big as a fine artist. The comic is a light-hearted satire on hipster culture, in which the artists poke fun at themselves and similarly-minded creatives around them.

You can find the comic on their site here, and updates on their facebook page. Here’s our interview, with Moira as the duo’s spokesperson. We’re now avid followers of Space Boy Vincent!

How did you start out? 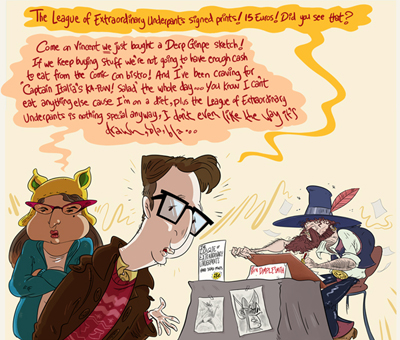 We are both lecturers at MCAST art and design. Mark teaches graphics mostly focusing on the illustration part and sequence imagery. I teach digital arts and  & interactive design modules amongst others. Mark also does the caricatures for MaltaToday and several commissioned illustration work. We both do freelance work, we just developed this years identity for ‘L-Ghanja tal-Poplu’.  I concentrate more on motion digital art; as example of this is my latest project was developing a concept & animation for Carrie Haber’s new music video.

Mark has been creating short comics since he was a child; he even did some strips for ‘Saghtar’. His characters were based on cartoons and game characters but were also given his own twist. I too have been drawing since she was a kid. Initially only interested in the female figure, whether Disney princesses or female game characters, I moved on to drawing sketchy interior spaces and surreal abstract digital pieces influenced by psychedelia and street style illustration. Mark’s work also developed into something more intricate, surreal and largely influenced by UPA style (50s style cartoons).

Something that we had in common was the various ‘Easter eggs’ that we included into our characters and backgrounds, as well as the satirical fun in our illustrations, so it made sense to make a project together. Our first collaborative artwork was about  a family in the 90s. We then started drawing some sketches involving ‘the art crowd’; that is the art clique that we find at every local exhibition, and this is what gave us the idea of making fun of local creatives in particular.

How was the idea of Space Boy Dream born? 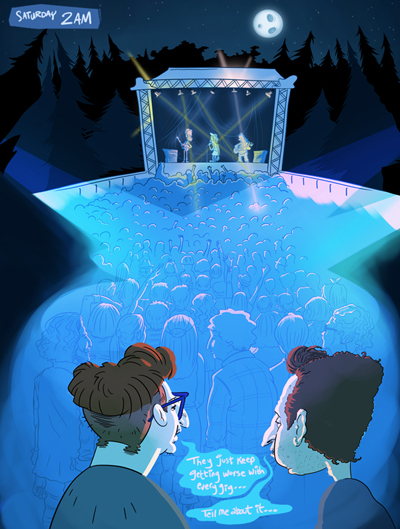 We wanted to make a webcomic but we didn’t have a specific subject.  It seemed to be a bit of a cliche’ to make a comic on hipsters; the trend had been there for some time and some might say it’s dying out, but what is considered to be ‘hipster’ is still very much around us, in fact it has taken over the commercial world completely (celebrities dress like ‘hipters’ so what is a hipster after all?).

Anyway, we were discussing the subject of hipsters and how hipsters dislike other hipsters (Mark made a poster that read ‘Kemm hu hipster dak il-hipster’ at work) and so rather than a comic about hipsters, we wanted to make a comic about a typical local ‘hipster’ who hates hipsters, and we came up with Vincent.  Although Vincent is a ‘hipster’ he’s living in the now, so we don’t know what’s going to happen to him, I guess he’ll evolve with the trends.

Our characters are based on real people from the local ‘hip’ community (with a twist of course). We feel that characters are more authentic when they are based on real people.The main inspiration for Vincent’s character is the general Internet crowd plus the trendy mentality of a Maltese-hating Maltese. This is a common thing amongst youngsters, especially creatives like Vincent, so naturally he feels that if he leaves Malta all his problems will be solved.

Vincent is disillusional, a dreamer, a product of a generation that believes that if they try hard enough they can do whatever they want, and become whoever they want. He is in part us, our friends, the students we teach, people we know online, but not the successful kind. Vincent does get lucky but only rarely; he’s got a bad aura because he’s so pessimistic and passive. He has parents who don’t understand him, a stupid dog, a gamer best friend, and a crush on a girl who already has a boyfriend.

What is the response to cartoon art in Malta? Has it been easy having it recognised? 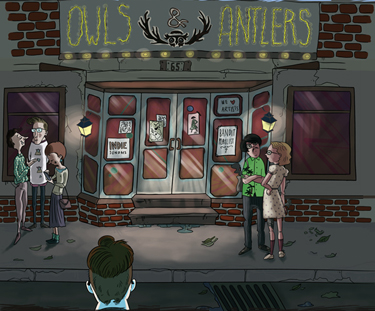 When doing my masters in digital art, I had the chance to study modular narratives with particular focus on the need for ‘reality’ in today’s world. I guess this was one of my reasons for wanting to create a comic that is happening ‘now’ and that is based on what is real, rather than being fantastical. Mark is a caricature artist and is constantly mocking local characteristics.

The comic-con in early December was great, we had a lot of fun, but in terms of style we felt a bit disconnected from most artists who drew superheroes, zombies and vampires. These artists of course attracted a bigger audience because they offer more details in their drawings and familiar characters. We both enjoy drawing details however it’s difficult when doing a weekly comic. We feel that in order to have a character that feels ‘real’ requires at least a weekly comic so this takes priority over creating an intricate background.

Where do you want to take the Vincent story? How do you see it developing?

At the comic con we tried a short frame-by-frame animation experiment (by animator Christ Scicluna, also a student of ours). Most of our visitors expressed that Vincent should be translated into an animation, however this takes time. We’re thinking of printing the comic in the coming months as well.

We don’t know where the story is going. We write and draw the comic every week (we have no back logs) depending on what’s happening at the time. This also gives us a chance to experiment with transmedia, to give people a chance to interact with the comic and have a say in the story. In one of our strips, we invited people to comment on Vincent’s profile picture. Once we had the comments, we developed our story from there. We don’t know where it’s going. Vincent is a product of now, we can’t decide our stories from way back.

What feedback do you get – any memorable moments? Either at live events like Comic-Con or online?

We exhibited a figure of Vincent* at the Comic Con; this was a huge attention grabber, we even got our portfolios reviewed by ‘Scuola Del Fumetto, Palermo’ who urged us to animate the comic. So far the feedback has been largely positive.

The greatest thing is seeing people that are really into the story, asking what is going to happen to Vincent, and recalling his past shenanigans.

For more info on the creators and their comic ‘hero’, see:

*Model of Vincent by sculptor Štefan Priehyba; glasses for the figure by jeweler & lecturer Paolo Giordanella.