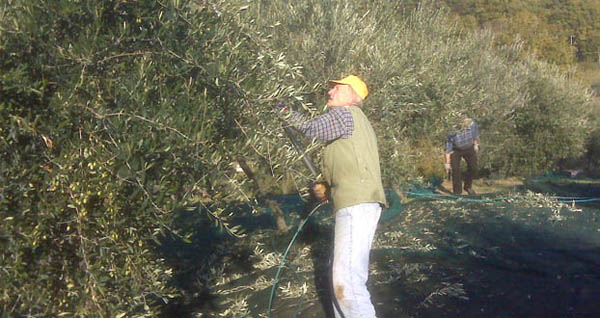 Ivano, at 73, is a past master at the olive harvest! We’re but newcomers …

This last weekend saw an important diary date for a Gozitan couple. The Umbrian olive oil they’ve overseen from tree to bottle in one mad-dash, 24-hour harvest has just arrived in Malta, all ready for home tables and select restaurateurs. And ready too for those Christmas hampers!

I suppose the nearest analogy to this Umbrian oil reaching the market here in Malta would be the celebrations held to herald the arrival of a good Beaujolais nouveau. Olives are a passion for Joseph and Elsie Xuereb, and around mid-November each year, they make a pilgrimage to ‘La Poiana’ agricola in Umbria, near Terni, to assist Italian friends with a select and rather special harvest which produces three connoisseur olive variety (monocultivar or single) oils and one more general use blend. This is their story, and a glimpse into the oil aficionado’s world; increasingly in Malta, we’re asking for oils by variety, just as we do our wines and thanks to impassioned individuals and specialist importers, we can now find oils with just the right taste – peppery, fruity and more – to treat our menus.

Helping out, or so we try!

A few more bends on the road and we get to La Poiana. Having just turned off the San Gemini exit on the A1 Roma-Firenze, we were eager to arrive for our annual appointment with Lanfranco and Diana to help out with the olive harvest, and meet neighbours and friends at the barbecue lunch they organise to celebrate a successful harvest, thank everyone who helps out and catch up with friends.

Having driven for what seemed like an eternity in driving rain, a hot coffee in the kitchen was more than welcome, and the smells emanating from the stove made the discomfort of the journey a distant memory almost immediately. A quick change and soon we were at table. Affetati, crostini, coratella, trippa and guanciale for starters, pappardelle al ragu’ di cinghiale for the primo followed by fegatella, costolette and spiedini; a feast indeed to kick off the congenial mood that is part and parcel of the olive harvest.

An early night is difficult in households like these, but early it had to be with the morning’s work beckoning. Mario Rinalducci heads a team of ten pickers, some on their first season, others hardened by decades of experience – Ivano is 73! We like to think we’re helping out, but, as with some keen neighbours, we are looked at with more than a little amusement by the pickers. For the second year running La Poiana is picking the three olive varieties – Moraiolo, Frantoio and Leccino – separately. Single-olive variety oils, or monocultivars, are highly sought after by connoisseurs and Umbrian olive oil is considered to be right up there among the finest worldwide. 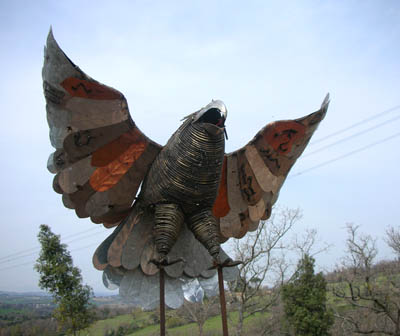 The Buzzard, ‘La Poiana’, watching over this year’s harvest

The picking takes longer, given the separation of the varieties, but the prospect of a sumptuous lunch being prepared by the ladies is enough to spur everyone on. No rest until the last olive is picked. Every cut of meat imaginable is on the barbecue and the potatoes are roasting in the wood-fired oven. The smell of searing flesh is tempered with that of the rosemary and thyme. The tables are being set in the barn. Lanfranco supervises the whole operation, but it is Diana who makes it happen. The neighbours contribute – vegetables, bruschetta and wine, as well as a limoncello and forest-fruit liqueur.

Finally, we are summoned. Among the guests is a couple who have recently moved ‘next door’; Maurizio, who lives closest and helps out throughout the year with his heavy machinery, and Rino, the horticulturist. Walter Coccetta, the eminent artist, honours us with his presence. Roberto, the accountant, arrives late. A long and noisy feast ensues and as coffee and stronger stuff are served, final preparations to move to the press are taken in hand.

At the Frantoio, Massimo supervises the weighing of the cases – so many quintali of this, so many of that. Our session has been pre-booked and around 10pm the first oil begins to trickle out. Not being able to resist, we taste: the pepperiness is overwhelming, but the result is what everyone has been waiting for. Compliments all round!

The season has been quite dry and Lanfranco explains that this year’s harvest will be poorer than last year’s. However, the rocky, granite-laden soil and the tender loving care the trees are given bestow on Umbrian olive oil its unique character. The yield per hectare is scant and the resa per quintale is particularly low – the moraiolo and frantoio about 13%, and the leccino only 11% -but the fresh oil emanating from the press at Massimo Palmadori’s frantoio in Portaria is so fragrant it is almost intoxicating

After such a long lunch, the hunks of bread dunked in the fresh oil pass for dinner. After such a long day, sheer exhaustion makes bed the priority. The following day, we bottle some samples to take home – no one can wait for the packaged product to arrive in Malta, some two weeks later. The new oil is as eagerly anticipated as nouveau wine. The turnaround time from picking to bottling and delivery is kept at an absolute minimum. This makes sure La Poiana oils are among the freshest one can get.

Where to find La Poiana

Around mid-November, the packaged goods are delivered – just in time for Christmas, of course, but they’re a splendid complement to menus throughout the coming year, before next season’s harvest sets in and we return to La Poiana!

La Poiana is available in Malta from:

Philippe Martinet fine wines in Tower Road Sliema,
Frank’s in The Plaza, and Mosta.
Abraham’s supplies in Gozo.
And also on tables at Patrick’s Tmun in Victoria and Boathouse in Xlendi, in Gozo.