You are here: Home / Events & Festas / Runway Malta – for creators not followers of fashion

A runaway success: Runway Malta back for its second edition on 10 March

See end of article for details.

Showcasing a collection of designers from all over the world, Runway Malta is a collaboration of fashion, art, design and a launch-pad for new local designers wanting to make it abroad. Following its success in 2011, Runway Malta is now back in full force for the spring-summer season on 10 March.

Set to a backdrop of traditional Maltese landscape at Montekristo Estate, Runway Malta describes itself as the only full night international fashion event on the island. For a night, the venue is transformed into a catwalk theatre, exhibition hall, entertainment area and dancefloor. The night is broken up into hourly shows in the giant auditorium, while local businesses and labels put on exhibitions, installations, competitions and presentations in the entrance hall in between shows. 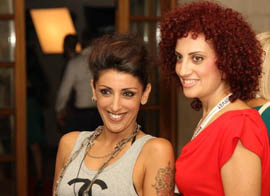 The event is the brainchild of Shideh Olafsson,  an energetic New Zealander who has had all things fashion world in her blood since her mid teens.  Malta Insideout met up with her late last autumn in Mint cafe’ (run by a couple from the antipodes and a regular hang-out for expats from all over), just before she moved to Spain. Shideh started out in her teens as editor of a streetwise fashion and lifestyle magazine in New Zealand and then moved on to graphic design and fashion PR in Australia. By mid-late twenties, Shideh had set up her own fashion PR firm managing upward of 21 labels.  Then Europe called. Her husband, originally from Iceland, wanted to move back a bit nearer his folks, but stop short of northern European climates. Malta ended up on their radar.

Two plus years on the islands and Shideh’s energy spawned Runway, and a very successful boutique fashion model agency, SO Management.  Shideh is not however the kind of person to be a ‘slave’ to fashion.  She wants to make a creative mark on the industry true to her streetwise fashion roots.  “I am always fascinated by what’s out there, on the street. The raw.  There are kids out there dressing their way, and it’s that talent that inspires me to promote.”

Even she says she wasn’t too sure that Malta was ready for a different take on how to present the fashion scene. “The public was so taken aback by this Fashion Week-style set-up last season, that the demand for a continuation became too huge for me (although now in Spain), Alison Gauci my co-organiser and others in the Runway Malta team to ignore. Last season was kind of a trial, so to speak. We didn’t know how the venue was going to work and weren’t sure about the layout of things. And we weren’t  sure either that the public would be into an entire day/night of shows like abroad, so it was all a bit of guessing going on,” says Shideh.

This season, the line-up has its stars. The grand master of latex and rubber, high end designer William Wilde from the UK (yes, the one who designed Rihanna’s S&M Video outfits) will be showing as the big finale at the end of the night. His collections are not only controversial, but have a great sense of rock n roll and femininity to them as well. His other accolades have included designing for Daisy Lowe, Paloma Faith and Tori Amos!

The second international designer is from far away and making a special trip to Malta specifically for this season’s Runway. New Zealand designer, Turet Knuerfermann (tk store) has been at the top of the industry for years and is one of the most successful young designers to ever come out of that part of the world.

¨This is a very big deal for me, personally. Being a New Zealander, I am totally honoured that someone this talented would choose to join our catwalk in Malta and show the Maltese how design is done in Australasia as opposed to in Europe¨, Says Shideh Olafsson.

Lastly, but definitely not least, the third international to join the bill is young menswear designer, Marius Op t´ Eynde who has won a host of awards under his belt from the Netherlands and Belgium. He has just completed an internship at Alexander McQueen which taught him the most important fundamentals of extraordinary fashion design.

Alongside these very talented independent designers will also be world high-end high-street heavyweight, French Connection UK. ¨It is one thing to bring fresh new designers to the catwalk¨, says Runway joint-organiser Alison Gauci, ¨but it´s also very important to pay homage to the long-lasting labels who have kept the wheel turning.

Runway Malta, hand in hand with Valletta 2018, the entity driving Malta’s European Capital of Culture Candidacy for 2018, has put together a New Designer´s Competition to entice young designers. Becoming a candidate for the European Capital of Culture for 2018 has opened the door to Valletta´s cultural hub and has allowed for artistic relationships to be built between Malta and other European cities.

Because of this, V18 and Runway Malta came up with a way to team up with another candidate city – Maastricht in the Netherlands – to give a Maltese designer an opportunity to show at the inaugural Fashionclash Maastricht Festival held in June.

Applications are open to any new designer in Malta to come up with three outfits using any material they like. It does not have to be traditional fashion, but can incorporate metals, textiles, plastic or any other material to create a form of wearable art. From all of the applications received, the judges will then pick five finalists to show on the catwalk at Runway Malta. Then one winner is decided and they will go on an all-expense paid trip to show their full collection at Fashionclash Maastricht in June 2012.

¨Fashionclash has been going for three years now. We have always incorporated fashion, art and textile design into our shows and opened it up to artists from all around the world. We have never had an application from a Maltese designer before and we can´t wait to see what kind of young talented treasure we will find through this initiative.¨ Says one of the three Fashionclash Maastricht organisers, Nawie Kuiper.

Win a Ticket to Runway!

Here is the gist of the giveaway:
– TWO free tickets to Runway on 10th March at Montekristo Estates.
– Leave a comment on this post anytime up to midnight on Thursday, March 1st (CET time).
– One entry per person, no anonymous comments (email required to submit comment, and please sign some name or initial that will show on the comment publicly)
– The winners will be picked randomly and notified by email by end Friday 2nd March.

Tickets to collect on the door on the night. (Remember, the first 100 guests receive that goody-bag as well!)