You are here: Home / Events & Festas / Of Men & Saints: getting ready for a Maltese festa

In Malta, school children study Malta’s prehistory and marvel at the energy, passion, resourcefulness, skill and sheer hard work that went into building the temples of Hagar Qim, Mnajdra or Ggantija. These mysterious peoples of prehistory somehow mobilised themselves, en masse, to construct feats of engineering; megalithic temples in worship of a cult.

Some answers to how they joined forces to achieve this, driven by a common belief and passion, lie in Maltese society today. They are staring us in the face – in the phenomenon of the yearly village festa. My village is in thick of its festa preparations. Each day this week, as the main feast weekend nears, we’ve seen cranes, pick-up vans and fork-lifts trucks, more usually found at home in warehouses, deployed in putting up flags, band stands, pedestals, plinths, statues, poles and more.

Teams of men, the band club members and vast armies of community volunteers (who seem able to get a lot of time off work!) are now working flat out, from dawn to dusk. I’ve seen this played out for 17 years, and incredibly, each year the festa gets bigger, longer and more extravagant. The preparation isn’t last minute though; all year long, a core team is busy gilding, crafting, painting the ornaments ready for the next festa. It’s a non-stop labour of love.

As a long-term foreign resident, I am still an outsider looking in on all of this. I still ask myself how this mass mobilisation happens; I still marvel at it just as I do at the labour and blind belief that must have brought the temples into being several thousand years before. 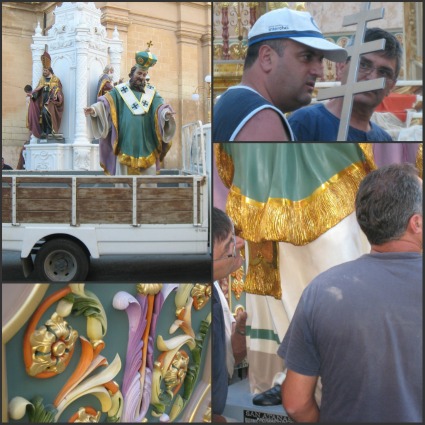 Heave-ho and up he rises! Saint Atanajsu into place