Here, Victor Calleja gets to grips with the fervour and fever of Easter in Malta and its various public, religious displays.

Anthropologists, sociologists and various other experts have written about it seriously and studiously and treated the matter extensively. So who am I to dare to dip into the realm of religious customs in Malta and add my commentary?

Preamble aside, I’ll give a few thoughts of a Maltese man who has lived most of his life on this rock. At around 50 something, I’ve enjoyed quite a bit of the religious fun and revelry that goes on here. I have to admit, I have seen some odd happenings in the name of religion and its attendant helper – conservatism. But, although not always saintly, they are on the whole quite endearing and just harmless fun for all their exuberance and ‘in-your-face’ appeal. 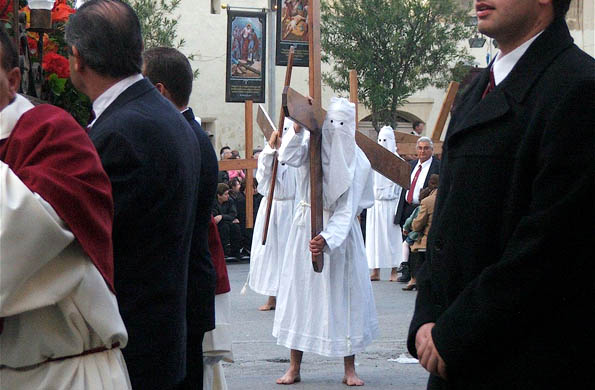 In Penance or in gratitude? Each has his cross to bear.

Malta, if you haven’t yet realised, is rather religious. We have enough beautiful churches and chapels and cathedrals and basilicas to accommodate what seems like half the population of the universe. Most of us are regular churchgoers and we congregate at many religious manifestations in our thousands, making enough noise to sound like millions. We seem to relish noise so much that many people visiting Malta think we’re on the verge of murdering each other at times on account of the decibels our voices reach.

The village feast, where a saint or deity is celebrated as the best champion in the heavens is a gloriously garish fest that’s colourful and fun-filled. You find the local youth singing and gyrating to the band which accompanies the saint as it’s held high in triumph; and then you have flagons of wine, beer and all sorts of spirits downed in awe and then an ecstatic frenzy. All in support of a heavenly saint who could have been, for all we know, a terrific ascetic who would never downed a drop of anything more inebriating than Shandy, had it existed back in the days of saints and martyrs.

And then food, glorious foods in calorific and soporific quantities are produced and feasted upon. During the actual feast day the village rocks with a loud, never-ending, firing of fear-inducing petards and yet more pulsating, petrifying petards. The night culminates in a glorious but even more ear-blasting noise as the fireworks display is let off. This fanfare of fireworks plays a major part in heralding the saint back into the church. This, I imagine, is a sort of symbolic entry into the heavens.

It is at this time of year that we have even more shows of deep religious fervour. One of the high points of the revelry happens early on Easter morning when some churches in Malta celebrate the Ascension by hoisting high a statue of the risen Christ. The Birgu (Vittoriosa) one is a remarkable sight to behold; the carriers of the statue lift it up and run uphill from the church to the main square in a short, sharp burst of energy as they buckle under the statue’s weight. It sways rather unceremoniously en route. A band adds to the solemn tone of it all to make it sound and seem as if the triumphant Christ has run up all the way from his earthly tomb to his perfectly quiet piece of heaven, far from the religious manifestations in Malta. Which we, for now, are thankfully destined to live among.