You are here: Home / People & Opinion / The Long March for Charity

A young restaurant manager, Brandon Pace, is about to spend 27 hours walking around Malta non stop. Why? Because galvanised into action by supportive friends, he walked 24-hours non stop last year, raising some €3,000 for charities in Ethiopia. But calling his charitable deed a sponsored walk is to sell it short. Brandon and two friends completed what he describes as an ‘immense endurance challenge’. But as he reminds us, his is only for a day and a bit, while the people he is raising money for spend a lifetime under endurance. 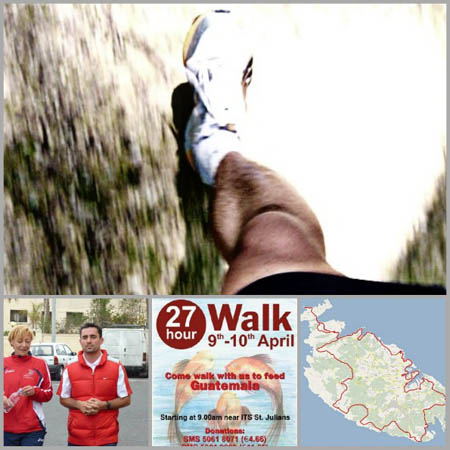 Non stop for charity: Brandon Pace and his 27-hour round Malta walk

“I think those last 20km were the most testing thing I’ve ever done in my life. It was almost an out-of-body experience completing the last leg of the course,” Brandon says. He trained of course, but says nothing prepares you for the mental stamina required. Second time around, he has set himself an extra three hours of walking to make up for it!

On 9-10 April he sets off on his 27-hour non-stop walk. It’s longer than running three consecutive full marathons. “We have been training very hard to ensure that we are physically and mentally fit for this challenge. The money raised this year will go to setting up a fish farm in Guatemala as well as help create jobs. The project will have long term benefit as a sustainable, and economically viable project that will help the community help itself.

“The public can walk with us, joining in for €5 at a pace and distance they want. One couple last year walked only around 15 km with us, but donated €500,” he says. “So far everything is going great and the feedback we’ve had is overwhelming but our aim at the end of the day is to raise a substantial amount of money and that is what we need to make a difference,” he comments. Brandon’s dedication is infectious. So do get out there and support him and friends, and sponsor and donate.

Walk Details
The walk starts at 9am near ITS in St. Julians and will end…27 hours later back at ITS covering an approximate distance of 130km! Facebook updates will be show the walkers location every 30 mins.

Photos: walking leg courtesy thebmag; other photos courtesy of Brandon Pace at the 27-hour walk (left bottom: Lara Gerada, who is the main protagonist in liaising with Guatemala on the project, with Brandon Pace).