In Malta, nicknames live on, down the generations

There’s not much diversity in surnames here in Malta and a mere handful go to making up most of island’s phone directory. We’re asked time and again by foreign visitors about this repetition of Maltese family names. So, at Malta Inside Out, we decided to explain the naming game, thanks to guest blogger, Nanette Johnson, aka Ms Gourmet, of www.gourmetworrier.com.

Nanette lives in Melbourne, Australia, but is the daughter of a Gozitan father and a Maltese mother who emigrated in the ’60s. She relates a warming tale, told to her on holiday ‘back home’ in Gozo, of how the Maltese get around the same-name phenomenon by inventing a wonderful system of nicknames! To get the full story, you’ll need to know that her blog has a bumblebee and honeycomb symbol on it.

How it came to Bee
My father is originally from the island of Gozo, Malta’s sister island. Gozo is a tiny island and it is predominantly Catholic. Traditionally parents would name their children after Saints – Mary, Marija, Joseph, Josephine, Nazarene, Victoria, Victor, Anthony, Antoinette, Francis, Francesca et al. As you can imagine there are a whole lot of Joe’s & Mary’s running around on that tiny island.

One of the ways they overcame this name overlap was to give families nicknames. So Joe Bonello would be referred to as Joe tal Korkos (which is in fact my paternal grandfathers family nickname). Don’t ask me what ‘Korkos’ means, or to translate it into English or how it came to be. I have asked my relatives this at least a hundred times and every time I am met with that look that says ‘what island are you on?

My paternal grandmother’s family nickname is ‘zunzana’ and thankfully this nickname is translatable. Hence, one of its meanings is ‘bumblebee’. In Maltese, a bee is also a ‘nahla’ but ‘zunzana’ is onomatopoeic in that it refers to insects that make that ‘znznzn’ noise and that sting. When I was in Gozo recently I asked my aunt if she knew how the ‘zunzana’ nickname evolved. Was it because the women on my grandmother’s side of the family had a sting to them? Or did they have a sharp, unforgiving edge about them?

Again I got that blank stare that said ‘what planet where you raised on child’?

And so my aunt then explained that the name ‘zunzana’ – the ‘bumblebee’ is symbolic for cleverness, industry and life. My great grandmother, grandmother, great aunts and aunts not only raised huge families and ran households and estates, but they also tended to the fields, were great mothers and homemakers and brilliant cooks. In essence they were immortal.

I knew instantly that I wanted the bumblebee to be a part of my blog, Gourmet Worrier. Thus, the humble little bumblebee is my subtle tribute to all of the wonderful women in my family who were great mothers, creative souls and brilliant cooks! 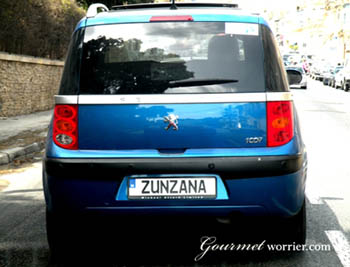 But, is it wise to know whose car it is?