You are here: Home / Film & Photography / Malta through the lens: the Richard Ellis photographic archive

Malta houses a massive archive of early photography – the Richard Ellis archives – that gives us an astonishing insight into life on the Islands from 1862 to the early C20th. It’s largely the life’s work of one man, Richard Ellis, an Englishman who arrived by chance in Malta with his adoptive parents to escape the Garibaldian uprising in Sicily. Setting up a studio, he pioneered early photography and worked prolifically until his death in 1924, his lens focusing not just high society and the bourgeoisie, but also on naval and industrial life in Malta and its common people. The archive, numbering some 40,000 glass plate negatives, is photographic patrimony for its unique socio-economic documentary of Malta.

Now, another man is making Richard Ellis’ work a lifelong passion. Photographer Patrick Fenech has been delving into the archive for the past three years, documenting it and helping save it for posterity. Here, we talk to Patrick about his love for the medium, the man and the future of this national treasure. 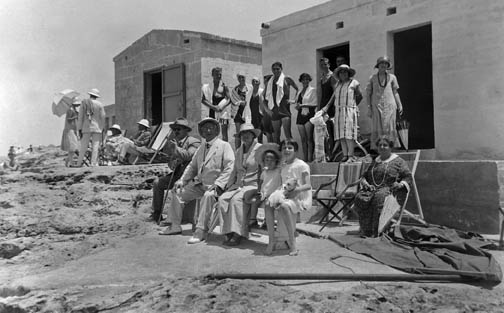 Sliema's most popular bathing spot, then as now: Exiles, back in c.1920s. (© The Richard Ellis Archive- Malta)

In brief, what is the Richard Ellis Collection?
This stupendous hive of glass and silver contains a unique record of life in Malta during the mid 1800s to early 1900s; a glimpse into an otherwise invisible past. The collection also contains photographs of other important practitioners like H.Agius, Gouder, Cassar and photography postcards of the period. The archive is an invaluable source of information for researchers of history and photography alike.

Give us an indication of the value and context of Richard Ellis’ work in his own era?
Richard Ellis established himself in Valletta in the 1860s soon after his arrival. These were exciting days for the medium as photography became a fad of the times, however, not to be short-lived. The collection reveals a wide gamut of subjects from the fashionable carte de visite to family portraits and post-mortem photography.

The main source of his business was generated from the British Navy as is evidenced in the meticulous registers he kept which still exist today. The Richard Ellis photography studios soon developed into an enviable business and the archives contain images and documentation of major industrial development projects in Malta which he mananged to secure in terms of contract photography. The Harper Area project, The dockyard project and the breakwater project are a few. His renown also landed him with a Royal warrant from the King George V. The Duke of Edinburgh had made Ellis his photographer in Malta by a warrant dated 1 March 1887, and he was also appointed photographer to Albert I, the third King of the Belgians in 1921.

What attracted you to the challenge of archiving and interpreting the Richard Ellis Collection?
A collegue of mine who is into publishing introduced me to the pesent owners of the archives with the intention of publishing a series of Richard Elllis photography books. I have a chronic voyeuristic relationship with photography, so I didn’t hesitate at the chance. I’ve buried myself in this unique archive ever since. At that point in my career, my obsession with photography had been in relation to contemporary art after a long period servicing clients in the editorial and marketing fields. So the Ellis collection was like a re-birth to me, an important brick in the wall which I’d missed – the processes and developments of early photography.

Give us some examples of the uniqueness of the collection.
Well, according to foreign experts of early photography archives, the R.E. collection is unique for its depth and breadth of subjects. This is a characteristic given Malta’s size since specialisation is very difficult in a limited economy. So, here we are dealing with images which together form a narrative similar to a commissioned socio-economic documentary, a kind of ‘from the cradle to the grave’ all under one roof. It also contains a unique collection of maritime images which Richard Ellis was renowned for. In fact we find his images in the 1989 publication, The Royal Navy at Malta. His images where sought after by well known editors. The National Geographic magazine Vol 37 No 5 – May 1920, carries photographs from the Richard Ellis archives illustrating our neolithic temples.

Which are your personal favourites unearthed to date?
Numerable images come to mind. An image that keeps on coming up is a scene from the lower decks of the HMS Fearless. A sailor is dancing with a real bear, the mascot on board the vessel, surrounded by his comrades. The Caravaggesque lighting is flitering from an opening on the upper deck and the image is sculpted in high and low tones. Another is that of a young black boy in a sailor outfit posing with two men (shipyard manager and ship agent) at the bottom of a dry dock in Cospicua next to a broken iron rudder of a mechant vessel. The vessel’s enormous stern, peppered with numerous rivets, engulfs the human characters; an exquisite metaphor of the industrial age.

As a photographer yourself, what do you admire most in Richard Elllis’ work?
Technique of course. In this early phase of photography technique was of paramount importance. The sheer impracticality and difficulty of producing an image in those days leaves me breathless when I see the outstanding quality of glass plate negatives made by this master of photography. Even more astounding are the multiple panoramas sometimes made up of 5 to 7 glass plates next to each other.

What have you learnt from the voyage of discovery in working on the collection?
How the past and the present are always interconnected somehow. When you consider photography today, it is still about the same principles; harnessing light, exposure and composition apply just as much today in the digital age.

Do you get get to know the man behind the lens?
I have empathised in a way with the man even though he is generations away from me. My affinity with his work has prompted me to do a series of contemporary photographs using his glass plate negatives, giving my present images in a kind of surrealist posthumous collaboration. This is a work in progress and am quite happy with the results so far.

What future do you see for the collection?
A museum of course. What I am trying to develop is the idea of a museum, an interactive museum designed to allow direct access to publications and quality exhibitions, which can also include contemporary exhibitions. The museum would run educational and cultural programmes, a library, provide online publications and so on. The museum could also work in tandem with the National Archives and collaborate with this public entity. It’s about rethinking the photographic archive in the 21st century.

Further Information
Photographs are The Richard Ellis Archive- Malta copyright. They are reproduced here with kind permission for the sole use of MaltaInsideOut.

Richard Ellis Photography Publications
A three-book series is published by BDL Publications and available for purchase online or from bookshops.