You are here: Home / People & Opinion / Tattoo You

Growing up, there was a time when tattoos in Malta used to be associated with subversion and sub-cultures.  Not any more.  Andrew Galea, a University student, writer, actor, and tattoo-aficionado, talks to local practitioners of a an ancient art form. 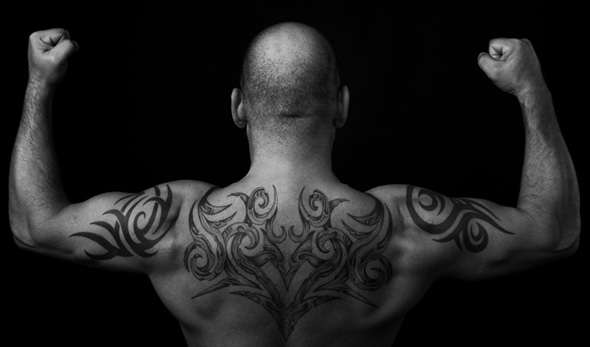 My body is a temple

You either love ‘em or hate ‘em.

But the act of indelibly marking skin is a centuries-old social phenomenon. Hell, Ötzi the Iceman, found in the Otz valley in the Alps, had approximately 57 carbon tattoos on his 5,300 year-old Neolithic body.

However Otzi’s primitive tattoos (that consisted of simple dots and lines on his lower spine, behind his left knee and on his right ankle) are early examples of something that has now developed worldwide into an Art of increasing popularity in recent years – prompting TV shows such as Miami Ink and La Ink,.

Tattoo artists now work in highly sanitary conditions, using disposable needles and professionally sterilized tools and (now encouraged by a growing acceptance and appreciation of the skill involved) are ever experimenting with technique and style to produce newer and more exciting high quality images.

The Tattoo industry inspires artists of all sorts – from the makers of hit television series Lost to the writer Stieg Larsson and his novel ‘Girl with the Dragon Tattoo’ as well as musicians such as Motley Crue with their album New Tattoo – and seems to be drawing more and more painters and youngsters.

In the wake of the passing of the renowned local tattoo artist Bobby Wood, credited with bringing the Art to Malta, I took the opportunity to speak to some of the artists helping to forge a future for tattooing in Malta, who incidentally all share rather varied experiences and taste in different forms of self-expression. [1]

One such artist is 21 year-old Cliff Falzon, qualified from Tattoo Academy in Middlesbrough, UK , who hints at the possibility of his opening a studio here in Malta – despite being frustrated at the conservative attitude still prevalent on the island.

Cliff entered the MCAST School of Art and Design in Malta and quickly realised that he wanted his life to centre on art, (his Mum used to be an art teacher for a primary school and his father was a flag-painter and builder).  It was not until he picked up a tattoo machine for the first time, and tried it out on his own skin that he decided he wanted to continue tattooing for the rest of his life.

“I got my very first own tattoo, a large half-sleeve of bees, flowers and colours, when I was 18, which shocked my parents at first,” he says, “but now that I’ve got so many more they’ve simply accepted them as part of me.”

He explains that, while he is open-minded about the different types of tattooing, his main focus is realism, portraits and colour. “There is much more to tattooing than simply copying a flash image downloaded off the internet or chosen from an album: Tattooing can be and should be used to connect a thought, an idea, an emotion or a memory with images to complete chapters in a person’s life.”

To this end Cliff says that “Mostly, I want to promote creativity and colours in the tattooing business in Malta. Coloured tattoos are a great way of expressing character and emotion. It gives it more emotional depth.”

Of course Cliff, also the vocalist in a band called Insurgence and an avid music lover of eclectic tastes, explains how inspiration is multi-faceted, with his drawing and painting being influenced by his music and vice-versa.

Kevin Busuttil of recently established Inseparable Tattoos in Naxxar, has a background in the visual and digital arts, whose work included producing music videos for artists such as Ira Losco, Tribali and Dripht.  Busuttil differentiates between people who get tattoos as a fashion statement, and the “real tattoo aficionados”, who use tattoos to heal emotional pain or capture a memory or simply to add to a collection.

“If I can’t do it in pencil , then I won’t do it with needles “ says Busuttil, adding, “One thing for sure – following some commercial TV show won’t help you become a tattooist or a tattoo artist.  It’s all about commitment , passion and practice.”

Of the tattoo circuit in Malta he says:   “I think there’s always the need of fresh blood in the tattoo industry – no pun intended!  But new artists should carry their work out seriously, with the right support from the authorities and a better sense of unity among artists, or Malta risks having more scratchers (illegal tattooists performing in unsafe conditions) then qualified real artists.”

Lawrence Calleja, founder of the long-established and much respected Inka Tattoo studios just off the Birkirkara bypass, has a background in art which includes oil-painting, air-brushing and other media.  He initially had reservations about entering the industry because tattooing, in his experience. can attract unsavoury characters.  He has often been approached by police to identify people with certain tattoos that might be his own work, or give character profiles as a consequence.  That’s one part of the job he doesn’t like.

He would, however, proudly tattoo his own daughter if she should so wish, once she’s turned eighteen (she has already expressed interest in the art).  There are just certain images he would refuse to tattoo on anyone, such as the Nazi swastika.

“Tattoos are a living art,” says Lawrence’s colleague Chris Ormond, himself experienced in various art forms, as well as being a seasoned drummer. “You feel like you’ve literally given birth to a breathing, pulsing thing.”

Though talking to so select a group of artists is by no means representative, it does indicate a movement in progressive art that is permeating the island, armed with a responsible ethos and a sense that sometimes a picture really does speak a thousand words.

Will Malta perhaps see the growth of its own Tattoo conventions? With its growing importance, and its gradual establishment as a totally viable form of self-expression, one wonders if tattoos are just another fashion trend or another potential facet of self-identity for the individual for years to come.

[1] Mr Wood’s two sons were unavailable for comment at the time of writing this piece.