Last Saturday, I found myself on a radio programme to talk about the Internet and Maltese society. I took my son with me because he loves history and technology. I thought there was something very poignant about an eight year-old digital native meeting-old fashioned radio for the first time. Even more so because of the chequered early eighties legacy of the building we were in, when broadcast media and political propaganda became one and the same thing. 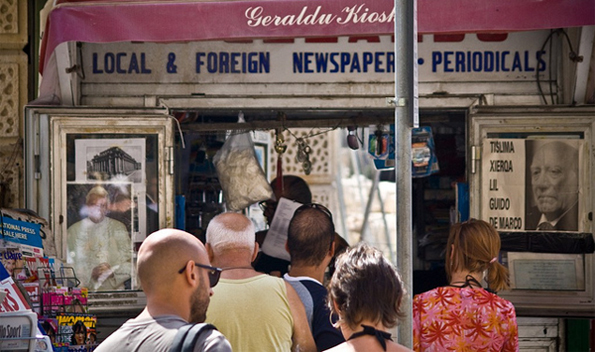 There's a kiosk serving food and gossip just round the corner

I spent a happy hour chatting to bloggers and geeks, experiencing first-hand how social media is gently moulding radio, making it more relevant, personal and downloadable. And my son drew cartoons of men with large heads and a larger microphone.

In Malta, distances are what they are, everything is cheek by jowl. You transit from one world to another in minutes. This Saturday morning may have been about radio, but Saturdays are also about fathers, sons and snacks. In twenty minutes, we’d headed south to the narrow streets of Vittoriosa and on to the Cafe du Brazil in the corner of Misrah ir-Rebha (Victory Square). A seat outside the cafe is a great vantage point for people-watching. It’s not quite the designer sun-glassed brigade of the Sliema front, so it’s easy to spot the odd tourist with the lens. But the old city is adapting to the new visitors. At the Cafe du Brazil, you now get a printed menu, and wraps and vegetarian options together with the more traditional, delicious, heart-burning ftiras. Trust me, on a warm late November day, there is no better place to sip a cappuccino, while the time away and ghost into your neighbour’s conversation.

Somehow, even after the toasted sandwiches, we found space for pastizzi from the band club and a green cassatella from the confectioner next door. The short stroll down to the water front was an excuse to marvel at the super yachts and burn up a few calories.

On our way home, we must have driven by three or four busy kiosks on either side of the road. All of them had people queuing up for something. Some had chairs outside. My head was still spinning in the space where history meets old radio and Facebook – about the state of the nation, identity in 21st century Malta, the vagrancies of ‘the smart island’. And from there, through some mental hyperlink, something must have clicked and I thought: “We are a kiosk.”

Think about this for a second, even if it’s no earth-shattering revelation. Maltese kiosks are all about snacks and networks. Food and conversations. Queuing for a bite to eat or the daily inky newspaper. We are a nation of islanders who eagerly embrace the new technologies and shiny devices, but also stick to what we know best because it’s always been there. We may love our Facebook and our wiis, but we equally love our hobz biz-zejt with chips from the guy in the van who is more in touch with the pulse of the nation than any journalist. We’re very 21st century but also earthy, stubborn, insular, opinionated. We will not blink if someone deposits one of these kiosks in our village square and will fiddle around with it, in the hope we can get something out of it. But the chances are that we will still drift to the little van and get our hands dirty, if we had a choice.