You are here: Home / A Glimpse of Rural Life in Urban Malta

Malta as it once was: agricultural life writ large

Only around three per cent of Malta’s population is engaged in agriculture, but the fruits of its labour can be seen at any veggie cart or shop. Some traditional Maltese farming villages though, like Mgarr in the North and Siggiewi near the west coast have new-found fame for celebrating their long and much loved ties with the land: Mgarr holds its strawberry fair in May, and Siggiewi held an agricultural bonanza last weekend (13-14 June). Judging by the numbers of non locals at both events, it seems rural life is becoming more in vogue, even among the town dwellers.

Siggiewi’s now annual agricultural fare kicks off on the Saturday evening at dusk and is a mishmash of a livestock show, heritage event and farmers’ market – and an excuse for local folk to get some air; it’s also a prelude to the villlage festa, just two weeks on.

The pageantry was a reenactment of the Grand Master handing over a falcon to Holy Roman Emperor Charles V as rental payment for the Maltese Islands. It was a charming cameo that enthralled the kids, as did another slice of history – the ancient threshing machine that took pride of place in the square. It rattled and hummed into action, man atop loading straw, and was soon spewing out chaff all over the gathered crowd.

A small tent housed old agricultural implements and canteen items that farmers would use in the fields to brew up coffee. In fact, you could see the brewing in action as nearby sat an old lady, in typical floral dress/apron, turning a coffee bean roaster over an open fire (see photo below). A stall next to her was serving the clove-flavoured coffee for free to an appreciative, and curious crowd.

Both evening and morning saw stallholders selling some genuine local produce, including thyme honey, certified organic olive oil (impressively with an EU accreditation on it) and lots of peaches and tomatoes, which grow well in the Siggiewi area. The olive oil producer, Ta’ Zeppi, said he offered agri-tourism tours; best in autumn though when the harvest is in and being pressed.

It’s heart-warming that Malta is beginning to relish its rural past, and to see skills, crafts and genuine Maltese produce appreciated by young and old, and locals and visitors alike.

To glimpse rural life, even if you miss the various fares, try an open-top bus ride on a London-type, double-decker bus with MaltaSightSeeing. They leave from Sliema ferries (the main front), and do a southern and northern tour visiting villages and less touristy localities. You can hop on and off, wander round a village and get the next bus onwards. 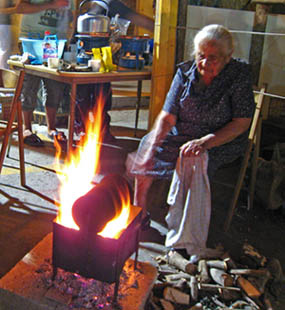