You are here: Home / The Malta Music Memory Project 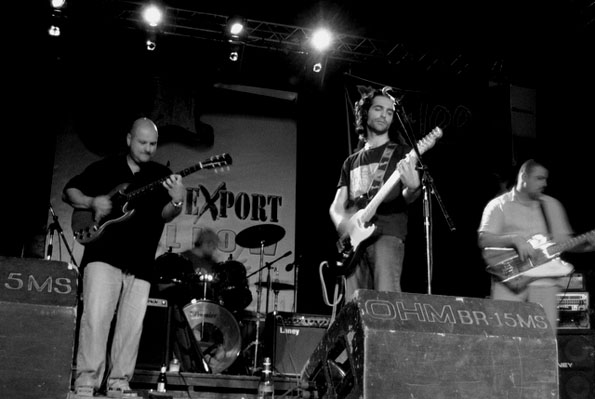 Memory in black and white. My brother Shaun leads his band, Syrup, in 2003.

Last autumn, in his office at the University of Hull, my colleague Toni Sant told me he wanted to set up a collaborative multimedia database of Maltese music. I did not pay much thought to the idea until he asked me if I would get involved if he secured some seed funding to kickstart the project.

Fast forward to 25th September 2010, and the Malta Music Memory Project or M3P will be launched through a symposium and networking event at St James Cavalier and followed by a concert of alternative music as part of Notte Bianca.

M3P is a totally different proposition to other projects I’ve been involved with. We’re using a wiki as the core database, and the same MediaWiki architecture and software that powers Wikipedia. Building a wiki from the ground up leaves you with no choice other than to ‘get your hands dirty’ with the technology as quickly as possible. Then, there’s initial ‘seed’ content to develop and source – enough material to use for a demo of what the wiki can become, if it truly becomes a collaborative tool. And then, a raft of issues relating to branding, editorial policies, archiving, intellectual property and live performances. Somewhere in the middle of a skype call, as more people started to engage, I realised that the project was starting to take a life of its own.

Why set up a database of Maltese music? And is there a need for it?

Perhaps the best answer to that is.. why not? In a hyper-local context like Malta, where community-building is at the core of the country’s fabric, but where online collaboration is very much in its infancy, M3P is a wonderful opportunity to understand how Maltese society is changing by having access to new tools that facilitate publishing, sharing and knowledge exchange. We can now preserve aspects of our cultural heritage that we may soon lose – perhaps because of the form of the media stored in; or simply because we need to rely on the living memory of the elderly. Like other specialist wikis, M3P will seek to preserve endangered cultural memory for future generations.

As we delve deeper, we realise how music links many disparate networks on the island, and spans over political, religious and socio-economic divides. The hope is that M3P can eventually develop into a living archive of works produced by Maltese musicians and associated aspects of popular culture, such as radio, television, theatre, visual arts, sports, dance, and other related arts and popular entertainments. And by music, we mean anything from traditional għana and band marches to hip hop, from electronica and jazz to rock and heavy metal.

M3P has many challenges. All social media utilities, including wikis, blogs and online social networking websites, support and thrive on content generated by their users, rather than a central authoritative source. Everyone with access to an Internet connection can engage and participate in building a database that will become part of the nation’s archives and memory banks. A common database that is constantly being enhanced, edited, updated. For the benefit of all users. Including those who will never update a single word on a page.

We’re a small nation. M3P may well be the first of several social experiments that can help determine how much we are actually prepared to share for the common good; and how much we care about legacy.