Rebecca Cremona, 26, film director and scriptwriter, has packed a lot into life so far. She studied comparative film and literature at the University of Warwick in the UK and went on to do her second degree in film directing at the American Film Institute and Art Center College of Design in Los Angeles. A short film she completed in early 2009, ‘Magdalene’ (trailer above), won her a Student EMMY and a Director’s Guild of America student award.

Rebecca is back on the Islands to tackle some contentious, contemporary issues in a Malta she feels is still finding its way post colonialism. Her project will be Malta’s first, home-grown, full-length feature film for the international market. Here, Rebecca lets us into her world, which she says is not all tinsel but more hard graft and determination. Here’s her story, ‘uncut’, in her own words.

1. When did you realise that film for you was more about doing than watching?
Whenever I am asked this question I remember a girls’ night when I was 16. We were watching ‘The Insider’ and the girls were chatting, nibbling away on snacks, and swooning over Russell Crowe. I was far more boring, and simply sat in front of the TV watching the film intently. One of the girls asked me what was capturing my attention. I told her it was the reflection on the car and how precisely it interacted with the camera and actor movement.

She looked at me stunned, called me a freak (rightly so), and still makes fun of me till this day. I think it’s safe to say that although at the time I knew I was into film – all my pocket money went on film magazines, video rentals and cinema tickets – it was at that point that I realised my interest was more than just a hobby. In fact, it is very rare for me to get engrossed in the story of a film. I am more likely to analyse its building blocks – the performance, editing, cinematography etc. Also, ‘makings of’ and interviews with filmmakers were always a very important aspect of a film for me – some times more interesting than the film itself!

2. What draws you to the medium?
What I love about film is that it’s a combination of art forms: literature, photography, music, acting, painting, philosophy…the list is endless. Through a film you create a little universe in more ways than one. First and foremost you are creating a universe on the screen, but even the work environment of every film is a unique universe within itself. Every film is a different experience you plunge into – from the subject matter you’re dealing with to the cast and crew who you are surrounded by.

I also love the fact that films – the mainstream ones at least – are watched all over the world. I remember going to the Galapagos where ‘Armageddon’ saved me from lack of conversation, because it was the only tangible thing in common I shared with a local. I suppose what I am saying is that it is film’s diversity which draws me to it. Of course the diversity also means that it is not the most stable of mediums to work within, however it is worth the risk in my opinion.

3. What films are special to you.
I always find it difficult to make a short list because there are so many different reasons to love a film. But I’ll try…
Y tu mama tambien – for me this film is entertaining, intelligent and very well done.
‘Monsoon Wedding’ – no matter how often I watch it, it moves me.
‘Spirit of the Beehive’ – I’ve never seen anything quite like the haunting atmosphere it manages to create.
‘In the mood for love’ – just an incredibly beautiful film.
‘The Diving Bell and the Butterfly’ – a story which gives you insight into what it is to be a human being, for better and for worse.
‘Thelma and Louise’ – a genre film which defies genre, very clever.
Then there are films which on a rational level I do not think are all that great, but for some reason they resonate with me. Examples of this would be ‘Stealing Beauty’ and ‘Great Expectations’ (Cuaron’s version).

As a general rule it is fair to say that I gravitate more towards art house and independent films, however, I still watch, and for the most part enjoy, mainstream cinema. I found ‘The Hangover’ hilarious, for instance.

4. Tell us about your first big break
Making a film is creatively, logistically and financially difficult. Because of this, every film you make which allows you to step up one ring of the ladder is a big break. Your first film is important because it will always remain your first film. The film that gets you into film school is important because it is likely to be taken as a foundation piece. The film that gets you into your first film festival will introduce you to the joys and torments of your primary bloodline – your audience. The film that gets you your first award is likely to spearhead your identity as a filmmaker. Then of course there are films which are more important to you personally than they are to anyone else and vice versa. I feel the need to go on this little tangent because becoming a filmmaker is a long process, and it is important to appreciate the importance of each step otherwise it is easy to give up or take short cuts which might do more harm than good.

If I were to answer your question directly I would say ‘Magdalene’ (see trailer above). Magdalene is a short film which I completed in the beginning of 2009. I consider it to be the ‘big break’ because it got me some prestigious awards, including a Student EMMY and a Director’s Guild of America student award. Just as important, it was picked up for distribution, so it will have a shelf life of seven years across different platforms (TV, iTunes, cinema etc) worldwide. 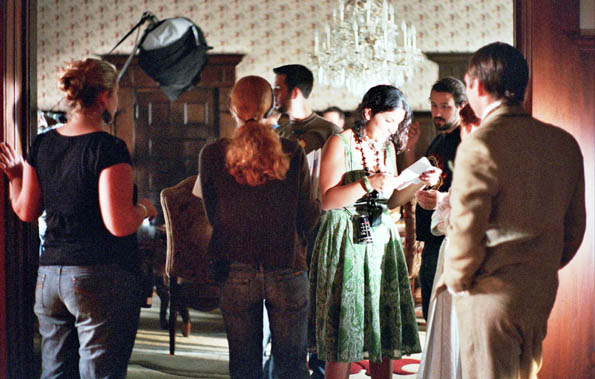 Rebecca Cremona and crew on the set of Magdalene

5. What was Los Angeles like – Tinseltown or a Tough town or both?
Definitely both. The good thing in L.A is that everyone is in the filmmaking business – from the waiter who brings you your coffee, to the big shot exec in the jaguar stopped by your side at a red light. Because you are surrounded by the industry at all times, and the turn around of work is so frequent, it feels like making films is a very normal thing to do, and indeed making them is easier due to the availability of resources.

The bad thing there is the same as the good one – that everyone is in the filmmaking business! Sometimes this makes you feel like you’re one in a sea of thousands, which you are. But many will tell you, to make it, or even simply survive, in the film industry it is not enough to be talented, you need to have the right attitude and a lot of resilience. And although it is necessary to surround yourself with people in the industry, it is equally necessary to mingle with those who have nothing to do with it – both as a source of inspiration and as a means of regaining perspective. For there certainly is Tinsel, and when it’s showered on you it’s important to remember it’s just tinsel.

6. You are embarking on what will be the first, full-length feature film for the international market made by a Maltese director/scriptwriter. Why choose a Malta story to tell? What draws you back here?

I get really annoyed when people say that being Maltese is a disadvantage in the grand scheme of things. I think in an increasingly globalised world, in which cultures are merging sometimes into a faceless molten pot, it is important for us to explore, express and safeguard our particular identity. It is also the thing which allows us to have an edge over countries with populations of millions, as cultural uniqueness is becoming an increasingly rare feature.

In fact, one of the strongest factors which made me want to be a filmmaker was that I wanted to tell and show Malta. Most imminently for nostalgic purposes – the Malta of my childhood is disappearing a little every day and being buried by buildings which look like computer renderings.

But on a more fundamental level, I really feel that we still have a post-colonial identity crisis, which we haven’t addressed. So although I read my first degree in England, and my second degree in Los Angeles, the intention was always to come back and tell a Maltese story. I think through the arts (and very prominently, architecture) we can discover this identity and explore what its contemporary expression is. When one thinks of Malta we think of the legacy of the Knights or the rural scenes captured by Edward Caruana Dingli, and this is all well and good. But it’s about time that we have a strong contemporary counterpart to that which is Maltese, and not an imported generic ‘modernity’.

7. Who have been your mentors on the way?
There’s a reason why award acceptance speeches are so long, and that’s because the amount of guidance and support filmmakers absorb is huge! But I’d love to take this opportunity to express my appreciation of peers, mentors and all those who’ve been supportive of my career so far.

Of course without the faith and support of my parents I would have never had the opportunity to follow my passion. Spielberg and his crew (my first proper set experience was on ‘Munich’) have been essential in advising me and giving me continued training and support. The faculty at Art Center are absolutely incredible, and although I never went to the University of Malta, the Film department here has been extremely helpful. I am happy to say, that this goes for most of the other local institutions, like the film commission and the film fund. Additionally, Bank of Valletta and Air Malta are sponsoring the feature film which is currently in development. All this support – infrastructural, educational, and moral – is so vital. Just the other day I was injected with the means, energy and morale to move forward by a woman who has nothing to do with film, but who simply believes in film and the work my crew and I are doing. I will be eternally grateful to her. As I am for the support of many others.